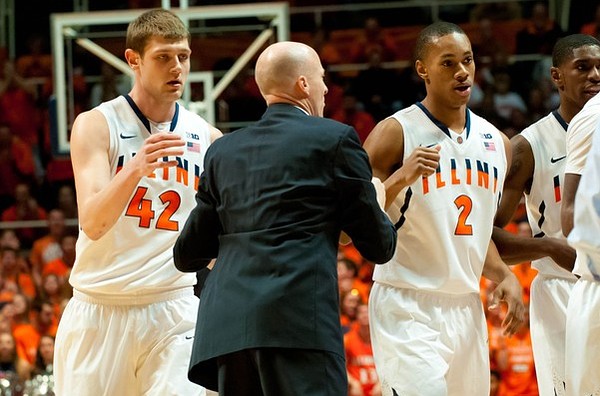 John Groce's Illini continued their torrid play this week, dispatching Purdue and Northwestern, teams they lost to earlier this season. Winners of four straight, Illinois has moved to No. 5 in my latest Power Rankings. Where does your team land? Find out in this post. Oh, and feel free to send me your thoughts, either in the comment box in this post or on Twitter (@BTNBrentYarina).

3. Michigan, (22-4, 9-4) – What's going on with Michigan's defense? In five February games, the Wolverines are surrendering 73.2 points per game, including 71 to Penn State, which averaged 56.3 points per Big Ten contest entering Sunday.
Last week: No. 3

5. Illinois, (19-8, 6-7) – One of the more impressive stats during Illinois' season-saving four game-winning streak: Brandon Paul, the team's leading scorer, has scored 10 or fewer points in three of the games. This is a great omen for the up-and-down Illini.
Last week: No. 6

6. Ohio State, (18-7, 8-5) – Perhaps no Big Ten team had a worse week than the Buckeyes, who needed a late flurry to dispose of short-handed Northwestern on Thursday at home and were blasted by Wisconsin on Sunday in Madison.
Last week: No. 5

7. Iowa, (17-9, 6-7) – Don't look now, but the Hawkeyes have won three consecutive Big Ten tilts for the first time in six years. Even better, check out this remaining schedule: at Nebraska; vs. Purdue; at Indiana; vs. Illinois; vs. Nebraska. A 4-1 finish isn't out of the question.
Last week: No. 7

8. Minnesota, (18-8, 6-7) – If Minnesota wants to finish strong and remain in the NCAA tourney discussion, it better hope Andre Hollins, its best shooter and leading scorer, reclaims his stroke. In the last five games, Hollins is 16-of-59 from the field (27 percent).
Last week: No. 8

T-9. Purdue, (12-14, 5-8) – A few weeks after looking like a sleeper, Purdue has lost five of its last six games. The low point: Two losses to Indiana by a combined 65 points. The 37- and 28-point defeats mark the first time Purdue has ever lost to Indiana by 20 or more points twice in the same season.
Last week: No. 9

11. Northwestern, (13-13, 4-9) – Factor in Northwestern's season-ending injuries, a season-long suspension and Alex Olah's concussion, the Wildcats suited up seven (!) scholarship players in Thursday's loss at Ohio State. Again, this is not Northwestern's year.