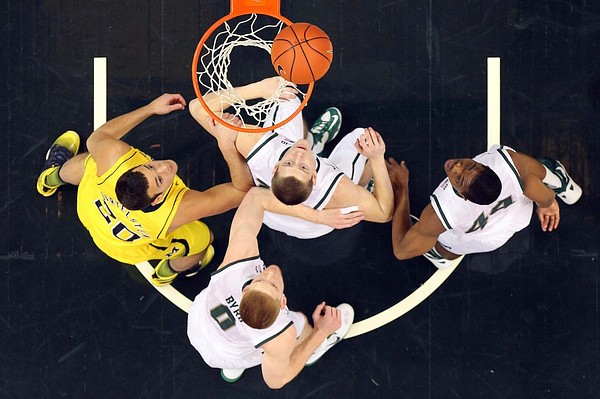 Wow. I can?t find a juicier way to open daily links than with a string of recent quotes from Michigan State?s Derrick Nick. Here?s just one gem:  ?I just feel like Michigan State is always the underdog and we don?t get the credit we deserve.? What? There?s plenty more like that right here. The Michigan State beat writers thank you, Derrick.

Oh, and you may have motivated Indiana, your foe on Tuesday, just a bit with some of these comments.

Losers of six of eight, Minnesota had is back against the wall with hot Wisconsin coming to town last night. And, the Golden Gophers responded with a huge overtime win that boosted their NCAA hopes.

Marcus Fuller of the St. Paul Pioneer Press credits point man Andre Hollins, who showed great heart in the gutty win. He was at his best in overtime, outscoring the Badgers himself in the extra period with seven of his 21 points, including 4-for-4 shooting from the free-throw line, in a 58-53 victory. This is just what the doctor needed for the Golden Gophers, according to the legendary Sid Hartman of the Minneapolis Star Tribune.

And then there's the Tubby Smith dance video.

For Wisconsin, it was a missed opportunity to put itself in position to make a run at an improbable Big Ten title. The Badgers can still do it, but their task is much more difficult-and unlikely–now. Wisconsin is 8-4 in Big Ten action, two games behind Indiana and Michigan State.

Jeff Potrykus of the Milwaukee Journal Sentinel has seen this before. He points out that last season, two losses to Iowa cost Wisconsin a chance to win at least a share of the Big Ten title. If the Badgers come up short this season, they can point to this loss to Minnesota.

Purdue plays at Indiana this weekend in a renewal of one of the greatest rivalries in college basketball-even though it isn?t much of a rivalry right now. The Hoosiers handed the Boilermakers a record-setting 37-point home loss in the first meeting this season. Still, Pete DiPrimio of the Ft. Wayne News-Sentinel takes a look 10 of the series? most memorable games.

Nick Baumgardner of MLive.com points out that during Robinson's skid, Michigan is being outscored 66.2-68.2 — and the Wolverines are 2-3. Although those five games coincide with the Wolverines' most difficult stretch of the season, Michigan clearly has suffered from Robinson's tapering production.

Go deeper, and you'll see how much value Robinson brings to Michigan, and how much pain a struggling Robinson causes. When he scores at least 10 points, Michigan's 15-0 with an average margin of 17.9 points per game. When he shoots worse than 40 percent, the team is 5-4, averaging 68.7 points per game — eight fewer than its season average of 76 per contest.

Which Big Ten has the edge coming down the stretch? CBS analyst and Michigna State icon Mateen Cleaves says none of them have an edge.

"It don?t mean nothin?," Cleaves told the Milwaukee Journal Sentinel?s Bob Wolfley about the remaining schedules of Michigan State, Indiana, Wisconsin, Michigan and Ohio State. "The game has to be played. That?s how wacky it is, not only in the Big Ten but in all of college basketball this year. The records mean absolutely nothing this year. We can throw them out. Rankings mean nothing. You have to win. You can?t look past any team. You have to take care of every game, one at a time. The Big Ten is a grind. Every game."

Have we heard this before?

This just in: The rich get richer. McDonald?s announced its All-American team-and Indiana has a member on it for the 27th time.

Do alternate uniforms help in recruiting? Michigan receivers coach Jeff Hecklinski doesn?t think so. I am glad he said that. I think this uniform craze has gone far enough. What?s the point? It?s been done by every school too often. We get it. It seems to have morphed into a game of ?one-ups-manship? on who can out-gaudy the next guy. Most of all: It has just become trite and boring. The shock/cool value has vanished.

[RELATED: Check out BTN.com's Clothes Calls sections for the latest on unifiorm news. ]

Woody Hayes would have turned 100 this week. Here?s a look back at a timeline of his life. It?s recommended you put on a Block O hat and wear a whistle around your neck while reading this. Or else. On the subject of the Buckeye icon, take a look inside the Woody Hayes Athletic Center with Doug Lesmerises of the Cleveland Plain Dealer. What?s not to like about these palatial digs?

Any list of breakout performers for the 2013 grid season must contain Penn State TE Jesse James. But one list does not. Too bad.

The Iowa coaching staff is starting to take shape, as the hiring of two new assistants was announced. Jim Reid was tabbed to work on defense. But where? He could be a co-coordinator; Reid was DC at Virginia before getting canned. Bobby Kennedy was tabbed to coach receivers after working at Colorado.

Huge win for Minnesota, should end bubble talk barring total collapse. And Wisconsin has a great shot to finish 14-4 if it holds on there.

My take: Yes, the Gophers probably punched a Big Dance ticket with the win. With a visit from the Buckeyes next, how will the Badgers respond?

Iowa's basketball team doesn't save the drama for its mama.

My take: Had Iowa lost at Penn State last night, any faint tourney hopes it had likely would have been dashed.

Andre Hollins played like Andre Hollins can and should. Imagine if Trevor Mbakwe did too in same game. #Gophers would be very tough to beat

My take: It seems this team hasn?t all clicked together for some time now. We know the potential is there for great things.

Just another 10-pt win for Ohio State that looked like a possible loss for 38 minutes. Buckeyes beat Northwestern 69-59.

My take: A win is a win, right? Northwestern still hasn?t won in Columbus since ? 1977.

My take: Newbill is a good one. Too bad the Nittany Lions couldn?t have gotten their first Big Ten win. I think this will be a solid team next year when Tim Frazier comes back. Lots of nice pieces.

My take: And they meet on Tuesday in East Lansing. Can?t wait.

Tubby Smith on game: "They wanted it but we had to have it." #Badgers

My take: This is a perfect summation of another great Wisconsin-Minnesota game.