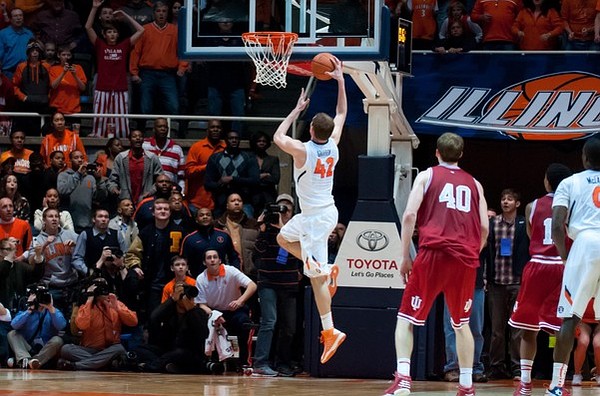 It's amazing what a week can do. Just ask Illinois. Fresh off a week in which the Illini upset No. 1 Indiana and tripped up No. 18 Minnesota, John Groce's team, for all intents and purposes, saved its season. Where does Illinois land on my latest Power Rankings? Find out in this post. Oh, and feel free to send me your thoughts, either in the comment box at the bottom of the post or on Twitter (@BTNBrentYarina).

5. Ohio State, (17-6, 7-4) – Already one of the nation's elite defenders, all of the sudden, Aaron Craft is becoming a force on the defensive glass. After averaging 3.3 rebounds in the first 19 games, the point guard is averaging 6.5 boards in the last four.
Last week: No. 4

8. Minnesota, (17-7, 5-6) – If the struggling Gophers, who have lost six of eight, weren't already in freefall mode, this upcoming schedule just might do it: vs. Wisconsin; at Iowa; at Ohio State; vs. Indiana. Clearly, Tubby Smith needs to figure out his substitution pattern.
Last week: No. 6

9. Purdue, (12-12, 5-6) – For Purdue to be successful, it needs D.J. Byrd hitting shots from outside. Well, on Saturday, the struggling senior compiled one of the worst lines in the Big Ten this season: zero points, one rebound, one assist, four turnovers and five fouls.
Last week: T-No. 7