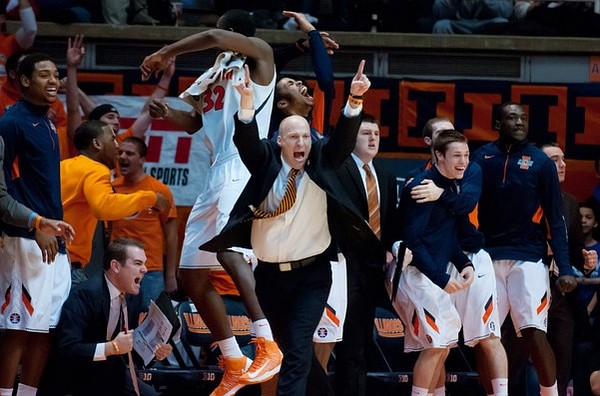 No school epitomized the state of college basketball in 2012-13 better than Indiana this week. The Hoosiers won a thrilling game over No. 1 Michigan on Saturday night to move into sole possession of first place in the Big Ten and atop the polls-only to suffer the low of lows last night by losing to an unranked Illinois team that had lost six of its last seven games.

The coming week surely has more twists and turns we don?t see coming, beginning with four gams on Saturday and two more on Sunday.

1. Illinois. The Fighting Illini were on the ropes entering last night?s game with Indiana, sporting a dreadful 2-7 Big Ten mark with losses to the likes of Northwestern and Purdue. But Illinois? win last night over No. 1 Indiana has pumped life into a team whose NCAA hopes were hanging by a thread. Now, Illini is alive ? and very dangerous-as long as they shoot well.
2. Michigan State. The Spartans have followed that narrow loss at Indiana last month with home wins over Illinois and Minnesota. But Michigan State needs to get Travis Trice (head) back and hope Gary Harris (back and shoulder) stays healthy. But, the biggest keys: Adreian Payne must dominate and Keith Appling must lead.
3. Ohio State. Yes, the Buckeyes lost a tough overtime game at Michigan on Tuesday in what may have been the game of the year in the Big Ten to date, but they obviously played well enough to win. This is a tough team that plays rugged defense and is on par with Michigan State and Wisconsin. And Deshaun Thomas is a star among stars in the conference and is capable of single-handedly taking Ohio State to victory over any team.

[ RELATED: Need to brush up on the Big Ten basketball tiebreakers? Read them here. ]

1. Indiana. After a stunning home loss to Wisconsin in January, the Hoosiers reeled off six victories in a row that was capped by that huge home win over No. 1 Michigan last Saturday that set Bloomington on fire and conjured national championship dreams. In the process, Indiana moved back to No. 1 in the nation for a second time this season. Alas, all of that mojo vaporized with a confounding 74-72 last night at Illinois. Ask yourself this: Who has Indiana beaten that it wasn?t supposed to beat this season?
2. Minnesota. The Golden Gophers opened Big Ten play 3-0 but have lost five of their last seven games. The Minnesota backcourt is struggling, as turnovers have become a major issue. And the bench lacks production, too. Want more? Trevor Mbakwe is in a funk. Add it all up: The Gophers are floundering. But a visit from Illinois on Sunday could put some spring in their step.
3. Iowa. The Hawkeyes continue to suffer tough losses. The most recent being a double-overtime setback at Wisconsin on Wednesday, dropping Fran McCaffrey?s crew to 3-7 in the Big Ten. Still, Iowa is close to a breakthrough and it could enjoy a strong finish to the season thanks to a kinder and gentler schedule.

1. The battle for Big Ten Player of the Year remains muddled. Who is it? Indiana?s Cody Zeller? Michigan?s Trey Burke? Ohio State?s Deshaun Thomas? My guess is that whoever leads his team to the regular-season title will claim the hardware. Burke gets the nod from me ? for now.
2. Iowa is gonna make the NCAA tourney. Yes, I did just type that. I know the Hawkeyes are 3-7 in the Big Ten. I know they have struggled in close game. Still, a favorable schedule enhances Iowa?s chances to earn its first bid to the NCAA tourney since 2006. Book it, Herky.
3. Cody Zeller must demand the ball. The big fella took just six shots in the loss at Illinois. The Hoosiers are a much better team if they work inside-out, running the offense through Zeller who can shoot in the paint or kick the ball out to any number of terrific shooters.

[ENTER TO WIN: The Buffalo Wild Wings Trip to the Tourney Sweepstakes. ]

1. Illinois 74, Indiana 72. Let?s call this the biggest upset of the Big Ten season. That?s easy. The Hoosiers looked to be in control, building a lead as big as 14 points in the second half. But Indiana didn?t put away the Illini when it had a chance, and Illinois chipped away. Then, with the score tied, the Illini?s Tyler Griffey was left uncovered and hit a wide-open layup with 0.9 seconds left for the winning points. Stunning.
2. Michigan 76, Ohio State 74. The overtime thriller may have been the ?game of the year? to date in the Big Ten. The end was filled with a bit of controversy, as some felt Aaron Craft should have been whistled for a flagrant foul on Glenn Robinson III. Then, some felt Craft was fouled on the last shot of the game. Regardless, this was a great back-and-forth thriller.
3. Indiana 81, Michigan 73. Rarely do ballyhooed matchups live up to their billing. Well, this clash between No. 1 Michigan and No. 3 Indiana sure did. The win propelled the Hoosiers to No. 1 in the polls, fueled by perhaps Cody Zeller?s best game of the season. The big sophomore finished with 19 points and 10 rebounds. Victor Oladipo also impressed with 15 points.

[RELATED: We stockpile videos of all of this season's dunks. Watch 'em all. ]

1. Indiana at Ohio State, Sunday, Feb. 10. This is the first of two meeting between these stalwarts, with OSU travelling to Bloomington on March 5. This one of four remaining huge road games for Indiana, which must also go to Michigan State, Minnesota, and Michigan. The Buckeyes have fallen just once at home, losing to Kansas in December.
2. Michigan at Michigan State, Tuesday, Feb. 12. The Spartans owned this series for years, but the Wolverines no longer are pushovers. Can Michigan, which already has stumbled at Ohio State, match the toughness and intensity of Michigan State? The Spartan big men will pose a challenge for the Wolverine interior players. This likely will be the first time the teams meet ranked as Top 10 squads. Oh, MSU plays in Ann Arbor on March 2 or 3.
3. Michigan at Wisconsin, Saturday, Feb. 9. Bo Ryan and the Badgers are almost unbeatable in the Kohl Center, but Michigan State has won there this season and Iowa took the Badgers to double overtime. It will be pure joy to watch the sticky Wisconsin defenders try to slow down the Wolverines? arsenal of weapons. Oh-by-the-way, if Michigan wins, it likely will move to No. 1 in the polls-again.