Did You See This? Oladipo's missed alley-oop 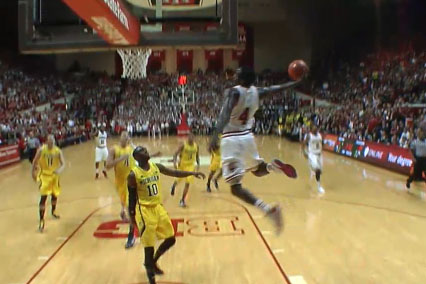 Here's a first: Writing a post about a missed dunk. Never thought the day would come when such a thing would be worth highlighting, but no one could have guessed Victor Oladipo would come so close to completing an absolutely silly alley-oop. Watch the near highlight-reel dunk and a replay of it in this post. Or, hey, just check out the image of it on the video player here.

[ RELATED: Looking for a particular dunk? Find it in our Dunk Archive ]

Honestly, look how far he reached just to catch the ball. And, somehow, Oladipo sounded frustrated in his postgame presser that he didn't finish the play, saying: "I don't know how I missed it, man. I was so close."

No worries, though, because No. 3 Indiana still took down No. 1 Michigan.

Check out what others were saying about Oladipo's near highlight:

If there was ever an #SCtop10 for a missed dunk, Victor Oladipo just did it. Wow. #MICHvsIU

If that dunk would have gone in they would have had to rebuild Assembly Hall from the ashes, and named it Victor Oladipo Memorial.

If Victor Oladipo had thrown that down I think the building might have crumbled.

can't stop watching Oladipo's missed dunk. what's his wingspan? http://t.co/UXpA1eEC how many times will @JayBilas mention it at the draft?

@TheBigLead I think it was the dunk of the year even though he missed!

If Victor Oladipo would have made that dunk last night we'd be watching the replay for the next 10 years. #Hoosiers