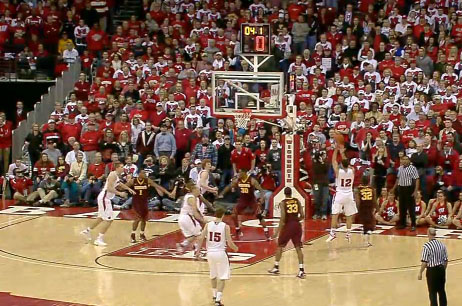 Traevon Jackson beat the shot clock in the final seconds to lift Wisconsin past No. 14 Minnesota on Saturday. Or did he? This one was about as close as buzzer-beaters come. Remember, if the shot clock buzzer sounds and the ball has yet to leave the shooter's hand, it's a violation. On this play, it's hard to tell if the ball is out of Jackson's fingertips before the horn goes off. See for yourself in this video and check out a screengrab in this post.

Here's a screengrab of the shot. Again, a violation occurs on the horn, not the shot clock hitting 0. That's so incredibly close, whether you go off video or just look at the still photo. For what it's worth, Minnesota's Andre Hollins wasn't so sure:

Losing to Wisconsin on a shot that was still in his hands <<< #cool ?..time to see what we are made of. Love this team #Gophers

After the shot, Minnesota still had a chance to tie the score as Wisconsin fouled Trevor Mbakwe, sending him to the line for two free throws. Mbakwe injured his wrist on the play, however, so Wisconsin coach Bo Ryan selected Rodney Williams to attempt the free throws. Williams hit the first but missed the second, and Sam Dekker corralled the rebound to seal the win.

This isn't the first time there's been a controversial buzzer-beater at the Kohl Center. Remember this one from last season?