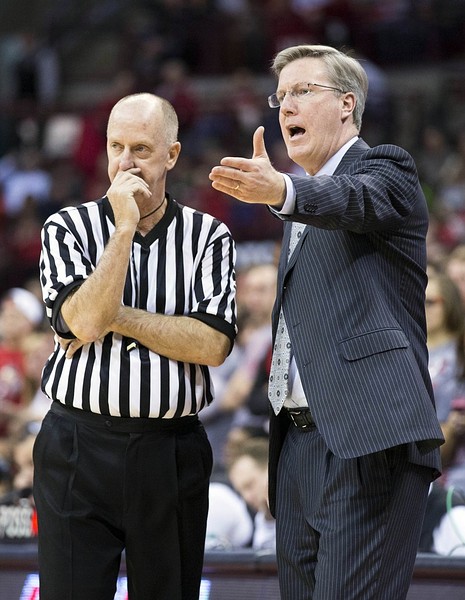 It?s that time of the week for me to reach into my mailbag and answer some of your questions. The buzz is about basketball, which makes sense as the conference season steams toward the midpoint with four teams in the thick of the race: Michigan, Indiana, Michigan State and Ohio State. So, let?s get right to your questions.

Not a question, just a shout out. It was fun to look at the projected mock brackets. I see Michigan is a No. 1 seed and Michigan State is a No. 3 or No. 4 in most of these brackets. Once my Spartans beat Michigan twice, that will be reversed! – James Hart

Time will tell, with so many games left to play. But I think there are five Big Ten teams that are likely locks to make the Big Dance: Michigan, Indiana, Michigan State, Minnesota, Ohio State. Three more seemingly have a good shot: Wisconsin, Illinois and Iowa. Purdue will be hard-pressed to make the NCAA tourney, while Penn State, Nebraska and Northwestern are long, long shots. But know this: I think an 8-10 Big Ten record many be good enough to get into the Big Dance this year because of the strength of the Big Ten.

What is with the Tom Crean handshake (or lack thereof) at the end of games? Has he taken lessons from the Harbaughs on that, too? When he shakes hands with opposing coaches, it seems as if he would rather be doing anything but shaking their hands. – Don Cerri

Boy, Crean?s postgame handshakes are getting a lot of attention ever since his fleeting "shake" with Bo Ryan after an Indiana home loss to Wisconsin a week or so ago. But I watched Crean shake Penn State?s Pat Chamber?s hand after a recent game, and it also was a quick exchange. So, win or lose, at least Crean is consistent!

Shannon Scott proved his ability to hit a clutch last-second shot last weekend. He should have been on your list. – Jim Jackson

Yes, you could have made a case for Scott. And several readers felt I was way off for not including Michigan State?s Keith Appling. He, too, would have been a nice addition. But, when a list is seven deep, some good names will get left out. I still will stick with Ohio State?s Deshaun Thomas at the top of my list. He gets the ball on my team with less than 10 seconds to go and I?m trailing by one or two.

It's a little early for such prognostications (and irrelevant), so why waste my (and your) time by looking at these mock brackets? It is thoroughly pointless and doesn't matter until it happens. Oh, and I think Indiana will wake up and realize how good they really are. – Crimson Shouter

But looking at mock brackets sure is fun, isn?t it? It?s all about the speculation and anticipation of what may happen in a month or so. The conjecture and predictions in some ways are as much as the actual event. As for Indiana, yes, the Hoosiers figure to get better. The game this weekend against  Michigan State will be a nice test. The Spartans? toughness will push the Hoosiers. Indiana has so many weapons on offense, but the Hoosiers need to play a bit tighter on defense and rebound more consistently. This team is loaded and has a great shot to win a national championship.

Is there a reason why Iowa doesn't get any/much attention from you. – Rich Armbruster

I think I give the Hawkeyes a decent amount of love. Yes, the football season was, well, trying. But there has been a lot to write about during hoop season, as Fran McCaffrey?s third season in Iowa City is shaping up nicely. And the future is bright with freshmen like Mike Gesell, Adam Woodbury and Anthony Clemmons. Plus, Aaron White and Josh Oglesby, who has to start hitting treys at some point, are just sophomores. So, consider this another kiss blown to Herky!

Thumbs up for the East-West concept (see last week's mailbag for details) as far as naming the divisions. One thought, however, is that the Michigan State vs. Michigan and Michigan vs. Ohio State games must be on the schedule every year. If there is any intent to mess with either of those two traditional rivalries, then it's thumbs down from here! –  SaginawSpartan

Agreed. Those are iconic rivalries that must be played each year. All reports seem to indicate that geography will play a big role in shaping the divisions, so many rivalries seemingly will have a good chance to be preserved.

Looking at a West Bracket in these mock brackets, there seem to be very few good teams from out there. Unless there is a special reason, don?t you think teams should play in their locale? – Bob Chorba

It is a nice to play near your campus, and the pod system in the early rounds was devised to keep teams closer to their campuses in some instances. It?s about selling tickets and filling arenas. But in the Sweet 16 round, teams are scattered to their assigned regions. And, in the end, it?s the seed that matters more than where you play. So, a highly-seeded Big Ten team likely may find its way out west.