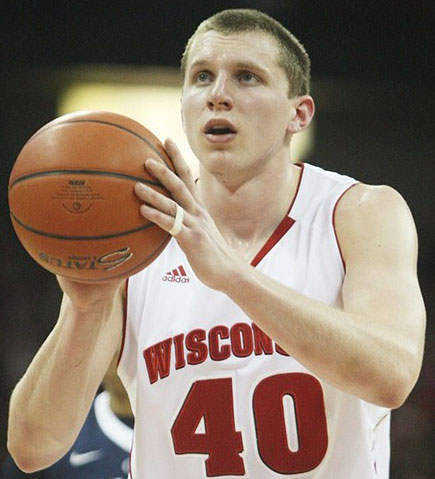 Wisconsin big man Jared Berggren knows what?s at stake when Minnesota visits the Kohl Center on Saturday. The Badgers need a win-badly. Following a surprising 4-0 start in Big Ten play, Wisconsin has lost two games in a row, at Iowa last weekend and against Michigan State on Tuesday.

Now, it?s about getting Wisconsin (13-6 overall, 4-2 in the Big Ten) back on track and finishing his standout career on a positive note with another NCAA tourney appearance. But the Badgers will face a desperate Minnesota team on Saturday that has lost three in a row.

After redshirting in 2008-09, the 6-10 Berggren has slowly developed into one of the Big Ten?s top players. He has made himself a deadly shooter from long range since arriving from Princeton High in Princeton, Minn. He also has the best moves in the paint for a Badger since Mike Wilkinson, making him a dual threat that?s difficult to defend.

But Berggren is looking to get on track after scoring just five, eight and nine points in each of the last three games, hitting only 1-of-11 shots (9 percent) from three-point range and 9-of-27 shots overall (33 percent). I caught up with Berggren as he prepped for the Golden Gophers.

Q: What do you attribute to this funk?
A: I wish I had a good answer. Part of it, you have to give credit to the defenses we have been playing. They have been doing a good job contesting my shots. I also have had some open looks that I just have not knocked down. You just have to get in the gym and get some extra shots, try to regain the stroke, re-groom the shot and shoot with confidence. We need to keep the running our offense to find me some open looks. I just have to step up with confidence and start knocking shots down.

Q: Confidence isn?t an issue for you, right?
A: You have to keep firing when you find yourself in a slump like this. You can?t change your whole game just because you haven?t had a few shots fall down. You need to keep being aggressive and doing what has been successful for you in the past. Teammates will keep finding me and we aren?t gonna change what we are doing on offense. There are some adjustments to be made as far as shot selection as a whole team. For myself, I just need to keep looking to be aggressive. The shots will start falling and we?ll get this thing rolling again.

Q: Is the point guard play rounding into form with Traevon Jackson and George Marshall taking over for the injured Josh Gasser?
A: Losing Josh (Gasser) at the start of the year was a major blow to us. We knew we were gonna have to have other guys step up and mature quickly. I think they have done a pretty good job of that. Every day is a learning experience, and they are picking up the nuances of the game each day and learning new things. The more experience they get in Coach Ryan?s system, learning how he likes things done and the things he points out in film sessions, the better.

And they are receptive to coaching. They are hungry to learn and are putting in extra time in the gym, asking questions, working with each other and trying to figure out how they can get better and help the team. Defensively, they are getting some things figured out. Offensively, they are starting to get some confidence. George (Marshall) had a good game at Iowa for us down the stretch and can build off that. Trae had a great game at Indiana. They are showing what they are capable of and will keep growing. They will help lead this team.

Q: Any reason why you have lost two in a row?
A: The Iowa game was a poor performance in the first half. We turned the ball over a lot, which let them get some things in transition off of easy run outs. We let things get out of hand and got away from playing our style of basketball. We played better in the second half, but we dug too deep of a hole. With Michigan State, that was disappointing being that it was at home.

Michigan State is a very good team and we take pride in winning at home and didn?t get it done. We played well defensively, rebounded well and did well on hustle and toughness plays. But offensively, we shot the ball poorly. And we really struggled at the free-throw line (7-of-18). That really cost us. I shot the ball just horribly (2-of-8). We shot something like 38 percent from the line, which is awful. It is hard to win defensive, grinder games when you shoot like that.

Q: How good is the Big Ten?
A: Every night can be a battle no matter who you play. We started off with close games vs. Penn State and Nebraska, two teams toward the bottom of the standings now. Still, they all play hard and give you a good fight each night. We have seven of our next nine vs. teams that are ranked. The depth and strength of the league makes it a battle each night. You have to be ready to work each night.

Q: What makes you guys so tough at the Kohl Center?
A: We do a good job feeding off our crowd. Our crowds are good and always there to support us. Some of it is just a mind-set, defending the home court. You get a feeling it will be hard for anyone to come in there and beat you. We have taken a few losses at home, Michigan State and Virginia. We take pride in winning at home. I don?t know if there is any secret or magic to it. It?s just playing with confidence, the crowd behind us. We are comfortable there, which helps with shooters. We tend to shoot better at home.

Q: How big is the Minnesota game?
A: It?s huge. It?s the next game. We have two losses in a row. We have to turn it around. It?s a tough stretch coming up. It?s big to get our confidence back and get back on the winning side of things.

Watch an interview with Berggren from earlier this month below.