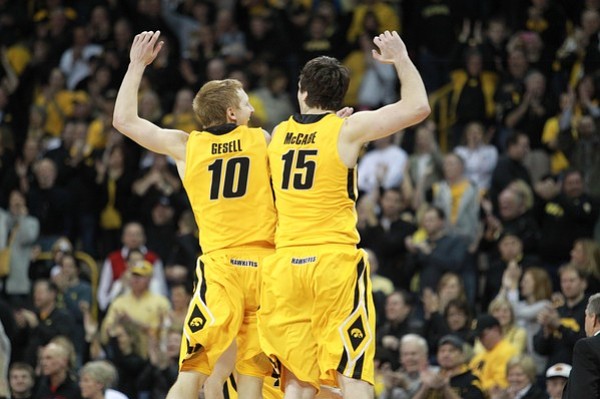 The Super Bowl matchup is set! But bigger news on the college front came from the recent NCAA convention, when it was announced that the governing body was altering rules to make them more user-friendly. Nice. Let?s start the daily links there.

Among changes announced include the elimination of restrictions on private communication between football coaches and recruits. That includes phone calls, social media and texting. While some think the move — which goes into effect August 1 — could make the recruiting process more intrusive for players, others like the change because it ends rules that were difficult to enforce.

Michigan coach Brady Hoke gives the change a thumb?s up.

Each time, someone is writing up a report and then sending it back to you.

MORE DIVISION DEBATE: The great Big Ten division debate just won?t end. Next up with an idea: The great Tom Oates of the Wisconsin State Journal.

HARBUAUGH TO SUPER BOWL: With Jim Harbaugh in the Super Bowl, expect a flood of ?Harbaugh at Michigan? memory stories. Here?s an oldie but a goodie from Mitch Albom from back in 1986 about Harbaugh and his special relationship with Bo Schembechler.

Also, remember when many felt Harbaugh had a good shot to be Michigan?s coach after Rich Rodriguez was fired? I wonder how that would have worked out.

TV DOLLARS: The TV money is rolling into the Big Ten. And many schools are benefiting, including Minnesota.

Look at some of the obstacles O?Brien overcame to succeed like few envisioned: The Freeh Report; player defections; NCAA sanctions; an 0-2 start. Nonetheless, O?Brien rallied this team to an 8-2 finish. Amazing.

NO. 1 WOLVERINES? Michigan is good. Really good. It makes you wonder: Are the Wolverines the No. 1 team in the nation?

Nick Baumgardner of MLive.com is rubbing his chin, wondering. Me, too. But honestly, as Baumgardner notes, does it really matter who is No. 1 at this point in the season? Well, no. But, it is kinda prestigious-and it makes for fun debate. Still, it is amazing to see how far John Beilein has taken this program.

WISCONSIN'S SILVER LINING: Yes, Wisconsin suffered its first Big Ten loss at Iowa on Saturday. But, it may have found a key player in redshirt freshman point man George Marshall.

He notched 20 points in just 15 minutes, showing the Badgers have two legit options at point with him and sophomore Traevon Jackson with Josh Gasser out for the season with injury.

HE DID WHAT?! In a unique twist, Northwestern coach Bill Carmody instructed his team to foul Jordan Hulls-an 87-percent free-throw shooter–and put him on the line in the Wildcats? loss to Indiana on Sunday.

Carmody?s thinking: Hulls was in a slump at the charity stripe. He was correct. But Hulls came through down the stretch to get Indiana back on track after that stunning home loss to Wisconsin.

HONORING AN IOWA LEGEND: Iowa honored the late, great Chris Street, who perished in an automobile accident 20 years to the day, before Saturday?s big home win over Wisconsin. Here is a nice video of the event.

Mike Hlas of the Cedar Rapids Gazette says Iowa played like it was being captained by Street in notching the huge win over the Badgers, the Hawkeyes? second victory in succession.

[ RELATED: Did You See This? Iowa honor Chris Street ]

This could be the type of win that sparks this young-but-promising Iowa team on a run after an 0-3 start in the Big Ten.

TIME TO BOUNCE BACK: Sid Hartman of the Minneapolis Star Tribune says the Golden Gophers need a healthy Rodney Williams and Joe Coleman if they wanna compete for the Big Ten title. And neither was 100 percent in that home loss to Michigan on Thursday.

Minnesota is on a two-game losing skid and needs to get back on track-quickly.

My take: Amaze your family and friends with this tidbit.

Quite a season already for the Crean-Harbaugh coaching family. IU opens preseason No. 1, Harbaughs are going to meet in the Super Bowl.

My take: Can it get much better? Maybe a national championship for Indiana?

Quite a season already for the Crean-Harbaugh coaching family. IU opens preseason No. 1, Harbaughs are going to meet in the Super Bowl.

My take: Well, this may be one reason for the loss to the Hawkeyes. That, and Iowa is pretty good, too.