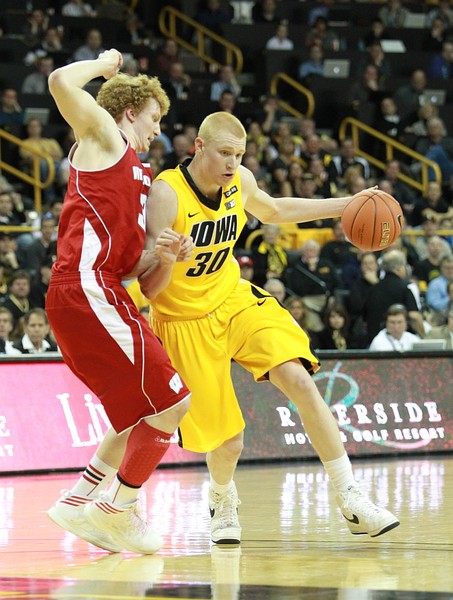 Aaron White scored 17 points and Iowa hung on to beat Wisconsin 70-66 on Saturday night, knocking the Badgers out of first place in the Big Ten. Devyn Marble added 13 for the Hawkeyes, which picked up their biggest win of the season on the 20th anniversary of the death of former player Chris Street.

George Marshall had 20 points, all in the second half, but the Badgers became the last Big Ten team to lose a league game. Wisconsin fell a half of a game behind Michigan State in the standings with the loss.

Jared Berggren drives from outside for powerful dunk:

Aaron White slams it down:

FINAL: Aaron White scored 17 points and grabbed seven rebounds to lead Iowa to a 70-66 win over Wisconsin on Saturday at Carver-Hawkeye Arena in Iowa City. Iowa (13-5) shot 24-of-29 from the free throw line. Other Iowa scorers in double figures included Anthony Clemmons (10 points), Mike Gesell (11 points), and Roy Devyn Marble (13 points). George Marshall scored 20 points and made 7-of-10 shots from the floor for Wisconsin (13-5) in the game. The Badgers also got a solid contribution from Sam Dekker (13 points). The Hawkeyes never trailed in the game and led by as many as 20, which came with 3:18 left in the first half.

HALFTIME: There were no free points for Wisconsin, as Iowa clamped down defensively to hold the Badgers to 23 percent shooting in the first half and has a 34-18 lead going into the break. The Hawkeyes didn't trail once in the first half and they also led by as many as 20 points. Trailing 7-4, Wisconsin went cold, going 2:45 without a point while Iowa went on a 7-0 run to open up a 10-point lead. Iowa's Mike Gessell led all scorers with nine points and Aaron White added eight points and four rebounds. The Badgers' Sam Dekker had a big first half, with five points and three rebounds.