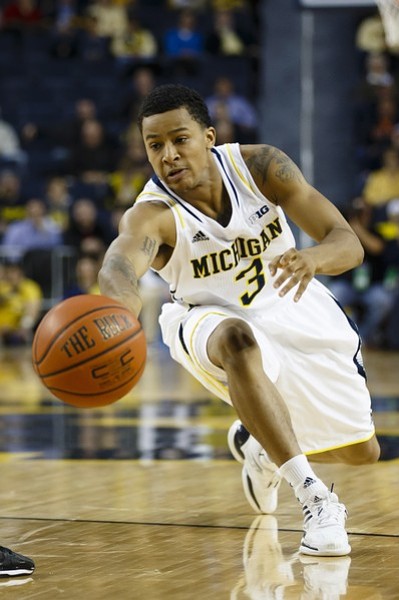 If it?s Thursday, it must mean there is a big game in the Big Ten, right? Yep. Brace yourself for No. 5 Michigan visiting No. 9 Minnesota. Let?s begin daily links right there. This will be the first meeting of top-10 teams in the venerable Barn since-are you ready for this?-1977.

Go back in time in this piece from Marcus Fuller at The Pioneer Press.

While watching yet another big, Big Ten game, keep an eye on the point guard battle between Minnesota?s Andre Hollins and Michigan?s Trey Burke.

It?s the clash that may decide the game. Burke knows his decision-making will be key.

As Burke, goes, so goes Michigan. And Burke didn?t go well in a loss at Ohio State on Sunday, hitting just 4-of-13 shots with four assists and four turnovers. But history says Burke does well vs. Minnesota. Last year, he hit 19-of-25 shots and notched 57 points vs. the Golden Gophers.

Minnesota, Michigan, Indiana, and Ohio State all are 3-1 in league action while Michigan State is 4-1, and all are chasing 4-0 Wisconsin. So, the loser tonight will have work to do.

Indiana Nation is still reeling over that home loss to Wisconsin. How could it be? Indianapolis Star writer Terry Hutchens is still shaking his head, too. The hoops world tells us the Hoosiers have a lot more talent-A LOT-than the Badgers. So, was Tom Crean out coached by Bo Ryan? Hutchens won?t say that. But he will say ?at some point, players still have to play.?

Michigan State took care of business at Penn State last night, but the real story was the pregame hotel tussle between teammates Adreian Payne and Branden Dawson that resulted in both being benched for the first half. Nothing to see here. Move along. Just college fellas being college fellas. Payne did seem motivated when he got in, scoring a career-high 20 points.

Illinois looks to pick itself up tonight vs. Northwestern after a debacle in Wisconsin over the weekend. This, ladies and gentlemen, is a must-win for the Illini. What type of mental toughness does Illinois have? Hmmm. John Groce thinks this will be a nice test of that. And, he?s right.

The RPI has Cedar Rapids Gazette columnist Mike Hlas scratching his head. Join the club. But one thing is apparent for the Hawkeyes: Their uber-soft non-conference schedule could be a big detriment when it comes to NCAA tournament selection time. The remedy? Win some games vs. quality Big Ten foes. Up next: a visit from Wisconsin. Perfect.

Is Joe Paterno?s legacy getting lost amid the success of Bill O?Brien? This wouldn?t have seemed possible about a year ago. But now? Jerry Sandusky is in prison. Paterno is dead. His statue is in storage at an undisclosed location. And, remarkably, the university's signature program appears to have regained its footing, as Frank Fitzpatrick of the Philadelphia Inquirer notes.

The entire Nebraska defense bears watching in the spring. And a position to pay extra attention to is linebacker, with all three positions needing new starters. Will Compton, Sean Fisher and Alonzo Whaley are gone. Redshirt freshmen like Michael Rose, Thomas Brown and Jared Afalava have a shot to emerge. Vets like Zaire Anderson, David Santos and Trevor Roach also figure in. The defense HAS to improve. It just has to.

It?s never good to dwell on negatives. That?s why Wisconsin A.D. Barry Alvarez has moved on from the departure of Bret Bielema and the loss to Stanford in the Rose Bowl.

Of note in the nice piece by Andy Baggot of the Wisconsin State Journal: Alvarez and Bielema still have not spoken.

?Someday I will,? Alvarez said. He went on to say about the fan backlash toward Bielema after his shocking departure: "You're a head coach and you leave for what people perceive as, at best, a lateral move," Alvarez said. "It's like a slap in the face to them."

"I just didn't like some of the things that went down afterwards or how he did it," Alvarez said, citing Bielema's public complaint regarding salaries for assistant coaches. "You made the decision to go to Arkansas. Go to Arkansas. Good luck. You don't have to take any swipes. I just didn't appreciate that."

This is juicy stuff, people. Enjoy.

New Illinois offensive coordinator Bill Cubit already is at work. And he has some decisions to make. Among them: Who will play quarterback? Will it be Nathan Scheelhaase or Reilly O?Toole? An offensive line also must be established, and the unit also needs a coach with Luke Butkus departing for a spot on Ron Turner?s Florida International staff. Roll up your sleeves, Bill.

Remember A.J. Barker? The Minnesota receiver who left school in a huff last season after alleging mistreatment and wrote a wordy Internet diatribe about it upon his departure? He landed at Houston and, well, things aren?t off to a great start.

This just in: annual spending on sports at public schools in major conferences has surpassed $100,000 per athlete. Knock me over with a feather.

Please, tell me you aren?t shocked. Among the big numbers are bloated coaching/administrative staffs and big incomes. But, bottom line, the NCAA can?t legally do anything to limit salaries of coaches. But all this talk sure sounds good.

One thing is clear. Tim Miles refuses to tolerate lack of mental toughness and competitiveness. Drives him bonkers. It should.

My take: This guy is a good coach. I am excited to see where he takes this program.

Buckle up, gang. As Beilein says, "if your heart turns to peanut butter, you're not going to make it." … #B1G

My take: Whose heart will melt tonight in the Michigan at Minnesota game?

On question about leadership, Izzo says he might make Appling a captain

My take: I think this would be a grand idea. Give Keith Appling some ownership of the team. He?s the squad?s key player, and it may make him a better player.

Hollins said the Assembly Hall crowd "got to me a little bit" in the first half at Indiana. He hopes the Barn can do the same to Trey Burke.

My take: This is gonna be good tonight, people.