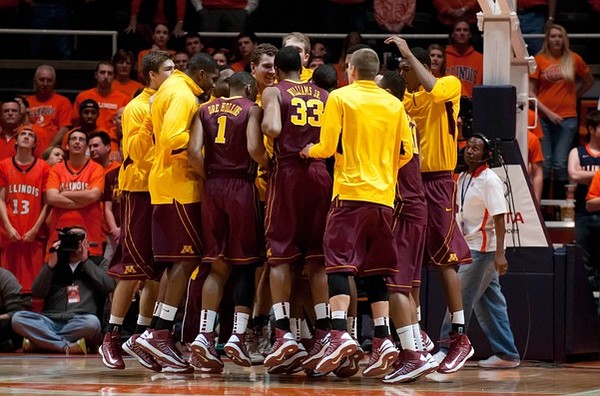 Heading into Wednesday night's game at No. 13 Illinois, No. 10 Minnesota still had its doubters. This was, for the most part, the same team that missed the NCAA tournament last season. So, it was only normal that it would have naysayers despite a 14-1 record, the lone loss coming to No. 1 Duke abroad.

After the 84-67 road beatdown over a talented Illini team, well, the Gophers have their believers. And they should. Check out some of the Twitter praise for the Gophers in this post.

[ RELATED: Watch all the highlights from Minnesota's win at Illinois ]

I never once thought Gopher hoops was in trouble tonight. To say that of a game AT Illinois is impressive. This team is legit.

Not sure people have taken Minnesota seriously; they should; Saturday at Indiana is their golden opportunity. #dechr

If this Minnesota-Illinois result holds it should put to rest any thoughts the Gophers were an early-season fluke. Shelf-life staying power.

If it comes down to overall team toughness, Gophers might win the Big10. Mbakwe sets that tone as well as anyone in college right now.

Takeaway from tonight: Even at home, Indiana is going to have its hands full with Minnesota. Gophers are very good.

Shout out to Minnesota Gophers Men's Basketball…keep doing your thing!! Congrats on the W tonight!

Gophers. #Legit … They play at No. 5 Indiana next. A win there and they've got EVERYONE'S attention.

Minnesota is a really tough team to prepare for. Gophers have several guys who can be the assassin. Tubby Smith's deepest team ever.

Good to be a Gopher right now. Football made a bowl, hockey is ranked No. 1, hoops is top 10.

#Gophers fans, we've been through so much through the years. I can say with great confidence that we deserve a season like this. #Ski-U-Mah

That's a lot of praise, and from some highly respected personalities.

It's deserved, though. Few teams can match Minnesota's combination of strength, size, athleticism and depth. No, the Gophers may not be the best outside shooting team, but they get easy looks and rebound their misses better than any other team in the nation.

Simply put, Minnesota is for real. And its next test is another big one, as it visits No. 5 Indiana on Saturday on BTN/BTN2Go.

Something to keep in mind: Minnesota was the only team to go into Indiana and hand the Hoosiers a loss last season. It should be fun.