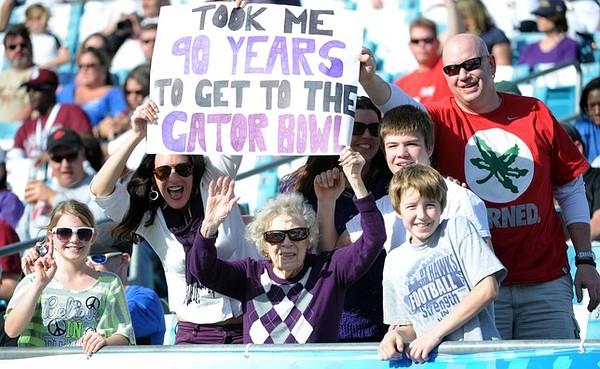 With the 2012 bowl season in the books, let?s take a look back at the best of the postseason for the Big Ten. The bowls didn?t go like the conference and the members had hoped, as the Big Ten posted a 2-5 mark with a 1-4 record on New Year?s Day. From the best game to the best defensive stop, here?s a look at my Big Ten Bowl Honor Roll.

Best game: Let?s go with the Outback Bowl, where Michigan lost a wild one to South Carolina, 33-28. The Gamecocks scored the game-winning touchdown in the final 11 seconds on a 32-yard touchdown pass that left fans clenching their chests.

Best offensive effort: Honestly, there weren?t too many. Minnesota turned some head by notching 368 yards in a 34-31 loss to Texas Tech in the Meineke Car Care Bowl of Texas with most of the damage being done on the ground with 222 yards rushing. But let?s go with Nebraska, which had 443 yards and 31 points in a 45-31 loss to Georgia in the Capital One Bowl. It was an impressive display of balance, as the Cornhuskers had 204 yards passing and 239 yards rushing.

Best kick: Michigan State?s Dan Conroy calmly trotted onto the field and nailed a 47-yard field goal with 1:01 left to push the Spartans to a 17-16 victory over TCU in the Buffalo Wild Wings Bowl. Moments earlier, the Horned Frogs had taken the lead on a 53-yard field goal.

Best rushing effort: As he had been all season, Michigan State?s Le?Veon Bell was a workhorse in the Buffalo Wild Wings Bowl. He carried 32 times for 145 yards and a touchdown, literally and figuratively carrying the Spartans to victory despite having as many completions as punts (11). Oh, and Bell also tossed a 29-yard pass. Also have to mention Nebraska running back Rex Burkhead, who went out with a bang, running 24 times for 140 yards and a touchdown vs. Georgia in the Capital One Bowl. And Michigan?s Denard Robinson ran for 100 yards in the Outback Bowl to become the all-time leading rusher among quarterbacks in FBS history (4,495), passing West Virginia?s Pat White.

Best passing effort: Michigan?s Devin Gardner looked good in completing 18-of-36 passes for 214 yards with three touchdowns and a pick in the Outback Bowl. He had some consistency issues but continues to develop and has a bright 2013 ahead. Also need to mention Purdue?s Robert Marve. Falling behind Oklahoma State, 45-0, in the Heart of Dallas Bowl, Purdue had to throw a lot. Marve completed 21-of-34 passes for 212 yards with two touchdowns and two interceptions in a 58-14 loss.

Best receiving effort: Loved what Jeremy Gallon did for Michigan in the Outback Bowl, catching nine passes for 145 yards and two touchdowns. The diminutive junior was a sparkplug and is set up for a big 2013.

Best defensive effort: How about Northwestern end Tyler Scott? He notched two sacks of Mississippi State quarterback Tyler Russell, who tossed four picks. Fellow Wildcat end Quentin Williams picked off one of those passes in the NU victory in the Gator Bowl.

Best hit: South Carolina defensive end Jadeveon Clowney?s destruction of Michigan running back Vincent Smith helped push momentum to the Gamecocks. The hit-which made Smith?s helmet pop off and also caused a fumble that Clowney recovered–set the stage for a crazy final quarter in Tampa that saw three lead changes.

Best response to adversity: Northwestern. The Wildcats raced to a 13-3 second quarter lead over Mississippi State in the Gator Bowl only to see the Bulldogs rally to tie the score in the third quarter. But Northwestern responded with a 76-yard drive that resulted in a three-yard scoring run by Tyris Jones for a 20-13 edge en route to a 34-20 victory to end a nine-game bowl losing skid which was tied for the second longest of all-time.

Best comeback: Michigan State fell behind TCU, 13-0, in the first half of the Buffalo Wild Wings Bowl. But the Spartans rallied for 17 second-half points to take a 17-16 triumph despite having just 227 yards of offense for the game.

Best stuff: Trailing Stanford 14-0 and facing fourth-and-1 at the one-yard line early in the second quarter of the Rose Bowl, Wisconsin running back James White was stuffed for no gain after taking a direct snap. It proved to be a killer stop for the Badgers in a 20-14 loss to the Cardinal in the Rose Bowl, ruining Barry Alvarez?s return to the sideline.