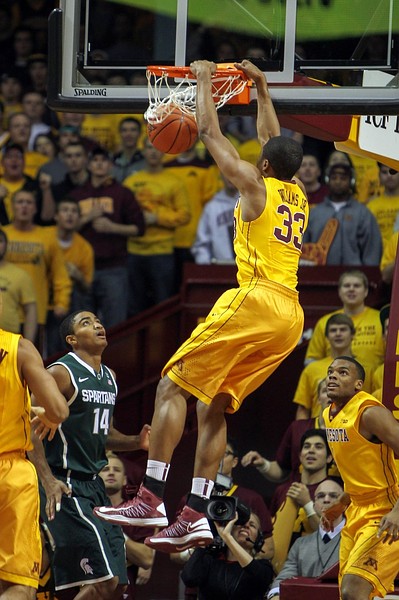 This LostLettermen.com post got me thinking about the Big Ten's top dunkers. There's a bunch of them, and they've kept me busy this season on our Big Ten Dunk Archive. But who are the best of the best? I've come up with my top 5, plus honorable mention list, in this post. Let's hear from you, too, though. There's a poll included inside and feel free to send your nomination in the comment box.

1. Rodney Williams, Minnesota – In the open court, on alley-oops or with putback slams, Williams is the Big Ten's most exciting and diverse dunker. Any time he's near the rim, he almost makes you hold your breath.

2. Sam Thompson, Ohio State – With the dunks Thompson's given us in his first year and a half as a Buckeye, experience is the only think keeping this nightly highlight-reel from the top of the list.

No one's better than Thompson off the inbound pass:

But he's pretty good in the open court, too:

3. Victor Oladipo, Indiana – From the standpoint of creating dunks off the dribble and challenging defenders, the fleet-footed and quick-leaping Oladipo is as good as it gets in the Big Ten.

Example No. 1, last year against No. 1 Kentucky:

4. Branden Dawson, Michigan State – Dawson brings size and athleticism to the rim every time he pokes, and it's a beautiful thing to watch. Had it not been for last year's knee injury, he'd have more highlights.

And taking it to the rim…

5. Joseph Bertrand, Illinois – Bertrand doesn't have nearly as think of a catalog as the guys ahead of him on this list. Still,  he's one of the Big Ten's most underrated athletes and high-flyers.

How about this putback?

Or this reverse alley-oop?

Now that you've seen my candidates, let's hear your No. 1.