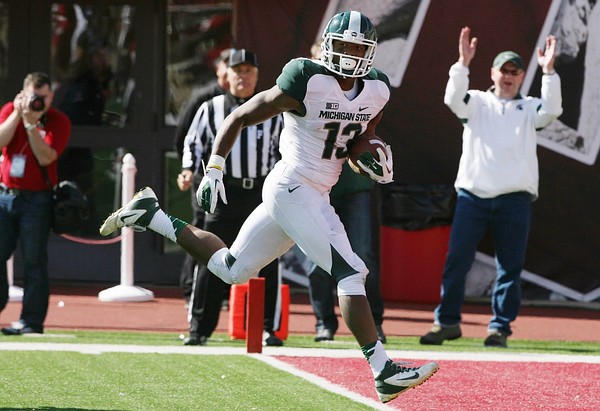 Expect a tough, low-scoring defensive effort in this game. Neither team comes in on a roll, having lost four of their last six games. Needless to say, the season hasn?t gone as expected for either team as both opened the season in the Top 25. In fact, the Spartans were picked by some to win the Big Ten coming off consecutive 11-win seasons.

But Michigan State had to win its last game of the season just to get bowl eligible. TCU has had to deal with a young team-70 percent of the players were freshmen or sophomores–and lost its quarterback and top running back.

Player on the spot: Le?Veon Bell. It?s this simple-the Michigan State running back needs to have a big game if the Spartans want any chance of winning. The junior is the Big Ten?s top rusher, averaging 137.3 yards per game with 1,648 yards. This could be Bell?s last games, as he may opt to turn pro. Stay tuned.

Top individual matchup: Michigan State receivers vs. TCU secondary. Spartan wideouts Aaron Burbridge, Tony Lippett and others need to get open vs. a good collection of Horned Frog defensive backs. TCU ranks No. 4 in the Big 12 pass defense (228.1 ypg). If Michigan State can?t pass, there figures to be little room to run-and little chance for success vs. a TCU defense that is No. 18 in the nation. Spartans quarterback Andrew Maxwell has struggled with consistency, completing a Big Ten-low 52.9 percent of his passes with 13 touchdowns and nine interceptions.

Top unit matchup: Michigan State offensive line vs. TCU defensive line. The Spartan front has been inconsistent most of the season. Injuries have been an issue. And the unit will face a tough TCU front that is part of a Horned Frog defense that ranks No. 1 in the Big 12 in total defense (332.0 ypg). TCU also is No. 1 in the Big 12 vs. the run (103.9 ypg).
Fast fact: Michigan State?s five rushing touchdowns allowed tied for the second-fewest in the nation behind Notre Dame's two.

1. TCU may struggle to score. This is a pedestrian offense that misses quarterback Casey Pachall, who left the team earlier in the season to deal with drug/alcohol issues. Freshman Trevone Boykin has been inconsistent while learning on the job. And the Frogs have had to make do without top back Waymon James, who was lost earlier this year to a knee injury. TCU averages a Big 12-low 3.9 yards per tote.

2. Defense. Few schools play it better than Michigan State, which ranks No. 4 nationally in total defense (273.3 ypg). And MSU is No. 8 in the nation vs. the run (99.6 ypg). A TCU attack that lacks much explosive punch may have issues trying to score vs. a Spartan defense that yielded 20 or less points eight times.

3. Bell. He?s a big, tough, physical back who can move the pile. If the Horned Frogs have to deal with Bell-and get worn down by him-it could open up the passing game for Michigan State. Bell ran more times (350) than any back in the nation.

1. Defense. Michigan State may be meeting its peer when it comes to defense. Gary Patterson?s unit always ranks among the nation?s best for a program that?s making its eighth bowl appearance in a row. TCU freshman end Devonte Fields is a beast off the edge.

2. Can MSU get over the edge? The Spartans have had issues when it comes to winning close game, losing five Big Ten games by a combined 13 points. How bad was it? Michigan State failed to win a Big Ten home game. But, it?s worth noting: TCU also failed to win a home Big 12 game.

3. What is this team?s mind-set? As mentioned, the Spartans were pegged by some to win the Big Ten. But they struggled to just qualify for a sixth bowl in a row. Is Michigan State motivated to play another game after coming off two bigger seasons and more prestigious bowls?