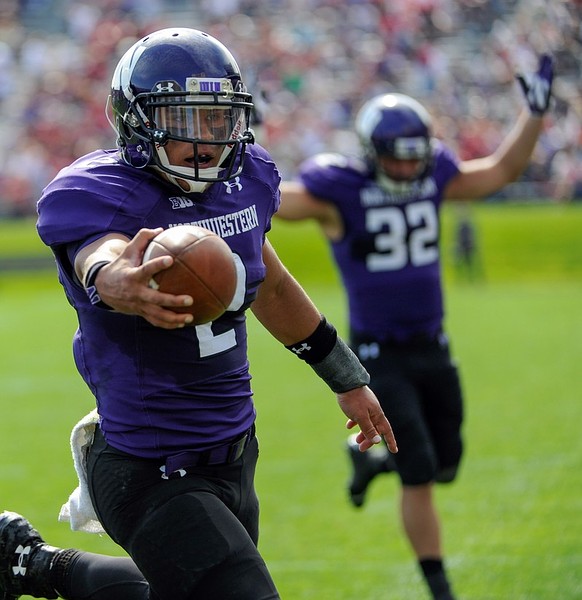 The bowl season kicked off last weekend with two games (full schedule here). Well, 33 more remain! And the Big Ten will be involved in seven of them. That?s a good place to start with my daily links. Most aren?t predicting much postseason success for the Big Ten, especially when it comes to the three bowl games vs. teams from the mighty SEC.

The Capital One Bowl (Nebraska vs. Georgia); Outback Bowl (Michigan vs. South Carolina); and Gator Bowl (Northwestern vs. Mississippi State) all will be difficult battles for the Big Ten facing teams from a league that has won the last six national titles and generally is considered kingpin of college grid.

How bad has the Big Ten?s bowl fortunes been vs. the mighty SEC recently? Rich Kaipust of the Omaha World-Herald notes that the SEC is 5-1 against the Big Ten over the last two bowl seasons, and 6-1 if you include current member Texas A&M beating Northwestern last December in its final game as a Big 12 program. Its only loss was Georgia falling 33-30 in triple overtime to Michigan State in the Outback Bowl a year ago.

Here's the full bowl schedule for the Big Ten:

Michigan coach Brady Hoke has heard all about the SEC?s dominance over the Big Ten. And-in typical Hoke fashion–he shrugs it all off, telling MLive.com: ?People make a lot more about that, more than I would.?

Well, it?s difficult to ignore the SEC?s 9-5 mark vs. Big Ten teams over the past four postseasons. Still, I love Hoke?s indifference. But, more than anything, Wolverines fans know a win against South Carolina would help validate, at least somewhat, an otherwise disappointing season for 8-4 Michigan and build momentum heading into the offseason, notes Kyle Meinke. And, he?s correct.

Nebraska athletic director Tom Osborne is a wise man. So, when he says society?s increasing vitriol impacts coaches, you believe him. I know I do. And that increasing vitriol makes it more difficult for coaches to keep their jobs, says Steve Sipple of the Lincoln Journal Star.

?I think across the nation, there is less patience than there used to be," Osborne said. "Maybe it has to do with salaries to some degree.

"There's probably more anger out there. That's fanned a little bit by the social media and constant chatter on the Internet.

"It seems if anybody hears a rumor or is angry about something they can put it out there, and people read it. And I think we're kind of conditioned, from the time we're in grade school, that if we see something in print, it must be accurate.

So, if you are scoring at home-and I know they are on State Street in Madison–that?s six assistants who are bolting Wisconsin after the Rose Bowl.

Speaking of Wisconsin, redshirt freshman quarterback Joel Stave says he?s on pace to play in the Rose Bowl after breaking a collarbone in a loss to Michigan State on Oct. 27. And that is awesome! Tom Mulhern of the Wisconsin State Journal notes Stave would provide more of a throwing element - and it certainly doesn't hurt the Badgers to plant that seed for Stanford to consider. But, others are cautious on Stave?s return.

"We're seeing where Joel's at," offensive coordinator and quarterbacks coach Matt Canada said. "Joel's not cleared. He's getting some reps here and there.

"We've got to make sure everything heals up but if Joel's healthy, Joel played very, very well. You talk about the future for this place, what he was able to do as a freshman was awesome."

It?s difficult not to be impressed with Illinois? start. Loren Tate of the Champaign News-Gazette is. But things will get much more difficult from here on out for the Fighting Illini under first-year coach John Groce. The game against Missouri in St. Louis this Saturday will tell us a lot.

Listen up, Iowa fans. Mike Hlas of the Cedar Rapids Gazette has something to say: Going with an unproven quarterback isn?t the concern it once was.

And that?s good news for the Hawkeyes, since Iowa is going to break in a new signal-caller in 2013, be it a freshman or a junior college transfer. Iowa fans aren?t used to seeing freshman quarterbacks, but if it is one (C.J. Beathard is a candidate), there is all sorts of recent precedent for rookies who have done well at the position, notes Hlas. In fact, there are many notable freshmen who shined his year. Texas A&M?s Johnny Manziel and Oregon?s Marcus Mariota are two. Stay tuned. This is gonna be a fun battle to watch unfold in Iowa City.

This shouldn?t be a shock to hear: Tubby Smith and Jerry Kill were the top-paid staffers at Minnesota in fiscal 2012.

Michigan State fans are on pins and needles, waiting for super-recruit Jabari Parker to announce his decision. He?ll do so at 4 p.m. CT on Thursday from his school: Chicago Simeon. Many think Parker?s decision will come down between the Spartans and Duke. But Florida, BYU and Stanford also are in contention. However it turns out for MSU, coach Tom Izzo has no regrets on how he has handled the recruitment of Parker.

It?s no secret: Purdue is struggling. One solution may be a smaller lineup. Hey, it can?t hurt. With losses to Bucknell, Eastern Michigan, Oregon State-among others–this season is circling the drain for the 4-6 Boilermakers, and it?s not even January.

The Big Ten schedule is obviously set to change, but in 2016 Nebraska will play in Chicago back-to-back weeks. That's bizarre.

My take: This is because of a game at Soldier Field vs. Northern Illinois and a game at Northwestern. It is weird. But, it?s better than going to Starkville, Miss., on consecutive weekends.

My take: And we may be getting closure on Wisconsin, soon.

McCaffery calls the first seven B1G games a daunting task. Will his team survive that stretch? 'That will define us."

My take: This will be a fun test for an Iowa program that appears to be ascending.