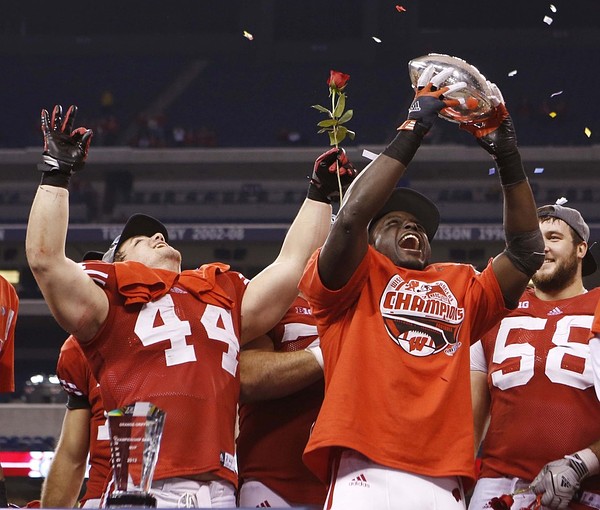 INDIANAPOLIS – Could this bizarre 2012 Big Ten season had ended any differently than this?

Of course not. Wisconsin?s 70-31 pummeling of Nebraska put a fitting punctuation mark on a season that didn?t go by script. In fact, it went way off script. The Big Ten?s best team-12-0 Ohio State-couldn?t play in the Big Ten title game or go to a bowl because of probation. But it was given a trophy for winning the Leaders Division.

Penn State overcame long odds playing with a depleted roster and battling through an 0-2 start to finish 8-4 and in second place in the Leaders Division. But, like Ohio State, probation ended the Nittany Lions year at the end of the regular season.

Michigan State was picked by some to win the Big Ten, but the Spartans went 6-6 to be arguably the league?s biggest disappointment after notching back-to-back 11-win seasons.

Michigan also was a trendy Big Ten pick and was the league?s highest ranked team in the preseason AP poll, but an inconsistent offense left the Wolverines short of expectations.

Add it up, and five Big Ten teams have better records than Wisconsin: 12-0, Ohio State, 8-4 Penn State, 8-4 Michigan, 9-3 Northwestern and 10-3 Nebraska.
But the last team standing is Wisconsin, which entered tonight?s game with a 7-5 overall record and 4-4 Big Ten mark-losers of two in a row and three of their last four games. Didn?t matter.

So, that means the third-best team in the Leaders Division-and sixth-best in the Big Ten–will go to the Rose Bowl, marking the first time a team ever has gone to the ?Granddaddy Of Them All? with five losses.

[RELATED: Line up, naysayers: Badgers off to Rose Bowl]

?To have three Big Ten championships says it all,? said Badger coach Bret Bielema. ?This one means a lot.?

The win earned Wisconsin its third Rose Bowl in a row. The last Big Ten team to do that was Michigan from 1976-78. The Badgers will face Stanford, as Bielema will look for his first Rose Bowl triumph after losing to TCU after the 2010 season and to Oregon after last year. In fact, a Rose Bowl triumph is about the only thing missing from Bielema?s sparkling resume. The last time the Badgers won the Rose Bowl was after the 1999 season against ? Stanford.

The Badgers came out scoring, jumping to a 14-0 lead after a Melvin Gordon 56-yard run and ?pick six? by Marcus Cromartie. For all intents and purposes, the game was over at halftime after Wisconsin had built a 42-10 lead with 391 yards (290 on the ground). The Badgers finished with 640 yards, as 539 came on the ground. Wisconsin averaged 10.8 yards per carry.

A big key entering the game was Wisconsin quarterback Curt Phillips. Could the fifth-year senior making just his fourth career start pass well enough to keep a Nebraska defense that surely would be stacked to stop the run honest? Turns out, Phillips would only need to throw eight passes, as Wisconsin's rushing game was devastatingly effective.

Gordon, Montee Ball and James White ran wild all night. Ball finished with 216 yards; Gordon had 202; White had 109. It was the first time in school history that the Badgers produced two, 200-yard rushers. And Ball scored three touchdowns to push his NCAA career record to 82 with a game to go. It was a nice continuation of what is turning into a spectacular senior season for Ball, who eschewed a chance to turn pro to return to Wisconsin.

?It spoke volumes to those around him,? said Bielema. ?They wanted to see Montee have success. We all know he?s a good player, but he?s also an incredible human being.?

This is a crushing loss for a Nebraska team that was looking for its first conference title since 1999. It also is Pelini?s third loss in a league title game, as he also dropped the Big 12 championship game twice.

So, instead of going to the Rose Bowl for the first time since the 1940 season, the Cornhuskers appear headed to the Capital One Bowl to maybe play Texas A&M.

Wisconsin did get it done. But it feels like it has more to do.

?We all have something to prove,? said Ball. ?We have unfinished business.?