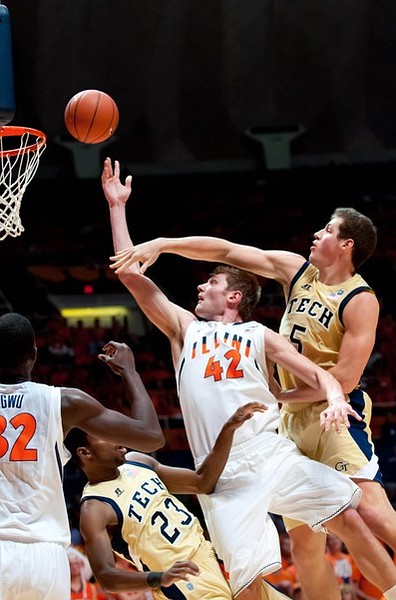 Six more Big Ten men's basketball teams played in the second night of the ACC-Big Ten Challenge. While the two conferences finished the two-day event tied with six wins apiece, the Big Ten keeps the Commissioners Cup. The Big Ten won last year's event 8-4, and with a tie the Cup stays with the conference that won the previous year.

After taking the first night of the Challenge four games to two, the second night featured a few close games and some impressive plays, including this swooping layup from Illinois' Joseph Bertrand. Find links to all of the results in this post and see our video player for all of the highlights.

Here are the full results with links to recap posts with available photos and videos.

On the women's side of this conference challenge, eight teams played Wedneday. See available video and photos here as well as any available video highlights. Four more teams play Thursday night to complete the event. Duke beat Michigan 71-54 as Chelsea Gray and Elizabeth Williams scored 19 points each for the Blue Devils. Also, Purdue topped 85-73 as K Houser scored 19 points, hitting all 10 of her free-throw attempts, and added 10 assists.