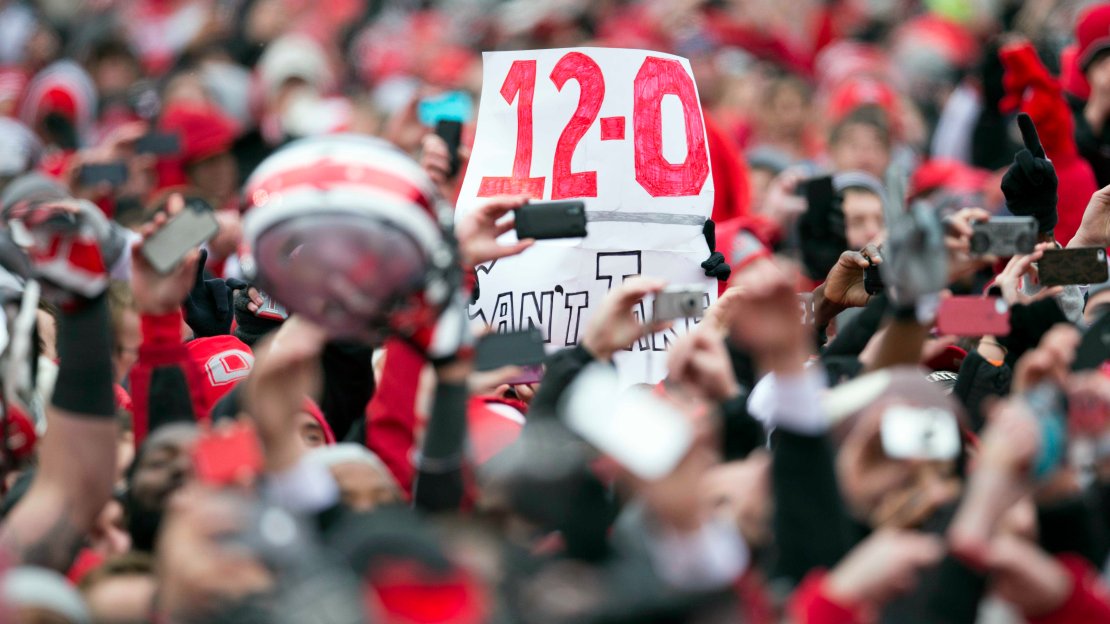 Carlos Hyde ran for 146 yards and No. 4 Ohio State's defense shut out 20th-ranked Michigan in the second half to grab a bruising 26-21 victory on Saturday, completing an improbable 12-0 season for the Buckeyes. It was a sweet win for the Buckeyes, just 6-7 last season with a loss to their archrivals in a transitional year in which they were facing heavy NCAA penalties.

After Urban Meyer took the job as head coach a year ago, they were socked with a bowl ban after this season – and still ran the table.

Ohio State (12-0, 8-0 Big Ten) is ineligible for a BCS national title but still has an outside shot at finishing No. 1 in the final Associated Press Top 25 if other contenders lose. Michigan (8-4, 6-2) will now await a minor bowl bid.

Drew Basil matched his season output with four field goals and the defense did the rest, forcing three turnovers in the second half.

It was played before 105,899, the largest crowd ever to witness "The Game" in Columbus.

FINAL: Ohio State and No. 19 Michigan tangled in a back and forth affair that ended with a 26-21 victory for the Buckeyes on Saturday at Ohio Stadium. Denard Robinson did his best to carry the Wolverines' offense, turning 10 carries into 122 rushing yards and one touchdown.

Braxton Miller threw for 189 yards while going 14-18 for Ohio State. He threw one touchdown and no interceptions. Miller also ran for 57 yards on 20 attempts. Miller had a trusted receiver in Corey Brown. He caught eight passes for 95 yards and one touchdown.

The Buckeyes' offense finished the game having gained 396 yards. Along with Miller's stats in the passing game, Ohio State also added 207 yards rushing on 52 attempts.

Michigan's Devin Gardner went 11 of 20 through the air for a total of 171 yards. Gardner finished the game with one touchdown and one interception. Gardner had a trusted receiver in Jeremy Gallon. He hauled in six catches for 67 yards.

The Wolverines racked up 279 total yards. In addition to Gardner's efforts through the air, Michigan also rushed 27 times for 108 yards.

Drew Basil's 28-yard field goal gave Ohio State the lead, 23-21, and was the final play of a seven-play, 35-yard drive. Michigan's failure to convert on a fourth-and-3 set the Buckeyes up at the Wolverines' 46-yard line to start the drive. Ohio State ran the ball on all six snaps during that march downfield.

The Buckeyes' Carlos Hyde rushed for 28 yards in the quarter to put him over 100 yards for the game. Hyde has 111 total yards on the ground so far today.

Ohio State has possession at Michigan's 30-yard line to start the fourth quarter.

SECOND QUARTER: Michigan racked up 81 rushing yards in the second, and the Wolverines have taken the lead 21-20. Devin Gardner's one-yard touchdown run put Michigan on top 14-10, polishing off a four-play, 25-yard drive. A fumble recovery by the Wolverines set Michigan up to start the drive.

The Buckeyes closed the gap to 21-20 in the final seconds of the first half, when Drew Basil made a 52-yard field goal to polish off a 30-yard drive.

Michigan's Robinson reached the 100-yard rushing mark for the game thanks to 90 in the quarter, and currently sits with 124 yards in all.

The Wolverines will get the ball to start the second half.

FIRST QUARTER: Roy Roundtree caught two passes for 87 yards and one touchdown, but No. 19 Michigan trails Ohio State 10-7 at the end of the first quarter. Ohio State's passing attack looked sharp, as the Buckeyes threw for 129 yards in the quarter.

Ohio State struck first when Carlos Hyde turned a handoff into a three-yard touchdown, the final play of a six-play, 75-yard drive. The Buckeyes used Braxton Miller's 52-yard pass to Devin Smith to fuel the drive.

Michigan tied the game at seven after Devin Gardner tossed a 75-yard touchdown to Roundtree to end a three-play, 83-yard drive.

The Wolverines will start the second quarter with the ball on their own 42-yard line.