Penn State puts No. 42 on helmet to honor Mauti 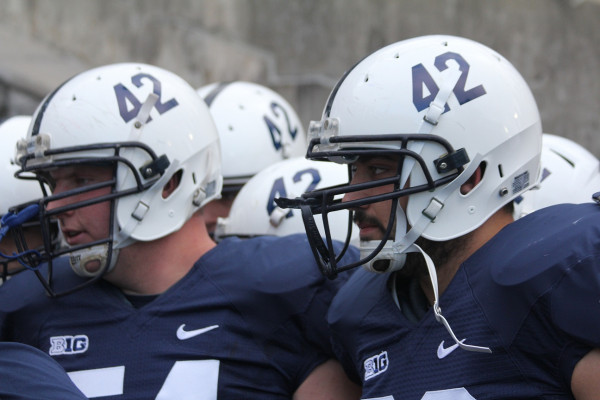 There's no doubt who Penn State's leader is. And we'll see proof of it in Saturday afternoon's season finale against Wisconsin at Beaver Stadium. The Nittany Lions are wearing No. 42 on the left side of their helmets in honor of injured senior Michael Mauti.

Mauti hurt his left knee in last week's win over Indiana. The senior overcame two season-ending knee injuries earlier in his career and turned himself into one of the Big Ten's top defensive player of the year candidates this year.

The linebacker, who helped keep Penn State together following the offseason child sex scandal, will miss Saturday's game, which happens to be Senior Day.

Penn State found another way to honor Mauti, too:

PIC: Gerald Hodges lined up in the #42 jersey during the first half… http://t.co/DdBvj7cW #OneTeam

Here's the play where Mauti got hurt:

And being the leader he is, he received quite the ovation as he was carted off the field: