How did we do? Week 12 Big Ten picks revisited 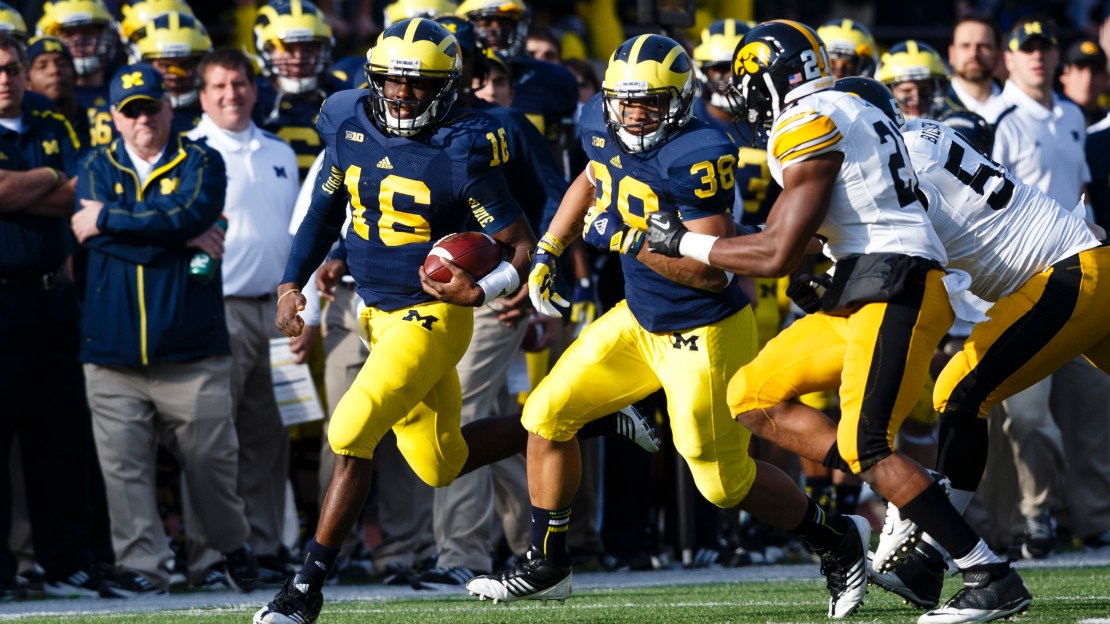 Before we turn our attention to Week 13, it's time to review how BTN.com fans, Tom Dienhart and yours truly did with our Week 12 predictions. It was a perfect showing for BTN.com fans, which means they jump Dienhart and move into sole possession of first place.

Dienhart and I both went 5-1, as we incorrectly picked Michigan State to beat Northwestern.

Michigan 42, Iowa 17
Tom's pick: Michigan, 35-13 – Devin Gardner? Denard Robinson? It won?t matter who is under center vs. a slumping Hawkeye team whose season is circling the drain. Even if the Iowa defense shows up, the offense doesn?t figure to be able to score enough.
Brent's pick: Michigan, 41-10 – It doesn't matter who's starting under center for the Wolverines, because points will come easy against an Iowa team that is struggling to move the ball and surrendering an average of 29.3 points the last four times out.

Northwestern 23, Michigan State 20
Tom's pick: – The Wildcats won?t blow a double-digit lead this time. In fact, they may not lead at any point in this game. The Spartans will be prepared coming off a bye-and motivated to become bowl eligible. Time to show some pride.
Brent's pick: – Coming off a bye week, Michigan State workhorse back Le'Veon Bell will be as fresh as he's been since the season opener, and we all know what he did to Boise State.

Purdue 20, Illinois 17
Tom's pick: Purdue, 27-14 – The Boilermakers will take another step toward bowl eligibility behind a suddenly hot offense led by Robert Marve. The Illini offense may find some life-but not enough vs. a Purdue defense that is starting to play up to its talent-finally. Who?s gonna block Kawann Short? Exactly.
Brent's pick: Purdue, 31-21 – Remember when Illinois and Purdue entered the season as popular picks for teams that could surprise? I do. Heck, I was one of them who believed it. Three months later, it's almost impossible to pick Illinois in any game.

Nebraska 38, Minnesota 14
Tom's pick: Nebraska, 41-14 – The Cornhuskers will hold serve in the Legends Division by dismantling an overmatched Gophers team that isn?t ready to stand toe-to-toe with a team like Nebraska. The Blackshirts will smother freshman quarterback Philip Nelson. Meanwhile, Taylor Martinez will flourish.
Brent's pick: Nebraska, 38-10 – Taylor Martinez won't need to worry about engineering a second-half rally in this one. No, Nebraska will jump ahead early and lead wire-to-wire en route to recording its easiest win since trouncing Idaho State, 73-7, in the final week of nonconference play.

Ohio State 21, Wisconsin 14 (OT)
Tom's pick: Ohio State, 29-24 – The Buckeyes? march to perfection continues with a big win in Madison. Too much Braxton Miller and too much Carlos Hyde. Badger quarterback Curt Phillips will struggle to pass, while the Wisconsin o-line won?t be able to handle the Buckeye defensive front.
Brent's pick: Ohio State, 27-21 – Wisconsin's underrated defense vs. Braxton Miller is one of the better headlines of Week 12. Regardless of whether the Badgers can keep Miller from a big day, their offense is too one-dimensional to beat a team the caliber of Ohio State.