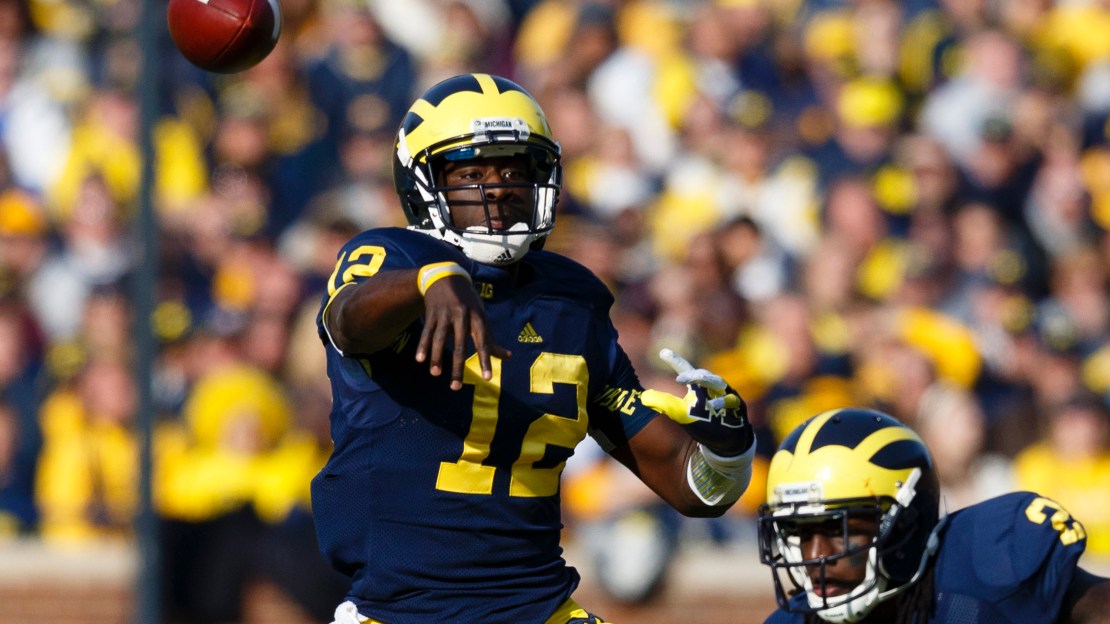 Every Saturday during the Big Ten football season, BTN.com senior writer Tom Dienhart watches all the action and offers his immediate thoughts from every game. Read Dienhart's Snap Reactions to Michigan, Penn State and Northwestern's wins over Iowa, Indiana and Michigan State, respectively, in this post.

Michigan 42, Iowa 17
1. Devin Gardner continues to excel since taking over at quarterback the last three games. Without a doubt, the Michigan offense is better with Gardner under center. Today, he hit 18-of-23 passes for 314 yards with three touchdowns and a pick. He also ran for 37 yards and three scores. Seeing Gardner run this offense, you can?t help but wonder if Michigan would have won at Nebraska had he been ready to take over instead of Russell Bellomy.

2. Even though he couldn?t play quarterback all game, Denard Robinson still played a big role in the win. The Michigan staff used Robinson in a number of ways, at running back and receiver in addition to quarterback. It was a fun way for him to go out in his final game in the Big House. Robinson ran for a team-high 98 yards and caught two passes for 24 yards.

3. Another Saturday, more misery for Iowa. That?s five losses in a row for the Hawkeyes. And this loss was No. 7, officially eliminating Iowa from going to a bowl for the first time since 2007. The Hawkeyes had 309 yards and allowed 513.

Penn State 45, Indiana 22
1. The Nittany Lions are primed to finish this season with a bang, notching win No. 7 today. Who envisioned that after an 0-2 start? Penn State looked good in rebounding from a tough loss at Nebraska to top Indiana, notching 544 yards. Up next is a visit from Wisconsin. Win that, and Bill O?Brien may be the national coach of the year.

2. Allen Robinson is good. Really good. The sophomore sensation was off the radar before the season started. But he has emerged as the Big Ten?s top receiver-and one of the best in the nation. Robinson caught 10 passes for 197 yards and three touchdowns vs. the Hoosiers.

3. Indiana will have to wait until next year to get to a bowl. The Hoosiers have made nice strides in their second season under Kevin Wilson. But the defense remains, ahem, a work in progress. The offense, however, played well again in racking up 474 yards.

Northwestern 23, Michigan State 20
1. The Wildcats enhanced their bowl prospects with this win, as they may be the favorite to go to the Gator Bowl. Northwestern showed moxie in hanging onto a second-half lead after blowing them at Penn State, vs. Nebraska and at Michigan.

2. The Wildcats were opportunistic today, which helped. Michigan State had 419 yards, while Northwestern tallied just 303. But the Wildcats generated four turnovers to help push them to victory.

3. It just may not be meant to be this season for Michigan State, apparently. The Spartans? five Big Ten losses have come by an aggregate 13 points. Its two league wins have come by a combined seven points. And this was a team many felt would win the Legends Division. Now, MSU needs to win at Minnesota next week to become bowl eligible.