Did You See This? Penn State fans cheer Mauti 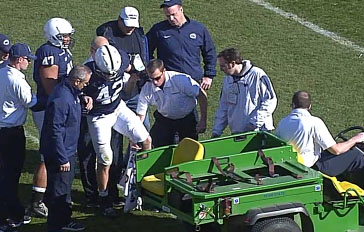 This is not the way Penn State's Michael Mauti wanted to leave Beaver Stadium, perhaps, for the final time in his career. Already having suffered a pair of knee surgeries, Mauti left Saturday's game on a cart after injuring his left knee. Mauti is a fan favorite, both for his incredible play and leadership, so it's no surprise the Penn State faithful gave him a standing ovation and chanted his name as he left the field. Watch the ovation now and see the injury in this post.

BTN sideline reporter J Leman said there is no update on Mauti and that he hopes to get one at halftime. It didn't look good, though, as Mauti, who's well-versed on knee injuries, had his head in his hands on the cart.

Hate seeing Michael Mauti carted off. One of the most impressive players I ever have met in my career. #PennState #B1G

Michael Zordich comforts Michael Mauti as he leaves the field on a cart. http://t.co/ceJGIkq6

At the same time Mauti went down, Michigan's Fitzgerald Toussaint also was being carted off the field: