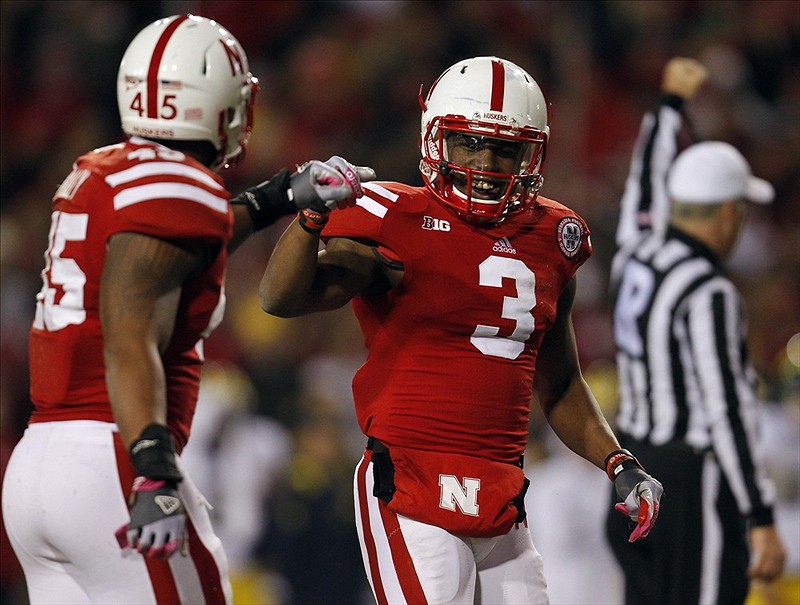 Coaches always say: You play the games to remember in November. Well, my calendar says ?November.? While this Saturday may lack some pizzazz on the surface, there still are several contests that will go a long way toward shaping the Legends and Leaders division races.

1. Nebraska at Michigan State | Full scoreboard & TV info
Why you should watch: With consecutive wins over Northwestern and Michigan, the Cornhuskers are in control of the Legends Division in the program?s quest for its first conference title of any sort since 1999. The Spartans? season of ups and downs took a turn up last week with a 16-13 overtime win at Wisconsin. MSU has faint division title hopes as it aims to just get bowl eligible at this point.

Player on the spot: Michigan State RB Le?Veon Bell. He has seen his production wane the last two weeks, running for 68 yards at Michigan and 77 at Wisconsin. In fact, Bell has rushed for over 100 yards just twice in the last five games. He needs a big game to keep a surging Cornhusker defense off balance and open room for a pedestrian Spartan passing game.

Key matchup: Nebraska quarterback Taylor Martinez vs. Michigan State linebackers. Martinez paces the Big Ten in passing efficiency, throwing a Big Ten-high 16 touchdown passes while notching 1,781 yards passing. Martinez also ranks 12th in the Big Ten in rushing, averaging 57.6 yards per game. He hit 7-of-13 passes for 80 yards with a touchdown and interception and ran 12 times for 23 yards last year vs. MSU. Spartan linebackers Max Bullough, Denicos Allen and Taiwan Jones need to contain Martinez in the run game while getting after him as pass rushers when they aren?t dropping into coverage.

2. Michigan at Minnesota | Full scoreboard & TV info
Why you should watch: It?s the battle for the Little Brown Jug, a trophy that the Golden Gophers have won just twice (1986 and 2005) in the last 30 years. Minnesota needs one more victory to attain bowl eligibility for the first time since 2009. The Wolverines can?t afford another misstep if they want to stay in the Legends Division hunt after losing at Nebraska last week.

Player on the spot: Michigan quarterback Denard Robinson. How healthy is that right elbow that got dinged last Saturday night in a 23-9 loss at Nebraska? Robinson left the game in the second quarter and never returned. And the Wolverines? offense sunk into a deepening abyss that has seen Michigan fail to score a touchdown in the last two games. Robinson must show he can pass the ball at Minnesota, as the offense is getting too predictable.

Key matchup: Minnesota QB Philip Nelson vs. Michigan defense. The true freshman signal-caller has captured the imagination of the Gopher Nation with his effort last week in a 44-28 win vs. Purdue. Nelson hit 15-of-22 passes for 246 yards and three touchdowns in just his second start. But he will face his sternest test yet vs. a Wolverine defense that is No. 2 in the Big Ten (291.0 ypg).

Key number: 12, average points per game that Michigan is allowing in its last six contests. The Wolverines also are No. 1 in the nation in pass defense (145.2 ypg).

Key note: Michigan hasn?t scored a touchdown since the fourth quarter vs. Illinois on Oct. 13. Two games (Michigan State and Nebraska) have passed since.

3. Iowa at Indiana | Full scoreboard & TV info
Why you should watch: Amazingly, the Hoosiers control their destiny in the Leaders Division, as they come off a win at Illinois. The next step is vs. a Hawkeye team that has lost two games in a row and is struggling on both sides of the ball as it fights for its bowl life.

Player on the spot: Iowa RB Damon Bullock. He will have to carry the load with leading rusher Mark Weisman out with injury. Playing for the first time since suffering a concussion on Sept. 15, Bullock looked good last week, running for 107 yards in a loss at Northwestern. If Bullock and Iowa can run, it will take pressure off a struggling passing game. By the way: Indiana?s rush defense is last in the Big Ten (222.5 ypg).

Key note: Indiana?s go-go up-tempo attack runs a play every 21 seconds on average. Iowa?s defense needs to be ready, but it saw a fast-paced attack last week at Northwestern.

4. Illinois at Ohio State | Full scoreboard & TV info
Why you should watch: This is a battle for Illibuck! It?s also a battle between the best and worst in the Big Ten. But, Purdue waltzed into Ohio State on Oct. 20 and almost pulled an upset before falling in overtime. Can the Fighting Illini-who are riding a five-game losing streak–do the same vs. the 9-0 Buckeyes?

Player on the spot: The Ohio State linebackers. Any of them. Let?s go with Ryan Shazier. The athletic sophomore continues to develop as a playmaker. He needs to contain Illini quarterback Nathan Scheelhaase and the Illinois backs-Donovonn Young ran for 124 yards last week–to force them to the air.

Key matchup: Illinois quarterback Nathan Scheelhaase vs. the Ohio State front seven. For the Fighting Illini to have any shot of pulling the stunning upset, they need to find a way to score. The offense is last in the Big Ten in scoring (18.0 ppg). But the Buckeye defense hasn?t been a steel curtain, ranking eighth in the league in scoring defense (24.1 ppg) and last vs. the pass (277.9 ypg).

Key number: 10, Big Ten games lost in a row for Illinois, which needs to win out to become bowl eligible for a third season in succession.

Key note: Illinois has been outscored 194-62 during its five-game losing skid.

5. Penn State at Purdue | Full scoreboard & TV info
Why you should watch: The Boilermakers are looking for their first Big Ten win and to end a four-game losing streak. The Nittany Lions, who have won the last five meetings with Purdue, saw a five-game winning skein end last week vs. Ohio State.

Player on the spot: Purdue quarterback Robert Marve. Danny Hope is jettisoning Caleb TerBush and inserting Marve in hopes of sparking a struggling attack, as the 3-5 Boilermakers? bowl hopes are waning. Purdue is riding an ugly four-game losing skid and needs to start winning right now. The Boilers have lost three of those four games by 71 points and blew a lead and lost in overtime at Ohio State. Marve-he of three knee injuries–has made one start this year and injects a playmaking element into an offense that needs a boost. But with potential reward comes the risk of a mistake, which Marve is prone to make.

Key matchup: Penn State quarterback Matt McGloin vs. the Purdue secondary. McGloin has more passing yards (2,115) than any Big Ten quarterback as well as a league-high 16 touchdown tosses. The Boiler defensive backfield was torched last week by a true freshman quarterback at Minnesota, allowing 246 yards on just 15 completions (16.4 ypc) and three touchdown passes. If McGloin is slinging darts, Purdue will be in trouble.

Key note: Purdue has scored on its first possession in each of the last three games only to be outscored 111-44 the rest of the way in losing each contest.