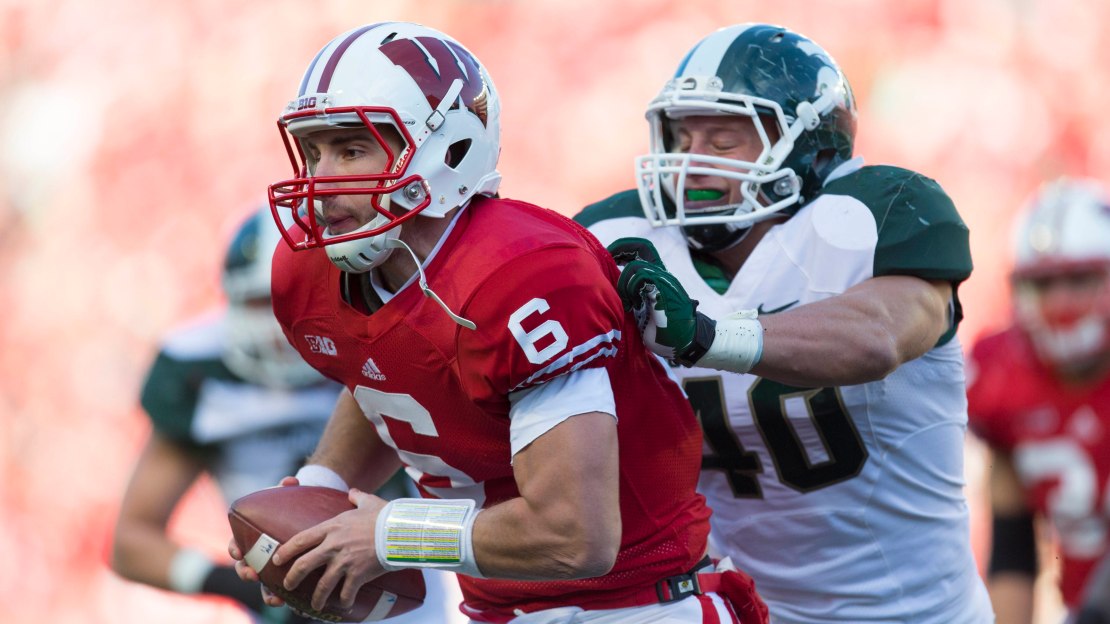 It's time for my latest Big Ten Player Rankings. There's one name making its debut on this week's installment. What other movement was there? Find out in this post. Remember, this feature ranks the Big Ten's top six offensive and defensive players. So, consider offense the Legends Division and the defense the Leaders Division, or vice versa.

OFFENSE
1. Braxton Miller, QB, Ohio State – It's safe to say Miller is back from last week's scare that knocked him out of the game and sent him to the hospital. The scintillating sophomore reclaimed his Hesiman-like play against Penn State's stout defense, amassing 277 total yards and accounting for three touchdowns, including a highlight-reel 1-yard TD run (Watch above).
Week 9 stats: 7-19, 143 yards, 1 TD, 1 INT; 25 car., 134 yards, 2 TD | 2012 stats
Previous ranking: No. 1

2. Venric Mark, RB, Northwestern – Early Saturday afternoon, Mark became the Big Ten's first player to 1,000 rushing yards, and the first in Northwestern history since 2006 (Tyrell Sutton). Mark torched Iowa for 10.1 yards per carry, including a 72-yarder (Watch it), however was held out of the end zone. The lack of a score, however, had more to do with the Wildcats turning to QB Kain Colter (3 rush TDs) near the goal line.
Week 9 stats: 16 car., 162 yards; 2 rec., 11 yards | 2012 stats
Previous ranking: No. 4

4. Taylor Martinez, QB, Nebraska – Martinez wasn't as prolific as he was in last week's comeback victory at Northwestern, although the situation didn't call for it Saturday night. The junior did what was needed to top Michigan and its stout defense, amassing 191 yards and throwing one touchdown (Watch it).
Week 9 stats: 14-24, 166 yards, 1 TD, 1 INT; 14 car., 58 yards | 2012 stats
Previous ranking: No. 5

5. Montee Ball, RB, Wisconsin – The previously white-hot Montee Ball looked more like the Mon-TAY version of himself against Michigan State's dominant defense. The 2011 Heisman finalist averaged just 2.1 yards per carry and was held out of the end zone for the second time in the last 29 games, dating back to the 2010 season.
Week 9 stats: 22 car., 46 yards | 2012 stats
Previous ranking: No. 2

6. Denard Robinson, QB, Michigan – Robinson's night was cut short Saturday due to a right arm injury. The senior left the game late in the second quarter and didn't return in the loss at Nebraska. Robinson wasn't incredibly effective before the injury, however there's no doubt the impact his departure had on the Michigan offense. Good news: Brady Hoke doesn't expect the injury to keep Robinson out.
Week 9 stats: 6-11, 55 yards; 10 car., 46 yards | 2012 stats
Previous ranking: No. 6

2. Jake Ryan, LB, Michigan – While Nebraska cooled off Ryan, who had been terrorizing Big Ten offenses the last few weeks, the linebacker still managed to tally four tackles and a tackle for a loss.
Week 9 stats: 4 tackles, 1 TFL
Previous ranking: No. 2