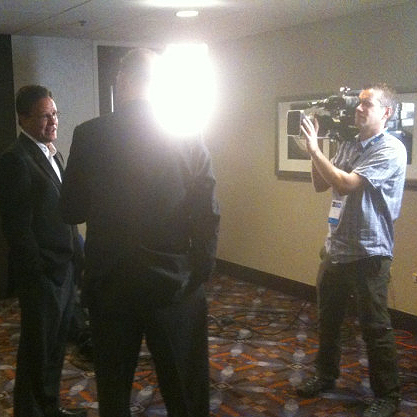 We'll update this post throughout the morning with tidbits from Big Ten Basketball Media Day. It may not be a surprise to hear that the media picked Indiana's Cody Zeller as the preseason Player of the Year and that Indiana is their choice to win it all. Penn State is picked to win the women's title and Penn State's Alex Bentley Ohio State's Tayler Hill shared the Player of the Year pick.

BTN's Tom Dienhart and Brent Yarina rolled out their individual lists too. Read Dienhart's list here and read Yarina's list here. You should get caught up on all of the uniform changes for men's basketball teams this season. BTN.com's Yarina tracks these changes and covered them in a  recent post.

Here's are some tweets from Thursday:

Most #B1G players are sharing tables with teammates. And then there's #Hoosiers Cody Zeller. http://t.co/A4lO5Ykc

Me? I'd love to see Adreian Payne and Derrick Nix in football pads.How good would they be as tight ends or d-ends? #Spartans #B1G

It will be fascinating to see how @TomCrean handles all of that talent and finds minutes for his loaded stable. #Hoosiers #B1G

I'd like to see a 3-point contest between these two former AAU teammates. #B1GMD http://t.co/c3jbMlTN

Tom Crean on depth, having so many good players to share time: "I'm not worried about that." http://t.co/I2NaCBgK

Here are some more stories from around the conference school websites:

To get reacquainted for the upcoming season, our Big Ten Geeks will return to blog about the numbers behind men?s basketball games all season in their special section of BTN.com. And BTN.com?s men?s school-by-school 2012-2013 schedules are here and the women?s schedules are here.

Also, BTN.com has rolled out our 2012 preseason player rankings leading up to the season. Agree? Disagree? Tells us.