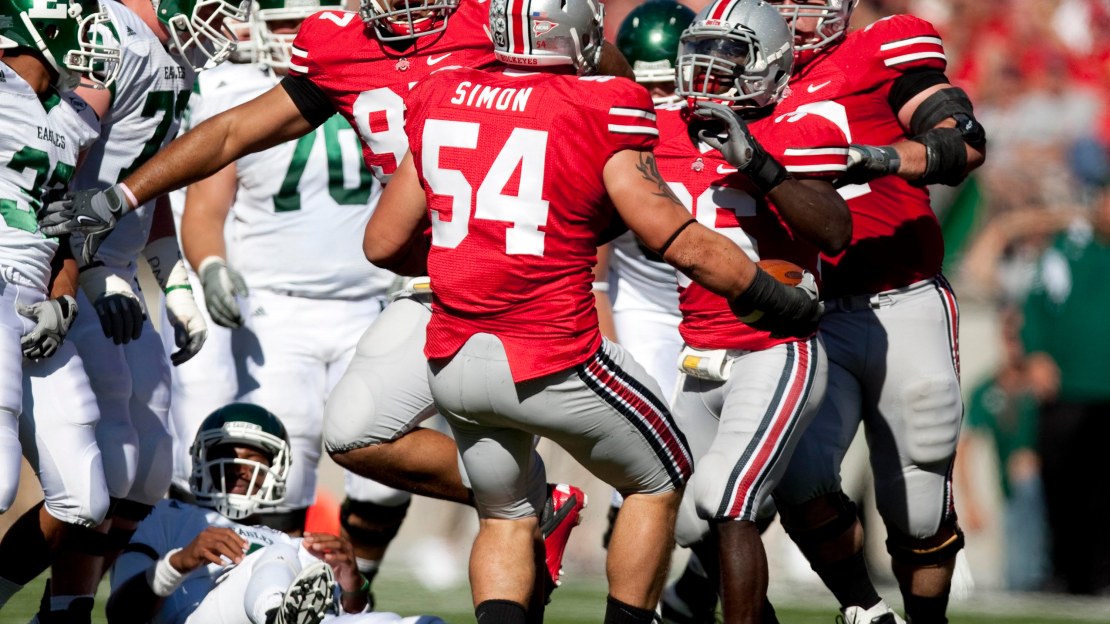 You have Big Ten questions, and I have answers. In this week?s Mailbag, I offer my prediction on who will meet in the second annual Big Ten title game and address Ohio State's struggling defense. And don?t be afraid to send questions for future Mailbags. Or you can send them my way on Twitter (@BTNTomDienhart).

If you had to pick right now, which teams would you have in the Big Ten championship game? – Matt P.

I think you have to go with Wisconsin in the Leaders Division. The Badgers? victory last week at Purdue puts them in the driver?s seat on that side of the league. I just don?t think Illinois, Indiana or the Boilermakers will be able to catch Wisconsin, which looks like it is gaining steam and improving each week. The Legends Division race is more interesting. Michigan looks like the hottest team. The Wolverines are 2-0 in league action, as is Iowa. But I?m not discounting Nebraska or Northwestern. They play this weekend, with the winner staying in good position. Still, I think Michigan is the team to beat down the stretch. So, get ready for Wisconsin vs. Michigan in the Big Ten title game!

Maybe Minnesota should sit MarQueis Gray except for the Purdue and Illinois games. He's so doggone fragile! Or, maybe Minnesota can go to the dual quarterback setup like Northwestern employs. – Curiouser

Gray hasn?t been fragile his entire career, but he has been banged up this season. And, no doubt, the Gophers aren?t the same team when he?s not under center. Gray?s presence makes the Minnesota rushing attack so much more effective. Max Shortell is a better passer than Gray. I bet Minnesota offensive coordinator Matt Limegrover has some schemes that use both on the field at the same time. Or, as you say, maybe Minnesota can bring each one in at different points of a game.

How can you continue to have Purdue getting into a bowl game? I think the Boilermakers have a chance to win only one more game this season (Illinois). Ohio State will run for 400 yards on Purdue; Minnesota, Penn State, Iowa, and Indiana are just plain better than Purdue. Eastern Kentucky, Eastern Michigan, and Marshall wins were nice but very misleading. – Dick Bossung

I have to agree with you on your last point in particular. Truth be told, Purdue?s defense was ripped badly in the win over Marshall. The Boilers are 3-3 right now. And I think they may struggle to get to six wins. The worst part of all of this: The 2012 squad was supposed to be the best of the Danny Hope era, the season he had been building toward. Alas, the season may be slipping away.

There are injuries and lack of quality depth, but is it too soon for Urban Meyer to hold the defensive staff at Ohio State accountable? This has been two consecutive seasons of uncharacteristically bad defense at Ohio State. Is this a trend and can it be fixed soon? – Dee

I think it?s something that can be fixed soon with a little bit of Urban Meyer recruiting magic. The former staff had some bad luck recruiting linebackers, as injury and lack of production-among other things-have transpired to make the position ineffective. It has gotten so bad that fullback Zach Boren played linebacker last week.

I am a Badger fan and I would love to believe you when you say Bucky may be back among the elite of the Big Ten after the demolition of Purdue. But I fear this result maybe more about Purdue being quite overrated than anything else. Even if Wisconsin is in line for the Leaders championship, they may be nothing more than a very fortunate 8-4 team. What are your thoughts? – Jason Skidmore

You may be correct. But I think this team is coming on. It?s not on the same level as last year because Russell Wilson is gone, but this still is a very good team that can win a third consecutive Big Ten title. The Badgers are 5-2 with games left vs. Minnesota; vs. Michigan State; at Indiana; vs. Ohio State; at Penn State. I think Wisconsin could end up 9-3-and no worse than 8-4. And, who knows, the Badgers also could win out.

Thanks for all you do. What happens if the Big Ten can?t fill all of its bowl slots? Do the games not get played? – Ryan Eaton

Yes, the games all still will be played-regardless if the Big Ten can fill its eight bowl slots. To review-those spots are: Little Caesars Pizza; Heart of Dallas; Meineke Car Care of Texas; Buffalo Wild Wings; Gator; Outback; Capital One; Rose. If the Big Ten can?t fill those, the bowls will turn to teams in other leagues that are bowl-eligible and looking for a postseason destination.

Heck, with the way Notre Dame is playing, it may get to the national title game. But, let?s say Oregon does play in the BCS title game vs. Alabama, I still doubt that ND would go to the Rose Bowl. If for no other reason than because Michigan and Notre Dame already have played this season. Yes, there have been other rematches in the bowls before in previous seasons, but they aren?t ideal.