Dienhart: Go ahead and book that trip to Indy 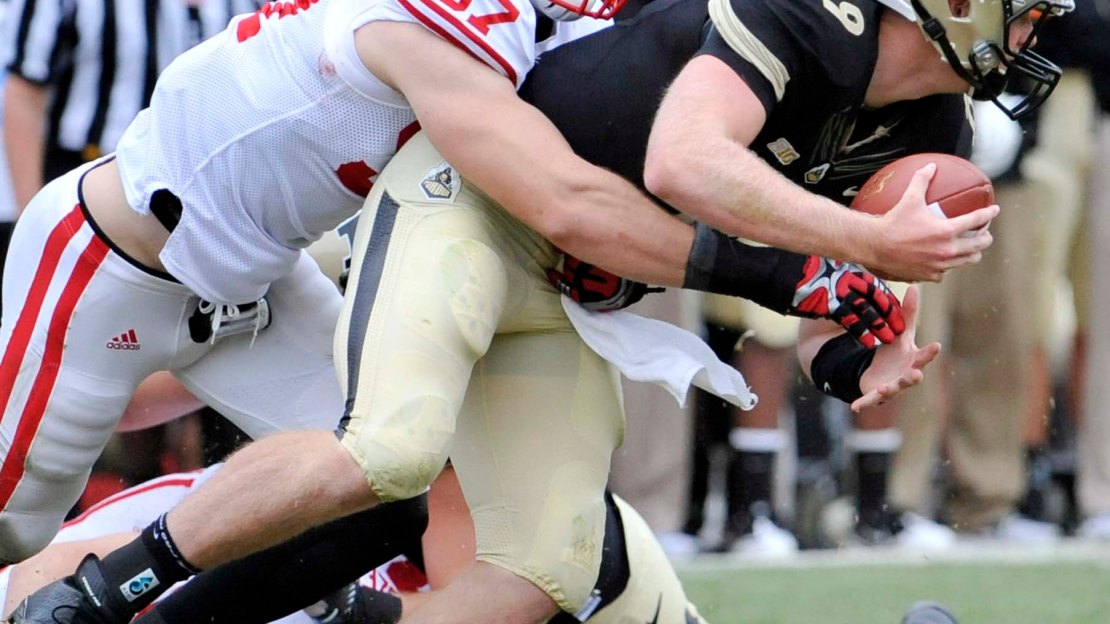 Wisconsin sent a loud message today. Did you hear it? Surely you did. I know it resonated with me.

The Badgers? emphatic 38-14 win at Purdue clearly marks Wisconsin as the team in the driver?s seat to earn the Leaders Division spot in the Big Ten title game for a second season in a row. In fact, the Badgers looked like they may have a shot to develop into the top team in the Big Ten this season. And that?s saying a lot when you consider where this program was about a month ago.

Sure, Wisconsin?s cause is helped by the fact Ohio State and Penn State are shackled with NCAA probation and banned from winning the Big Ten. Still, I?m beginning to think the Badgers may be as good as the Buckeyes and Nittany Lions-or anyone in the Legends.

We?ll find out for sure if the Badgers are tops in the Leaders when they finish the season Nov. 17 vs. Ohio State and Nov. 24 at Penn State.

[VIDEO: Watch all of our Week 7 Big Ten highlights]

Coming off a surprising 10-7 loss at Oregon State in the second game of the season that saw Wisconsin gain just 207 yards with only 35 on the ground, Bielema fired first-year offensive line coach Mike Markuson.

Then, at halftime of the Utah State game the next week, Bielema pulled starting quarterback Danny O?Brien and inserted redshirt freshman Joel Stave to spark a moribund attack. The Badgers hung on to win, 16-14, after the Aggies missed a late field goal that would have won the game. But Stave did enough to impress.

If not for blowing a 17-point lead at Nebraska on Sept. 29, the Badgers would have five wins in succession since that fateful loss in Corvallis, Ore. As it is, Wisconsin is now the unquestioned front-runner to represent the Leaders in Indy. Purdue? Illinois? Indiana? They all are 0-2 in league action. And none appears capable of challenging Wisconsin.

So, Badger fans, go ahead and make those reservations for Indianapolis and the Big Ten title game. Also, call ahead to get a table at St. Elmo?s, as your beloved Badgers aim for a third consecutive Rose Bowl trip and a bit of history. The last time a team went to three Rose Bowls in a row was Michigan, which did it after the 1976-78 seasons.

Montee Ball is fueling Wisconsin?s run. The senior may be out of the Heisman race, but he looks to have regained his 2011 form when he was a finalist. He ran for 93 yards at Nebraska, 116 vs. Illinois and a season-high 247 on 29 carries with three touchdowns at Purdue today. His third score was his 72nd touchdown of his career, which set a Big Ten record.

Stave remains a work in progress under center, but he operates Wisconsin?s vaunted play-action pass series with aplomb. And even more vital: Stave has limited mistakes. On this day, he hit 12-of-21 passes for 178 yards with a touchdown and pick.

And that once-maligned offensive line? It?s getting better and better behind the stewardship of Bart Miller, a GA who took over coaching the line and has done a nice job. Miller is part of a staff that underwent lots of tumult in the offseason with six new assistants. Now, it seems to be coming together behind and offense and new coordinator Matt Canada.

The Badger front thoroughly dominated a Purdue defensive line that was supposed to be one of the best-if not THE best-in the Big Ten. Wisconsin ran 57 times for 467 yards (8.2 ypc) and notched its second-best yardage total ever with 645. Last week, Michigan ripped the Boilermakers for 304 yards.

Don?t look now, but 3-3 Purdue has lost two lopsided games in a row at home and plays at Ohio State next week. Will the Boilermakers get bowl eligible?

[CHAMPIONSHIP GAME TICKETS: Guarantee yourself a ticket if the Badgers make it]

The near-future looks much brighter for Wisconsin. Up next is a visit from Minnesota and a battle for Paul Bunyan?s Axe. The Gophers will arrive in Madison having lost two in a row after a 4-0 start. Then for the Badgers comes a visit from slumping Michigan State on Oct. 27 in what will be a rematch of last season?s inaugural Big Ten championship game. That?s followed by a game at Indiana, then Ohio State in Madison and at Penn State.

Wisconsin may be able to afford to lose two of its remaining five games and still have a record better than Purdue, Illinois or Indiana.

For now, the Badgers will savor this win-and take a moment, however fleeting-to glance at where it has come from in a scant 30 or so days and where it is headed.