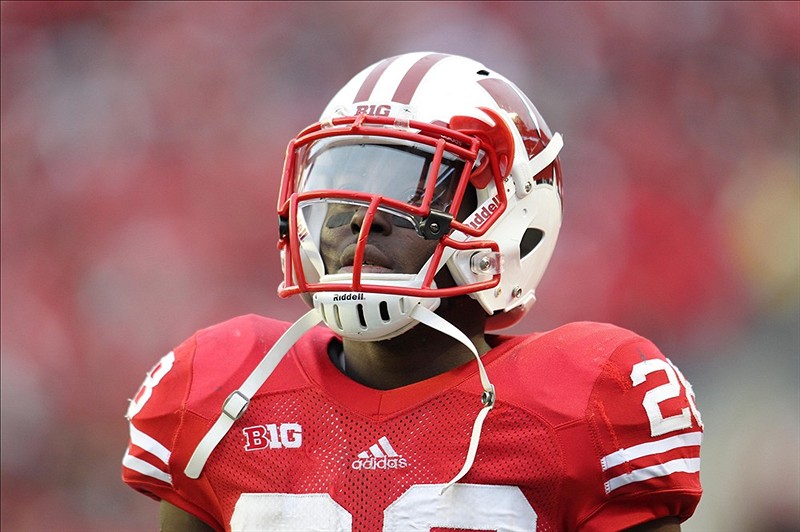 Having taking a long, hard look at each Saturday's five Big Ten football games, I'm offering up my weekly rankings of the games here. Wisconsin at Purdue is a big one in a weird season for the Leaders Division while Iowa at Michigan State offers up two Legends Division teams looking to stabilize their seasons.

I?ll be tracking all of the games and filing my usual Snap Reactions. Follow me on Twitter @BTNTomDienhart and drop me any questions at the bottom o this post. Be sure to also bookmark any of these links and get in-game updates on Saturday: Illinois at Michigan, Iowa at Michigan State, Northwestern at Minnesota, Ohio State at Indiana, and Wisconsin at Purdue

1. Wisconsin at Purdue | Big Ten Scoreboard
Why you should watch: The season is about half over, but this could be the game that decides who ends up representing the Leaders Division in the Big Ten title game. Remember: Ohio State and Penn State aren?t eligible. And Indiana and Illinois? Well, let?s just say that they don?t appear capable. So, this probably is it, as the winner of this tilt in West Lafayette will be in great shape.

Player on the spot: Purdue quarterback Caleb TerBush. The great debate around West Lafayette is if TerBush or Robert Marve should start. The offense seemed to get a spark when Marve played late last week vs. Michigan. But Danny Hope likes TerBush?s decision-making and says he will start. But, Marve will play. Regardless, the quarterback spot has to make some plays for the Boilermakers to win. Oh-by-the-way factoid: The Badgers haven?t lost at Purdue since 1997 and have won six in a row in the series.

Key matchup: The Boilermakers got trucked 44-13 last week at home by Michigan, which ran for 304 yards. While the Badgers ground game is just 11th in the Big Ten (133.5 ypg), it seems to be gaining steam. Montee Ball ran for 116 yards last week in a 31-14 win over Illinois and had 93 the week before in a loss at Nebraska. Michigan had great success attacking the edges of the Boilermaker defense, which has some nice players up front in tackles Kawann Short and Bruce Gaston and end Ryan Russell. Expect Wisconsin to do the same vs. a Purdue defense that is No. 9 vs. the run (146.0 ypg).

Key note: Purdue will get a lift from the return of running back Ralph Bolden, who has yet to play this season as he recovers from a third knee injury. He could be a needed difference maker for the Boilermakers.

2. Iowa at Michigan State | Big Ten Scoreboard
Why you should watch: These teams have lots in common as they look to stabilize on offense after what have been uneven first-halves of the season for both. How bad has it been on offense? Iowa is No. 10 in the Big Ten in scoring (22.6 ppg); Michigan State is No. 11 (21.8). The winner will be positioned for a nice run at the Legends Division crown. Iowa was off last Saturday and saw captain and star defensive back Micah Hyde arrested. However, he won?t miss this game. The last time these teams met in East Lansing, Iowa scored a last-second, game-winning touchdown.

Player on the spot: Michigan State RB Le?Veon Bell. The big fella is the engine that makes the Spartan attack go. He has toted the rock over 30 times in three games this season, including a Herculean 44-carry effort in the season opening victory vs. Boise State. If the Spartans get him established, they will shine. By the way: Iowa is No. 3 in the Big Ten vs. the run (111.0 ypg).

Key matchup: Iowa running backs vs. Michigan State front seven. The Hawkeyes will get a boost from the return of Damon Bullock, who has missed the last two games with injury. He will join red-hot Mark Weisman-a growing folk hero–to give Iowa a nice 1-2 punch. And the Hawkeyes will need it vs. the Big Ten?s No. 1 rush defense (86.0 ypg). Spartan linebackers Max Bullough and Chris Norman, along with end William Gholston, are tough to push around. In the end, Iowa may have to pass to have any shot of winning.

Key number: 0.83, number sacks per game for Michigan State. That ranks last in the Big Ten. The Spartans also are just eighth in tackles for loss per game (5.2).

Key note: Michigan State tight end Dion Sims will miss the game with an ankle injury, which will hurt a passing game that has lacked consistency. Sims paces the team with 24 catches. Redshirt freshman Paul Lang and junior Derek Hoebing will have to step up. True freshman wideout Aaron Burbridge is coming off a big game at Indiana (8 catches for 134 yards) and may be the new go-to guy.

3. Northwestern at Minnesota | Big Ten Scoreboard
Why you should watch: These have been two of the Big Ten?s Cinderella squads. The Wildcats suffered their first loss of 2012 last week at Penn State, blowing a 28-17 lead they held early in the fourth quarter and succumbing 39-28. The Golden Gophers were off last week, allowing them time to convalesce from a 31-13 whipping at Iowa that was Minnesota?s first defeat of the season.

Player on the spot: Northwestern QB/WR/RB Kain Colter. The guy is the ultimate jack-of-all-trades. He has 395 yards rushing; 369 yards passing; 764 yards of total offense. Colter needs to play a big role vs. Minnesota, as his versatility creates opportunities for others-see running back Venric Mark–in this dynamic Northwestern attack.

Key matchup: Minnesota offensive line vs. Northwestern defensive line. The Golden Gophers must establish the run to have any shot. And that was an issue in the loss at Iowa with quarterback MarQueis Gray and his ability to run not in the lineup. Minnesota ran 32 times or 102 yards (3.2 ypc) at Iowa. The Wildcats rank second in the Big Ten vs. the run (102.7 ypg). Linebackers Chi Chi Ariguzo and David Nwabuisi and end Tyler Scott are active forces for Northwestern who must bottle up Gopher back Donnell Kirkwood.

Key number: 11, sacks for the Golden Gophers after they had 19 all of 2011. And they have yielded just nine this season. The last time Minnesota finished with more sacks than it allowed was 2008 (34-30).

Key note: Will Minnesota quarterback MarQueis Gray play? Earlier this week, Gopher coach Jerry Kill made it sound like there was a possibility the massive signal-caller may get on the field. The Gophers sure could use him.

4. Illinois at Michigan | Big Ten Scoreboard
Why you should watch: This is a game that pits two teams seemingly headed in opposite directions. Illinois has lost three in a row, getting out scored 118-45 in the process vs. Louisiana Tech, Penn State and Wisconsin. Conversely, Michigan looks to have some mojo, whipping Purdue, 44-13, following an off week. But will the Wolverines look past the Fighting Illini with a big visit looming from Michigan State on Oct. 20?

Player on the spot: Illinois quarterback Nathan Scheelhaase. He injured an ankle in the season opener and never really has gotten on track, missing two games and almost all of a third. Scheelhaase showed some sparks last week in a 31-14 defeat at Wisconsin, running for 84 yards and a score and passing for 178 and a touchdown in what was a 7-7 game in the third quarter. But the Michigan defense is coming on, ranking No. 2 in the Big Ten (311.8 ypg) and allowing just 213 yards last week vs. the Boilermakers.

Key matchup: Michigan offensive line vs. Illinois defensive line. Brady Hoke called out his line at halftime of the Notre Dame game. And the unit has responded in kind after the ugly 13-6 loss, playing its best game of the season last week in a 44-13 victory at Purdue in helping the Wolverines run for 304 yards. The unit must again dominate to open space for Denard Robinson, who ripped off 235 yards rushing vs. Purdue to become the Big Ten?s all-time leading rusher among quarterbacks. But this is a talented Illini defensive front led by tackle Akeem Spence and end Michael Buchanan. Illinois ranks No. 6 in the Big Ten in rush defense (124.5 ypg).

Key number: 21.2, points scored per game for Illinois. That ranks last in the Big Ten and No. 102 in the country.

Key note: The schools have split the last four meetings. And Michigan is just 4-3-1 vs. Illinois in Ann Arbor in the last eight encounters, with the Illini winning in the Big House in 1993, 1999 and 2008.

5. Ohio State at Indiana | Big Ten Scoreboard
Why you should watch: Can the Hoosiers pull off the upset? They pushed Michigan State to the limit last week, building a 27-14 halftime lead before being outscored 17-0 in the second half and falling 31-27. Ohio State is the lone unbeaten team left in the Big Ten and is motivated to finish perfect since NCAA probation will prevent the Buckeyes from winning the Big Ten or playing in a bowl. But Ohio State still can win the AP national title and get a Leaders Division championship trophy.

Player on the spot: Let?s make this ?players.? Indiana defensive tackles Larry Black Jr., and Adam Replogle need to at least try to hold the line vs. Braxton Miller and the Ohio State rushing attack that ranks No. 2 in the Big Ten and No. 10 in the nation (248.7 ypg). The Buckeyes should be salivating at the fact Indiana is last in the conference vs. the run (196.8 ypg). Can Ohio State win this game and throw fewer than 10 passes? And if the Buckeyes get a big early lead, will Miller be taken out? That could damage his Heisman hopes.

Key matchup: Indiana offense vs. Ohio State defense. The Hoosier offense has played pretty well with Cam Coffman taking over for injured Tre Roberson at quarterback. And that?s good, since Indiana?s only chance to pull the stunner is to outscore Ohio State. The Hoosier offense is No. 2 in the league (472.4 ypg). The Buckeye defense is No. 10 (386.5 ypg) and has been especially vulnerable vs. the pass, ranking 11th (265.3 ypg).

Key number: 2, turnovers lost by Indiana, which are the fewest in the Big Ten.

Key note: The Hoosiers are trying to win their first Big Ten game since knocking off Purdue in West Lafayette at the end of the 2010 season.