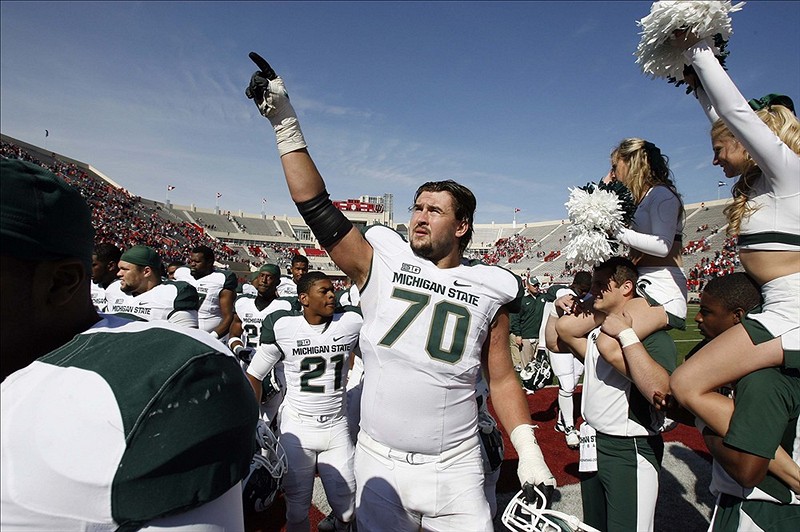 The time is now for Michigan State. There is a sense of urgency around this week?s visit from Iowa. In fact, the game almost has a ?must-win? aura about it. The Spartans are 4-2 overall and 1-1 in the Big Ten. After this game with the Hawkeyes, Michigan State will embark on its most arduous phase of the season, playing at Michigan and at Wisconsin before coming home to play Nebraska and Northwestern.

That?s why winning this game against Iowa is so vital to the Spartans.

The Legends Division champ is likely to have two losses-at the most-in Big Ten action. Michigan and Iowa are each 1-0; Nebraska and Northwestern are 1-1, like the Spartans. Minnesota is 0-1. Full standings are right here.

Michigan State is still an unfulfilled program under Mark Dantonio. Don?t get me wrong: He has accomplished a lot in his tenure in East Lansing since taking over in 2007, notching a 48-24 overall record and 28-14 Big Ten mark. Dantonio led the Spartans to the Legends Division title last season, going an aggregate 22-5 overall and 14-2 in Big Ten action the past two years. The program is on a roll.

But something is missing. A Big Ten championship. A trip to the Rose Bowl. Those would be the final pieces to Dantonio?s Michigan State scrapbook since taking over for the mercurial John L. Smith. The Spartans are one of just four Big Ten teams that haven?t played in a BCS bowl (Northwestern, Indiana and Minnesota are the others).

If Dantonio and Michigan State don?t make a run at the Roses this season, is the window closing with Michigan and Ohio State seemingly gaining momentum under Brady Hoke and Urban Meyer, respectively? Plus, Wisconsin-the two-time defending Big Ten champs-remains a power, too. And you know Nebraska only will get better.

So, the time appears to be now for Michigan State. This is a good team. And let?s face it, the Big Ten isn?t very strong this season. The Spartans were thought to be the cream of the crop back in August by some, including myself.

Ohio State and Penn State are out of the Big Ten equation because of NCAA probation. Questions surrounded many other teams before the season. Wisconsin was without star quarterback Russell Wilson and three offensive linemen. Michigan?s defense had questions up front, and the offensive line and receiving corps were unknowns. Nebraska was looking for playmakers on defense and didn?t know how quarterback Taylor Martinez would look. Iowa was young and rebuilding.
And then there were the Spartans.

Michigan State welcomed back eight starters from what was the top defense in the Big Ten in 2011. Yes, the offense had to replace quarterback Kirk Cousins and standout receivers in B.J. Cunningham, Keshawn Martin and Keith Nichol. But potential loomed with what many felt was the best offensive line in Dantonio era. Plus, star running back Le?Veon Bell was back to carry a big load while the passing game rounded into form.

Well, it has been a bumpy first half of the season for the Spartans, who face a crossroads of sorts this Saturday at home.
The Michigan State offense ranks eighth in the Big Ten (389.0 ypg), with the rushing game ninth (143.2 ypg) and the passing attack third (245.8 ypg). While as a whole those numbers don?t seem terrible-save for the rushing game-it?s vital to note that the Spartans are ninth in the Big Ten in the most important offensive category of all: scoring. MSU averages 21.8 points. Only Illinois is worse at 21.2.

Quarterback Andrew Maxwell has had his moments and his numbers look solid, but the junior has had some accuracy issues and still can struggle with his decision making.

The offensive line has disappointed, thanks largely to injury. Tackle Fou Fonoti and center Travis Jackson both are out, compromising the integrity and depth of the front.

The receivers have struggled, as veterans like Bennie Fowler, Keith Mumphery, Tony Lippett, Andre Sims and Tennessee transfer DeAnthony Arnett have struggled to catch the ball and stretch the field. True freshman Aaron Burbridge was inserted into the lineup last week at Indiana and showed he may be the answer after making a team-high eight receptions for 134 yards in a game that Michigan State pulled out of the fire. The Spartans trailed 27-14 at halftime and 27-17 after three quarters before scoring 14 unanswered point in the fourth quarter to take a 31-27 triumph.

Perhaps Michigan State will look back in December at the win at Indiana as the turning point of the season. Or, maybe that turning point will come Saturday against Iowa.

[RELATED: Watch and share the latest amazing video clips from around the Big Ten.]

Speaking of Iowa, it mirrors the Spartans in many ways, having played solid defense most of the season but struggling on offense. The Hawkeyes won on a touchdown pass as time expired the last time they visited Michigan State in 2009 to move to 8-0 for the first time in school annals. Today, the Hawkeyes are just 10th in scoring with a 22.6-point average.

But, unlike Iowa, Michigan State came into the 2012 season with big expectations. The Hawkeyes are supposed to be in rebuilding mode. The Spartans? This is a team that?s supposed to be ranked and have no more than one-if any-losses at this juncture of the season.

But, here is Michigan State-probably needing to go at least 5-1 down the stretch to have a shot at winning the Legends and then going to the program?s first Rose Bowl since the 1987 season.

It?s all right there for Michigan State. And the season really starts right now.

GRID BITS: Kirk Ferentz is aiming for 100th win as Iowa coach ? Recall the last time Illinois played at Michigan? May records fell, as Denard Robinson threw for 305 yards and three touchdowns before leaving with an injury after three quarters in a wild 67-65 Michigan victory in three overtimes back on Nov. 6, 2010. It was the highest-scoring game in Big Ten history. ? Speaking of Illinois, it leads the Big Ten in turnovers with 16. ? Indiana is the lone Big Ten team that hasn?t lost a fumble. ? The Big Ten leading passer (Matt McGloin), leading receiver (Jared Abbrederis) and fourth-leading rusher (Mark Weisman) each arrived on campus as walk-ons. ? Since losing to the Hoosiers in 1987 and 1988, the Buckeyes have gone 18-0-1 vs. Indiana. ? Wisconsin has won six straight games vs. Purdue, dating to 2004. The Badgers haven?t lost in West Lafayette since 1997 and have a four-game winning skein against the Boilermakers at Ross-Ade Stadium. ? Iowa quarterback James Vandenberg is 2-6 in road starts. At home, he is 9-3 as a starter. ? Michigan State is 16-1 when Le?Veon Bell scores at least one rushing touchdown. ? Northwestern?s Venric Mark is one of three FBS players with two or more punt returns for touchdowns this season. … Minnesota?s total offense numbers have gone down in each game: 478; 412; 397; 337; 299. ? Purdue will honor ex-Boilermaker great running back Otis Armstrong (1970-72) at Homecoming this Saturday for his election to the College Football Hall of Fame. ? Iowa?s opponents thus far have gone 9-4 (.692 winning percentage); Michigan States have gone 15-7 (.682). Those are the top two opponent?s winning percentages among Big Ten schools.