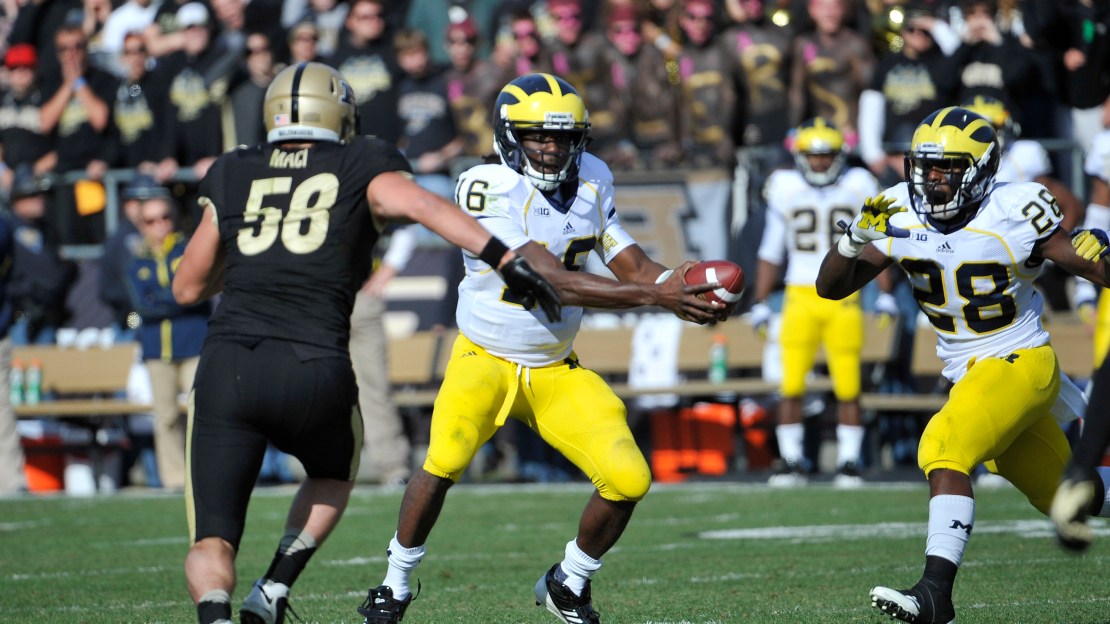 Denard Robinson rushed for 235 yards and Fitzgerald Toussaint scored twice to help Michigan rout Purdue 44-13 on Saturday afternoon. The Wolverines (3-2, 1-0 Big Ten) have won three straight over Purdue. The Boilermakers (3-2, 0-1 Big Ten) lost at home for only the second time since Oct. 1, 2011.

It was a banner day for Robinson in his first game back from a dismal performance at Notre Dame. He had three runs of 35 or more yards, finished 8 of 15 for 105 yards, moved into fifth place on Michigan's career rushing list, fourth on the school's career passing list and broke the Big Ten's career rushing record among quarterbacks.

Toussaint opened the game with two short scoring plunges – making it 14-0 before Purdue had a first down.

Michigan made it 21-0 on Raymon Taylor's 63-yard interception return for a score. The Boilers never get closer than 18.

FINAL: Denard Robinson was unstoppable, as he racked up 235 rushing yards to lead Michigan to a 44-13 victory over Purdue on Saturday at Ross-Ade Stadium. Home run plays keyed the Wolverines' scoring attack. Michigan had five plays of 20 yards or more on its way to victory. With 12:42 to go in the fourth quarter, Robinson scrambled 59 yards, the Wolverines' biggest gain of the game.

The big gainer was part of a seven-play drive capped off when Brendan Gibbons drilled a 41-yard field goal. That gave Michigan a 34-13 lead.

The Boilermakers' Caleb TerBush was good for 106 yards during the game, completing 16 of 25 passes. TerBush tossed one touchdown and one interception. TerBush had a good connection with receiver O.J. Ross. He caught eight passes for 45 yards and one touchdown.

Purdue's offense finished the game having gained 213 yards, including 156 passing yards on 23 completions. The Boilermakers' ran for just 57 yards on 26 attempts.

The Wolverines racked up 408 total yards. In addition to Robinson's efforts through the air, Michigan also rushed 54 times for 304 yards.

The Wolverines' Robinson went eight of 16 through the air for a total of 104 yards. Robinson finished the game with one touchdown and no interceptions.