Dienhart: This is the Michigan we expected 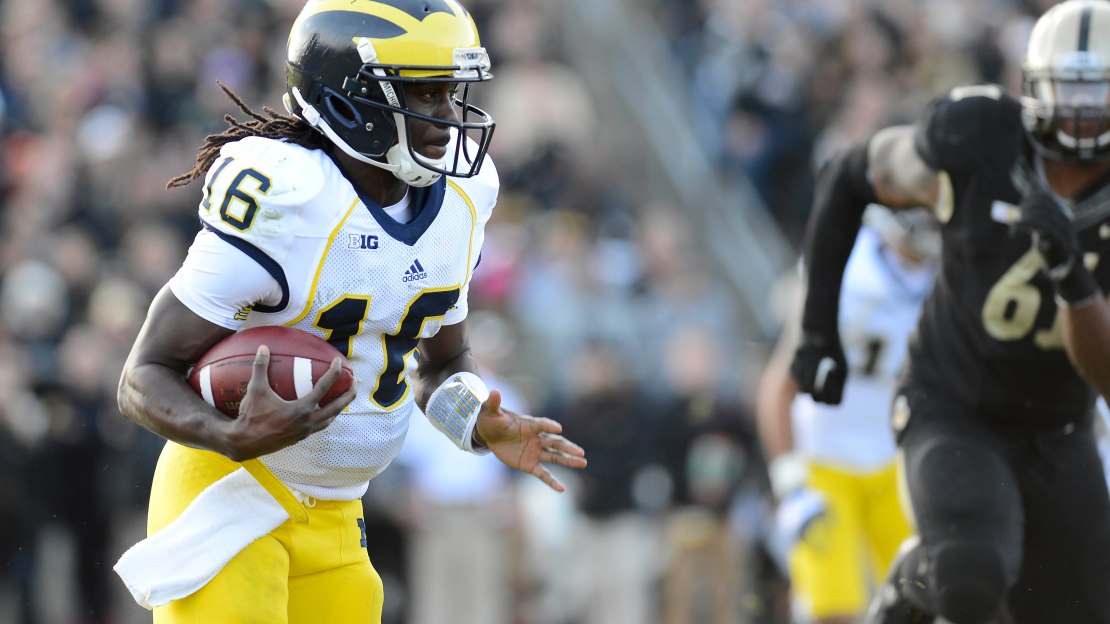 WEST LAFAYETTE, Ind. — Today was all about Denard Robinson. That was good for Michigan. And that was bad for Purdue. You see, Robinson had something to prove on this day. The last time we saw the senior, he was throwing four interceptions and losing a fumble in an ugly 13-6 loss at Notre Dame that-truthfully-Michigan should have won.

Today, Robinson looked like the Heisman contender everyone thought he would be before the season in a thoroughly dominating 44-13 win over Purdue that really wasn?t that close.

Robinson ran 24 times for 235 yards, averaging a robust 9.8 yards per carry vs. what was purported to be an elite Purdue defensive line. In the process of shredding the Boilermakers, Robinson became the all-time leading rushing quarterback in Big Ten annals.

But Robinson wasn?t the real story on this day. Nope. Not by a long shot. The real story was the return of Michigan.

That?s right. This victory loudly announced that the Wolverines are indeed alive and kicking after a 2-2 non-conference season that had most of America doubting Michigan?s prowess. And some even perhaps writing them off.

Was this the same program that went 11-2 last season, which it capped with a Sugar Bowl win over Virginia Tech? Was this really the program that opened the season as the highest ranked Big Ten team in the preseason AP poll at No. 8?

Today was a giant step toward showing Michigan indeed may be the top team in the Big Ten-or at least one of them in what looks like a jumbled conference scramble.

During that .500 start that also included a 41-14 whipping vs. Alabama in Arlington, Texas, America may have been unfairly judging Michigan. Yes, the Wolverines looked ugly in those aforementioned defeats to Alabama and Notre Dame, but those are two of the better teams in the nation. And no other Big Ten team was tested as severely in the non-conference as Michigan. We all would have been throwing roses at the feet of Michigan if it had played the same non-league schedule as, say, Minnesota or Iowa.

Another thing to remember about this Michigan squad: It?s a young club dominated by freshmen and sophomores. Growing pains are to be expected along this 2012 journey. Perhaps the toughest parts are behind Michigan. If so, look out.

The arduous non-con schedule has hardened this Michigan team and caused it to look deep inside itself, evaluating how it could get better. There is no way the Wolverines would have had to do that soul searching if they had played pushovers in the non-conference.

Today we saw the full power and potential of Michigan spit out the other end of that tough non-league menu. We saw the glory of Denard Robinson, whose 340 yards of total offense were more than Purdue had as a team (213). We saw the beauty of the defense, which generated four turnovers and rationed the Boilermakers 56 yards rushing on 26 carries.

And it was all a beautiful thing-and perhaps a sign of things to come the rest of the season.

And on it went.

This game essentially was over after 15 minutes. Michigan totally dominated the opening quarter, out gaining the Boilermakers 111 yards to eight. And the Wolverines ran 23 plays to Purdue?s six, as they built a 14-0 lead that felt like 114-0.

The game plan of Wolverine offensive coordinator Al Borges was obvious: Michigan wanted to establish Robinson on the ground after he was coming off a rough outing at Notre Dame.

Robinson looked nothing like the Robinson we saw two weeks ago at Notre Dame. Robinson ran left, he ran up the middle, he ran right and he ran pretty much anywhere he wanted to run on this cool, crisp fall afternoon. He also found some time to pass, hitting 8-of-16 attempts for 105 yards with a score.

While it was difficult to not be impressed with Robinson on this afternoon, he still has to ?prove it? vs. top-notch foes.

Over the course of a spectacular career that has seen him pile up yards and accolades and scatter his name throughout the record book, Robinson largely has done most of his damage feasting on overmatched foes. When he has played ranked teams, Robinson typically has struggled.

Check it out: Robinson has played 15 games vs. Top 25 teams in his career. And he has completed just 54 percent of his passes for 1,688 yards with 12 touchdowns and 17 picks. He also has averaged 59.2 yards rushing.

Purdue? It wasn?t a ranked team, as it lost what many felt would be a breakout game for the program under Danny Hope.

No, Robinson won?t be judged vs. foes like this. We know what he can do vs. the Purdues, Indianas, Minnesotas, UMasses of the world. Robinson will be judged three more times in 2012: vs. Michigan State on Oct. 20; at Nebraska on Oct. 27; at Ohio State on Nov. 24.

It will be those games that determine if Michigan can reach the Big Ten title game and claim its first league crown since 2004.

But let?s not get ahead of ourselves and try to enjoy this moment. For now, this win means Michigan is right in the thick of the Legends Division race. Now, the Wolverines look primed to perhaps live up those lofty preseason expectations.