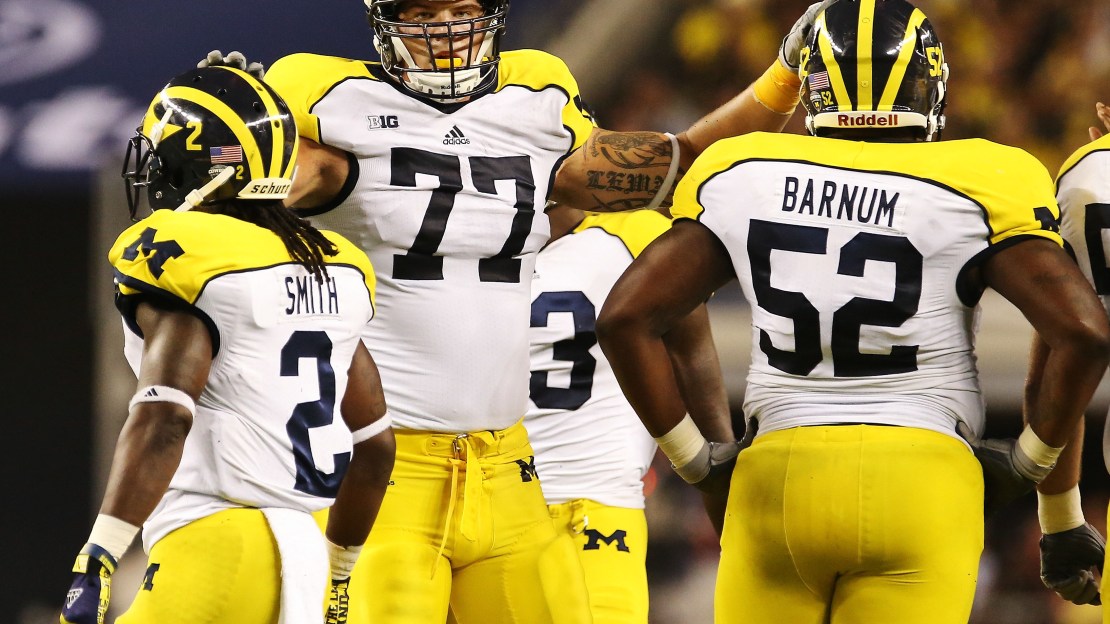 In many respects, Michigan?s season starts now. The 2-2 non-conference record? The ugly losses to Alabama and Notre Dame? Forget about them.

Michigan offensive tackle Taylor Lewan is focused on the here and now. Big Ten play is starting for his Wolverines. It?s a new beginning-with new hope-for a program that shocked many by going 11-2 last year with a Sugar Bowl win over Virginia Tech.

Lewan and the line must play a big role if Michigan hopes to win its first Big Ten crown since 2004. The 6-8, 309-pound junior is the anchor of a Michigan line that was challenged by Brady Hoke. The Wolverine boss confronted the line at halftime of the Notre Dame game. He demanded the line to pick it up and protect Denard Robinson. Keep defenders out of his face. It was about delivering a message. And Hoke thinks the unit is starting to come around after having issues with chemistry the first month of the season.

Still, there is room to improve. Lewan–second-team All-Big Ten by the coaches and honorable mention by the media last season–knows that. The Wolverines attack ranks sixth overall in the Big Ten (393.8 ypg), and is No. 6 is rushing (184.5 ypg) and No. 9 in passing (209.3 ypg). The Wolverine running backs have notched just 276 yards rushing (69.0 ypg) in four games. And the front really hasn?t enjoyed one, solid effort of football from the first to fourth quarter all season. Lewan is looking to change that this weekend.

The Scottsdale, Ariz., native will make his 20th consecutive start this Saturday at Purdue in a big game for both programs. Michigan was off last week after an ugly loss at Notre Dame. A win over the Boilermakers would restore Michigan?s confidence and keep it on track in the Legends Division, which looks wide open.

I caught up with Lewan as he prepped for the Boilermakers.

Q: Do you think the line has responded to the challenge by Hoke at halftime of the Notre Dame game?
A: I think the line as a whole did a great job responding. If you are going to be a championship team, you have to win in the trenches. That?s how it has to be for the offensive line and defensive line the rest of the year.

[RELATED: Read all of Dienhart's Q&As]

Q: Has the line developed some chemistry?
A: I really do believe that happened in the Notre Dame game. We have good players on the line, and we have to keep playing consistent. If 10 guys are doing their job and one guy isn?t, then we aren?t going to get the job done. We have to have 11 guys on the ball and in rhythm.

Q: What have you been happy with in your play this season?
A: I think I have become more consistent as a whole, be it pass protection or running the blocking. I was just talking to Denard (Robinson), and I haven?t given up a sack since he has been my quarterback. And I plan to keep it that way. He?s my guy. And that?s my thing, protecting the quarterback and running back always.

Q: Do you think Michigan benefited from playing one of the toughest non-conference schedules in the nation?
A: Absolutely. When you come to Michigan, you go to play teams like Alabama. You go to play the best teams. You also come to win a Big Ten championship. It was a good learning process for us vs. Alabama, and we learned a lot against Notre Dame. But it all will help us in the season that matters and that?s about to start, the Big Ten season. It?s about winning that Big Ten title now.

Q: What did the offense focus on during the off week?
A: The offense, we got back to fundamentals, from stepping in the right spots on a run block to keeping your shoulders square in pass protection. Little things like that on the offensive line. A lot went back to fundamentals and technique. And those are the things that will win your block every time.

Q: What do you think of the Purdue defensive line, guys like Kawann Short, Bruce Gaston and Ryan Russell?
A: I talked to Kawann Short a couple times last year during the game when we played them. I think he?s a great player. Not just Kawann Short, but all of those guys. Those guys really know what they?re doing and you can tell that they are really well coached. I?m really excited about the challenge of playing some great players.

Q: What do you think when you hear people criticizing the Big Ten?
A: For now, the record shows what it shows. In non-conference games, you aren?t only representing your team, but you are representing the Big Ten. And we have to take pride in the conference.

Q: How important is it to send Robinson out on a high mark as a senior?
A: Our goal is always a Big Ten championship. And with Denard at quarterback, that is very possible for us. People who aren?t inside Schembechler Hall, they don?t know that that game (Notre Dame) wasn?t Denard?s fault. He threw a couple interceptions. But we had so many missed assignments as a whole offense and we can never have that. We ran the wrong route or had the wrong protection that put him in bad situations that we can?t do.

Q: Have any of your linemates stepped up and surprised you this season?
A: I know what all of our guys are capable of. I?ve seen the best and I?ve seen the worst. A couple guys have stepped up to the challenge. One is Elliott Mealer. He has done a great job at center. Everyone is looking at him and at what he does wrong that David Molk would have done right. Everyone is focusing on that. He?s not David Molk. But he?s still a helluva center. I am excited about how he has played and taken the challenge. He?s the leader of the line. He?s our quarterback. I?m happy about him.

And our left guard Ricky Barnum, too. He has stepped up the challenge with his techniques and fundamentals. He also has been aggressive at the point of attack.