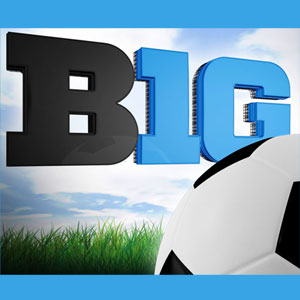 Normality prevailed this past weekend as Indiana and Northwestern got their conference seasons off to a winning start. However, the standout result of the weekend was Penn State?s impressive road win at Wisconsin.

The Badgers' struggles this season have been documented, but this was never going to be an easy game for the Nittany Lions, especially after a long trip to Madison. What surprised me was the sheer one-sided nature of the statistics. I?m not one to read into stats too much, but when the road team outshoots the hosts, 23-9, that says a lot about the overall pattern of the contest.

In the end, Bob Warming?s side only took one of those 23 attempts and came away victorious, 1-0. At 6-1-1, Penn State looks like the real deal so far.

In this week?s edition of BTN Soccer Report, Coach Warming spoke about his love for his team, his program and the University. The Penn State community has obviously been through a lot of turmoil recently, so it?s refreshing to hear the affection and love Warming has for his school, and the strides they?re taking to turn Penn State into a soccer powerhouse.

So who will Penn State challenge for Big Ten honors? After this weekend, my answer remains the same: Indiana and Northwestern.

Indiana was extremely impressive in its 2-0 win over Ohio State in Columbus, even without playmaker Nikita Kotlov, who was ruled out through illness. Ohio State had the better chances over the course of the 90, but in Eriq Zavaleta, Indiana has a player that will pounce when called upon.

Zavaleta was quiet throughout, but at times he treated us to some wonderful skill and awareness. He notched his seventh goal of the season from the penalty spot, and that put the sophomore eighth in the nation in scoring.

Todd Yeagley will be pleased after an impressive road win, however his defense gave up a lot of gilt edge chances. Luis Soffner produced heroics to stop a Chris Hegngi header from point blank range at the beginning of the second half, and Austin McAnena also went close, rattling the bar from distance with a strike that had Soffner well beaten.

Ohio State has issues, particularly between the sticks, but I think John Bluem will be pleased with the heart and desire his team showed after going 2-0 down. The Buckeyes need a win on Wednesday against Butler, and for confidence reasons alone, they need Hegngi to get off the mark this season. They face Michigan in Ann Arbor next Sunday (live on BTN), and it really is a must-win for both sides.

Northwestern has to be the most predictable team in the Big Ten. The Cats are reigning regular season and Tournament champions for a reason: they?re extremely organized, smart and efficient.

Tim Lenahan?s troops registered their third consecutive 2-0 win, with both goals coming from set plays. And what?s most impressive is those set plays clearly came from the training pitch.

Northwestern travels to East Lansing this weekend to take on the Spartans, and it?s hard to look past a Cats win. Damon Rensing?s team will be pumped up for their conference opener, but I think Northwestern has the tools to frustrate the Spartans and come away with a single goal win.

My upset alert this weekend is in Happy Valley. Indiana gives up too many chances for my liking, and I think Penn State will take advantage. On paper, the Hoosiers are a far superior team, but paper can be torn to shreds in seconds! Coach Warming?s team is playing for him, and when a team has that winning feeling, it?s a tough wave to break.

My third prediction sees a first Big Ten win for Chaka Dailey and Michigan. The Wolverines have had a tough preseason, and I think that will stand to them in conference play. Expect a close, physical game, but Michigan to sneak it by a single goal.

It?s early days yet and any team can win the regular season title, but a second slip-up in week two would most certainly end any chance of league success. Northwestern and Indiana look like the pacemakers right now, but Penn State is flying high and it?ll take a really good team to beat it.

I?m looking forward to the second chapter of Big Ten play this weekend. Join Dan Kelly and I for the Ohio State-Michigan at 6 p.m. ET Sunday on BTN.