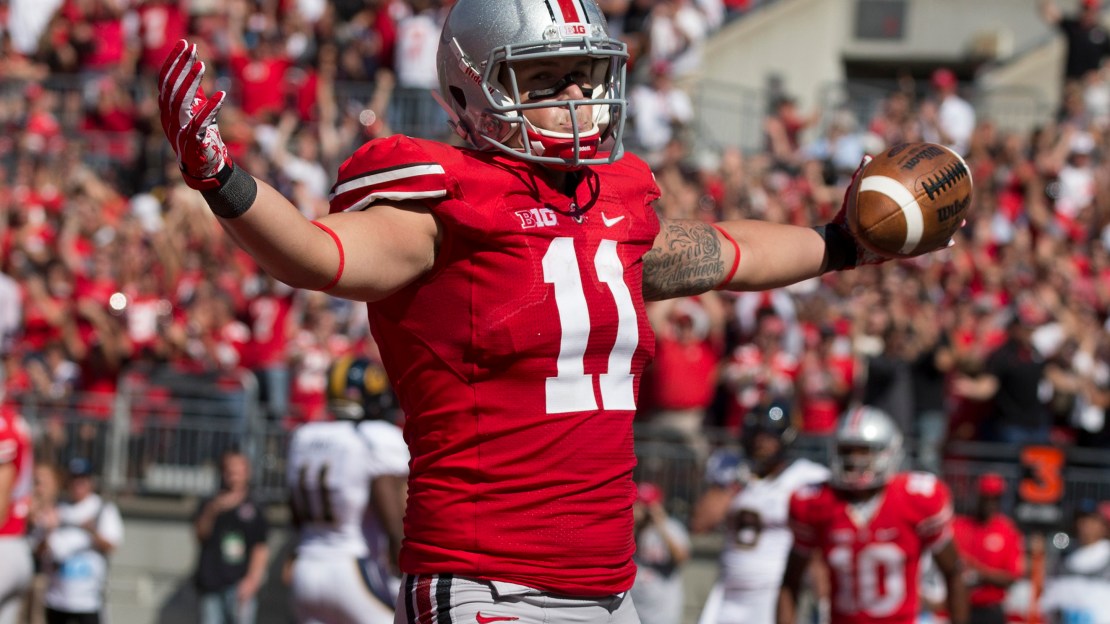 Following Michigan State's 20-3 home loss to Notre Dame, there's a new team on top of my Week 4 Power Rankings. Who is it? Here's a hint: It's the only remaining undefeated team from the Leaders Division. Check out my Big Ten Power Rankings in this post.

1. Ohio State. After cruising the first two weeks over Miami (Ohio) and UCF, the Buckeyes had their backs pushed against the wall vs. Cal in a 35-28 win that required some late-game heroics. And maybe that?s exactly what this team needed to take the next step in its development. Could the Buckeyes run the table?
Last week: 2
Up next: UAB

2. Michigan State. The Spartans have issues on offense, as the passing game has no air in it. Even more disconcerting was spotty play by the offensive line in a 20-3 shutdown home loss to Notre Dame in a game that the defense played good enough to win. Last sobering factoid: MSU?s only points came on a 50-yard field goal.
Last week: 1
Up next: Eastern Michigan

3. Michigan. A 63-13 win over FBS newbie UMass doesn?t prove much, but it keeps the Wolverines momentum moving forward after that narrow home victory over Air Force the week before. Do the Wolverines have a championship-caliber defense? Stay tuned.
Last week: 3
Up next: at Notre Dame

4. Northwestern. The Wildcats are 3-0 for the third time in the last five seasons. And the defense has played very well the last two weeks after being a liability last year and in the opener. A 22-13 win over Boston College is the latest brick in the wall. How good is this team? Is it 1995-96 good? Hmmmm.
Last week: 4
Up next: South Dakota

5. Nebraska. Does a 42-13 win over a Sun Belt team prove the Cornhusker defense is fixed after that 653-yard debacle at UCLA? No, but it?s a start, and it shows that the coaches know how to make schematic and personnel adjustments. I just want Bo back on the sideline after that health scare.
Last week: 5
Up next: Idaho State

6. Purdue. The Boilermakers did what they were supposed to do against an overmatched Eastern Michigan team-they squashed it 54-16. And in the process, Purdue showed resiliency bouncing back from a tough loss at Notre Dame. This easily appears to be Danny Hope?s best squad. Leaders Division sleeper, anyone?
Last week: 6
Up next: Off (Marshall on Sept. 29)

7. Minnesota. The Golden Gophers are 3-0, equaling their win total of last season after a 28-23 triumph over Western Michigan. The only bummer: QB MarQueis Gray got hurt. But Max Shortell looked good in relief. And the defense continues to impress. Yes, I really did type that. Is it time to start dreaming big, Goldy?
Last week: 7
Up next: Syracuse

8. Wisconsin. When does a win feel like a loss? When you need your foe from a lesser league to miss a very makeable last-second field-goal attempt to hang on for a 16-14 victory. But-who knows?-maybe this will spark a moribund Badger offense. Maybe not.
Last week: 10
Up next: UTEP

9. Illinois. The Fighting Illini got a nice bounce-back 44-0 win vs. a Charleston Southern team that was in over its head-and it showed. Doesn?t matter. This is just what the Fighting Illini needed after that dreadful 45-14 loss at Arizona State last week. Yes, Reilly O?Toole looked good. But let?s get QB Nathan Scheelhaase back.
Last week: 9
Up next: Louisiana Tech

10. Iowa. The offense found some life-but it was vs. FCS Northern Iowa. But, who cares? The Hawkeyes entered the game with one touchdown-and notched three on Saturday in what seemed like a cornucopia of scoring for a point-starved attack in a 27-16 victory. Iowa still is looking for a passing touchdown. But, hey, let?s take this one step at a time.
Last week: 8
Up next: Central Michigan

11. Penn State. The Nittany Lions came this close to winning their first two games vs. Ohio and Virginia, so it was nice to see the hard work and effort pay off in a resounding 34-7 victory over Navy. It seemed like old times-at least for one Saturday. On a side note: How about that Allen Robinson? Don't think anyone had him projected to be the Big Ten's top receiver.
Last week: 12
Up next: Temple

[#BTN Live: Listen to all of our show's episodes]

12. Indiana. I dare you to find a more gut-wrenching loss than the one the Hoosiers suffered on Saturday night vs. Ball State. The offense is clicking along. But leaks persist on defense. Sound familiar?
Last week: 11
Up next: off (at Northwestern on Sept. 29)