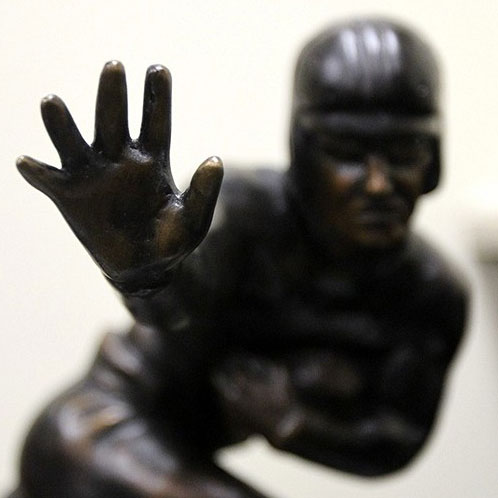 The Heisman race still has a long way to go, but contenders already are jockeying for position. I have had a Heisman vote for over 10 years, and I am keeping my eye on players like USC quarterback Matt Barkley, West Virginia quarterback Geno Smith and Oregon running back De?Anthony Thomas, among others.

The Big Ten also has some players in contention. But, surprisingly, I think Wisconsin?s Montee Ball already is out of the running before the first leaf has fallen off a tree. Through two games, the senior has rushed 47 times for 181 yards (3.85 yard per carry) with one touchdown. Last week was particularly tough, as Ball ran 15 times for 61 yards. And he saw his streak of consecutive games with a touchdown end at 21. It will take a lot for Ball to get back into contention. Michigan quarterback Denard Robinson is still a factor after rebounding with a huge effort in the win over Air Force, rushing and passing for over 200 yards.

Here are my top three Big Ten players in contention for the Heisman as of this week. Remember: It?s still early.

1. Braxton Miller, QB, Ohio State. The sophomore has been nothing short of sensational. He paces the Big Ten in rushing with 44 carries for 302 yards (6.9 ypc) and four touchdowns. His 151-rushing yards per game average ranks fourth in the nation. Miller also has hit 66.8 percent of his passes (32-of-48) for 362 yards with three touchdowns and one pick. In a season-opening win over Miami (Ohio), Miller set a school single-game quarterback record with 161 yards rushing. Last week, he tied a school single-game quarterback record with three rushing touchdowns. This week: Cal.

2. Le?Veon Bell, RB, Michigan State. He already has had a Heisman-type performance, running 44 times for 210 yards and two touchdowns in 17-13 season-opening win over Boise State. The junior is a workhorse who ranks second in the Big Ten in rushing (tops among running backs) with 62 carries for 280 yards and four scores. Bell can improve his Heisman stock with a big prime-time effort vs. Notre Dame, which has its best defense of the Brian Kelly era. This week: Notre Dame.

3. Taylor Martinez, QB, Nebraska. He opened with a bang by hitting 26-of-34 passes for 354 yards and five touchdowns in 49-20 win over Southern Miss. But he had some struggles at UCLA, hitting 17-of-31 passes for 179 yards with no touchdowns and a pick. Martinez did run 13 times for 112 yards and a score. The junior is second in the Big Ten in passing efficiency and leads the Big Ten with 533 yards passing and five touchdown tosses. Up next: Arkansas State.

[Did You See This?: Watch and share the latest amazing video clips from around the Big Ten.]

Now, the candidate with the biggest chance to impress is Bell, who will have much of the nation?s attention by playing Notre Dame in a battle of ranked teams. The Fighting Irish defense ranks 37th in the nation overall (314.5 ypg) and 50th vs. the run (119.5) with wins over Navy and Purdue.

Miller also could earn some plaudits by looking good in a win over Cal. Ohio State has yet to beat a team from a BCS league, knocking off Miami (Ohio) of the MAC and UCF of C-USA.

Martinez will be expected to dominate Arkansas State of the Sun Belt. Just winning won?t be enough. He needs to post big numbers coming off that disappointing UCLA loss.