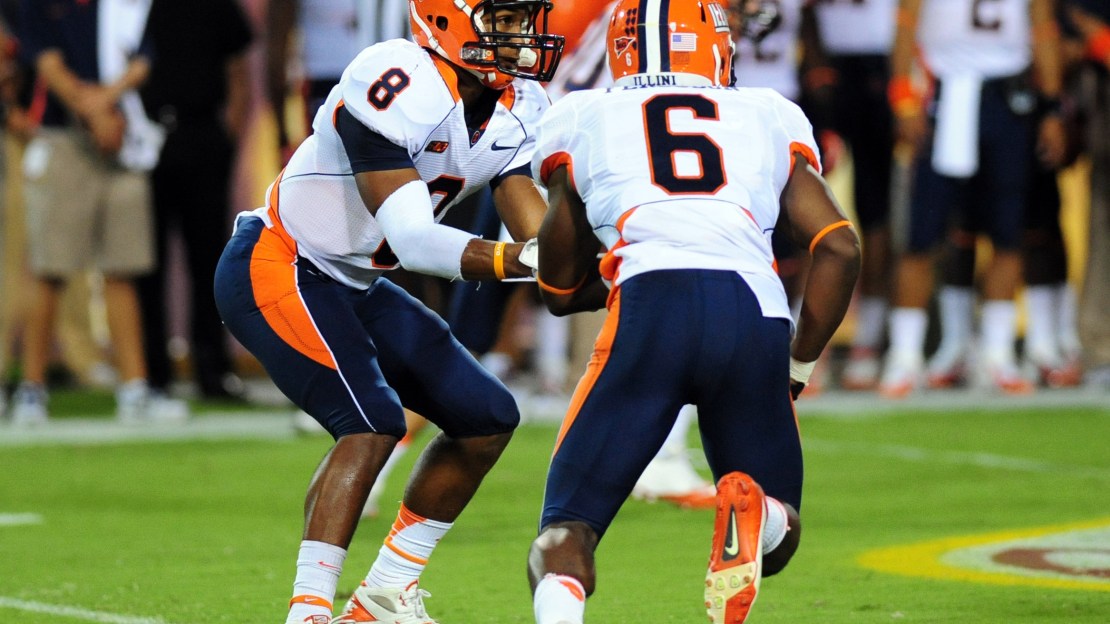 Taylor Kelly completed 18 of 24 passes for 249 yards and a touchdown, and Arizona State rolled past Illinois 45-14 on Saturday night to improve to 2-0 under new coach Todd Graham. Kelly's backup, Michael Eubank, was 5 of 5 passing for 69 yards and two touchdowns and ran 7 yards for a score.

Chris Coyle matched a school record for tight ends with 10 catches, totaling 131 yards and two scores. He caught six passes for 73 yards all of last season.

Illinois (1-1) was without quarterback Nathan Scheelhaase because of an ankle injury, but the Illini's biggest problem was on defense, especially against the pass.

Illinois joined Nebraska (to UCLA) and Wisconsin (to Oregon State) as Big Ten teams to lose at Pac-12 schools on Saturday.

FINAL: Nobody expected Chris Coyle to play a big role for Arizona State against Illinois on Saturday, but Coyle came through in a big way in the 45-14 victory at Sun Devil Stadium. Coyle caught 10 passes for 136 yards and two touchdowns.

The Sun Devils' passing game looked flawless, despite the efforts of the Fighting Illini's secondary. Arizona State's air attack couldn't be contained, as it torched Illinois for 318 yards and three touchdowns.

The Sun Devils' offense dominated, ripping off huge chunks of yardage. Arizona State burned the Fighting Illini's defense for six plays of more than 20 yards. The Sun Devils added to the highlight reel when Taylor Kelly found Jamal Miles open for a 41-yard pass with 7:33 left in the second quarter. The big gainer was part of a six-play drive capped off when Kelly found Coyle open for a three-yard touchdown pass. That gave Arizona State a 28-7 lead.

Kelly threw for 252 yards while going 19-24 for the Sun Devils. He threw two touchdowns and no interceptions. Kelly also ran for 25 yards on five attempts. Carlos Mendoza showed good hands on defense for Arizona State, picking off two Illinois passes. He intercepted Miles Osei on third-and-6 during a key drive in the second quarter.

Reilly O'Toole threw for 53 yards while completing 10 of 14 passes for Illinois. O'Toole tossed one touchdown and one interception. The Fighting Illini's offense finished the game having gained 332 yards, including 99 passing yards on 14 completions. Illinois' running game proved effective, netting 233 yards on 50 rushes.