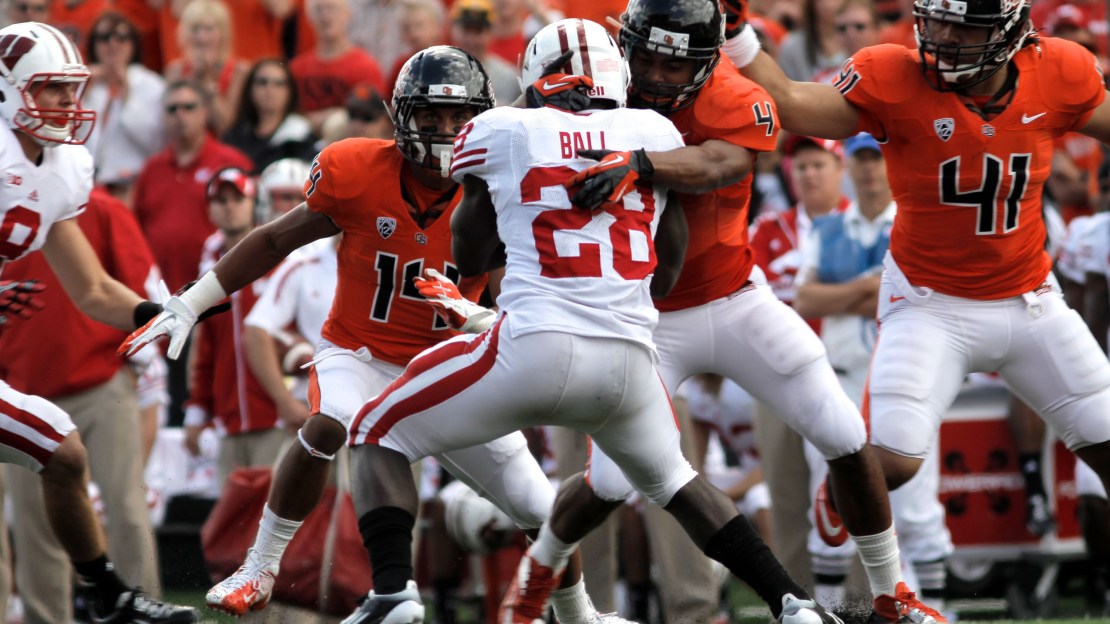 It's Sunday, and that means it's time for my weekly Big Ten Power Rankings. Where does your Big Ten team fall on my list following Week 2 action? See in this post. Disagree with my rankings? Leave your thoughts in the comment box at the bottom of the post or tweet me @BTNTomDienhart.

Read all my Big Ten coverage here, and don't forget to send me any questions you may have for my weekly Big Ten Mailbag.

1. Michigan State. The offense began to come around this week vs. Central Michigan, as QB Andrew Maxwell took a big step forward. The defense? It?s the best in the Big Ten, still not yielding an offensive touchdown.
Last week: 1
Up next: Notre Dame

2. Ohio State. No one is surprised that the Buckeyes are 2-0. But the extraordinary play of QB Braxton Miller has been stunning. No one in the league is playing better. I can?t wait until Sept. 29, when the Buckeyes play at Michigan State.
Last week: 2
Up next: Cal

3. Michigan. It wasn?t pretty, but the Wolverines moved to 1-1 with a methodical 31-25 win over Air Force. The most vital revelation: Denard Robinson regained his big-play form en route to notching 208 yards passing and 218 yards rushing. Oh, and RB Fitz Toussaint is back from suspension, but he only ran eight times for seven yards. Now, it?s time to get into a groove.
Last week: 4
Up next: UMass

4. Northwestern. The Wildcats did their part to hold up Big Ten pride on a day when the league went 6-6, knocking off SEC foe Vanderbilt. The play of a maligned defense provides hope that Northwestern could be a real factor in the Legends Division.
Last week: 7
Up next: Boston College

5. Nebraska. After that promising opening 49-20 win over Southern Miss, the Cornhuskers struggled mightily in a 36-30 loss at UCLA. The defense allowed a whopping 653 yards in the loss. This, ladies and gentlemen, is what they call a ?major concern.?
Last week: 5
Up next: Arkansas State

6. Purdue. The Boilermakers have shown they have a championship-caliber defense and the best defensive tackle tandem in the Big Ten. The offense? A confounding two-quarterback system and lack of playmakers are hampering the attack.
Last week: 9
Up next: Eastern Michigan

7. Minnesota. The 2-0 Golden Gophers-yes, 2-0 Golden Gophers–continue to show they are much-improved over last season, with MarQueis Gray coming off a four-touchdown effort in a win over FCS New Hampshire. Can the defense keep playing well?
Last week: 10
Up next: Western Michigan

8. Iowa. Which way is up for the Hawkeye offense? The attack is struggling, boasting one touchdown in two games after an ugly 9-6 home loss to Iowa State. QB James Vandenberg had 25 TD tosses in 2011; he has none this year. The lack of big-play wideout is glaring. And the line is struggling.
Last week: 6
Up next: Northern Iowa

9. Illinois. Was there anything positive from that 45-14 beat down at Arizona State? Uh, no. The good news: It counts as just one loss. The Fighting Illini need to move on. All of their Big Ten goals are still within reach. But, QB Nathan Scheelhaase needs to comeback-now–from injury.
Last week: 8
Up next: Charleston Southern

10. Wisconsin. It may be time to sound the alarm in Madison following an utterly dispiriting loss at Oregon State and unimpressive opening win over FCS Northern Iowa. The offense is MIA, as QB Danny O?Brien and RB Montee Ball are struggling behind a line that?s not vintage Wisconsin.
Last week: 3
Up next: Utah State

11. Indiana. The uncertain status of QB Tre Roberson following an injury on Saturday takes some of the glow off of the Hoosiers? 2-0 start, Indiana's eighth in the last nine years. So, let?s enjoy the moment, shall we?
Last week: 12
Up next: Ball State

12. Penn State. Considering the 0-2 Nittany Lions? circumstances, moral victories should count. And that one-point loss at Virginia certainly qualifies as a big moral victory. Penn State may lack depth and talent, but Bill O?Brien will have it fighting tooth and nail each week.
Last week: 11
Up next: Navy