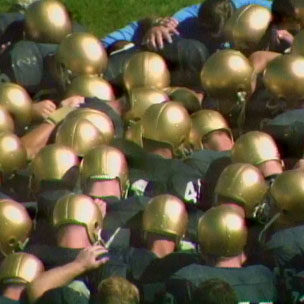 This weekend Purdue travels to Notre Dame to play the Fighting Irish for the 84th time. Notre Dame currently leads the series 55-26-2, but the Boilermakers won an absolute classic game in South Bend back in 1968. In what will be an occasional series of Big Ten Classics on BTN2Go, we've gone into the archives to recover the telecast of the entire 1968 game. The full game is posted on BTN2Go, but we've clipped a portion of it here for you to enjoy.

Purdue entered the season ranked No. 1 in the AP Poll. The game featured Purdue quarterback Mike Phipps and running back Leroy Keyes, among others – read all about their exploits in this tremendous archived Sports Illustrated game story written by the legendary sportswriter Dan Jenkins. Read more below in this post.

An excerpt form that SI piece by Jenkins:

"Purdue's offense is basic. Phipps stands in a pocket that wouldn't crumble if the National Guard went at it. His receivers just do a little hook or cross the middle and they are open and he hits them. Keyes runs a pitch either way. A bull of a fullback, (Perry) Williams, is in there to butt people down straight ahead. And Jim Kirkpatrick, the other halfback, will come off tackle now and then. That's all. About four or five plays, but brilliantly executed with the power, speed and confidence of, well, pros."

Phipps, you may know, became the first quarterback ever to beat Notre Dame three straight years. Read more about him and his induction into the College Football Hall of Fame over at Purduesports.com. Hammerandrails.com also has a great look back at this year in Purdue sports here. And check out this game program

[Did You See This?: Watch and share the latest amazing video clips from around the Big Ten.]

How far back is 1968? Consider this: This weekend, Purdue wears a helmet decal in honor of the late astronaut Neil Armstrong, a 1955 graduate of Purdue and the first man to walk on the moon. That moon landing happened July 20, 1969, nine months after this game was played.