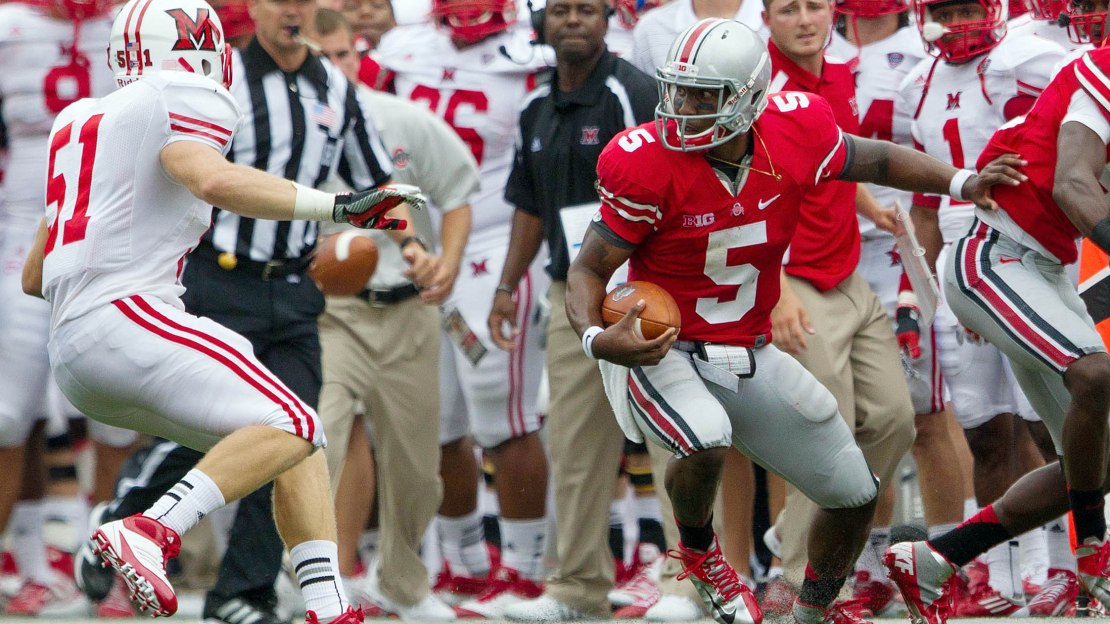 With Week 1 behind us, it's time for my latest Big Ten Player Rankings. Again, I'm doing these a little different this year. Whereas I used to rank the top 10 players – a practice that was tough due to all the talent on both sides of the ball – I'll rank the top six offensive and defensive players each week.

4. Rex Burkhead, RB, Nebraska – The knee injury that knocked Burkhead out in the first quarter Saturday is a concern, but the fan favorite did run for 68 yards and a touchdown on three carries before heading to the sideline.
Week 1 stats: 3 car., 68 yards, 1 TD
Previous ranking: No. 4

5. Denard Robinson, QB, Michigan – Few, if any, quarterbacks are going to have success against Nick Saban's Alabama defense. Robinson sure didn't, and that's a concern based on his unimpressive track record against top defenses.
Week 1 stats: 11-26, 200 yards, 1 TD, 2 INT; 10 car., 27 yards
Previous ranking: No. 2

6. Taylor Martinez, QB, Nebraska – As unbelievable as Martinez's career day was Saturday, it's too soon to say this is the new Martinez and that he's figured out all that ailed him as a passer. Keep it up a couple more weeks, and then it's legit.
Week 1 stats: 26-34, 354 yards, 5 TD, 0 INT; 6 car., 10 yards
Previous ranking: NR

DEFENSE
1. Kawann Short, DT, Purdue – Short blows up lines, plain and simple. And that includes when the opposing kicker is on the field, evidenced by him notching his fifth and sixth career blocked kicks Saturday.
Week 1 stats: 1 sack, BLK FG, BLK XP
Previous ranking: No. 1

2. William Gholston, DE, Michigan State – Like the entire Michigan State defense, Gholston had an incredible first series Friday night. While he slowed down after that, he helped play a role in keeping Boise State's offense out of the end zone.
Week 1 stats: 1 BrUp, 1 QH
Previous ranking: No. 2

3. Chris Borland, LB, Wisconsin – Every week, it seems, Borland produces. Week 1 was no different, as the linebacker registered seven tackles, second only to Mike Taylor, a sack and a forced fumble.
Week 1 stats: 7 tackles, 1 sack, 1 FF
Previous ranking: No. 3

5. Michael Buchanan, DE, Illinois – All the people who talked about Buchanan being the next Whitney Mercilus sure looked smart Saturday. The defensive end blew up the backfield, as expected, and even picked off a pass.
Week 1 stats: 2 TFL, 1 sack, 1 INT
Previous ranking: No. 6