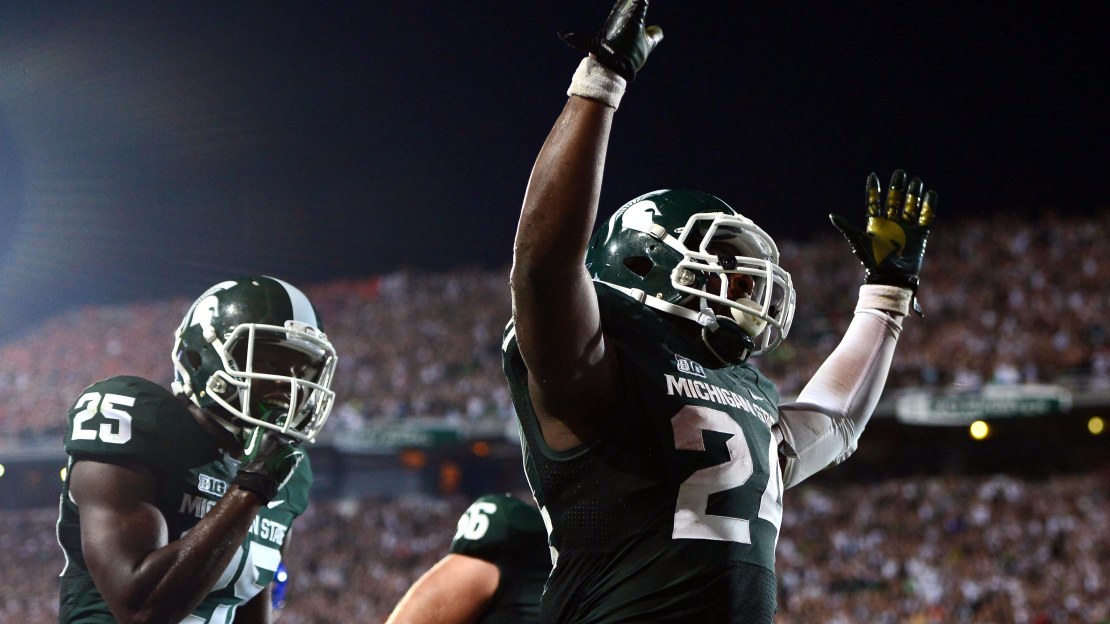 It's Sunday, and that means it's time for my weekly Big Ten Power Rankings. Where does your Big Ten team fall on my list following Week 1 action? See in this post. Disagree with my rankings? Leave your thoughts in the comment box at the bottom of the post or tweet me @BTNTomDienhart. Read all my Big Ten coverage here, and don't forget to send me any questions you may have for my weekly Big Ten Mailbag.

1. Michigan State. No, the 17-13 victory over Boise State wasn?t pretty. But the Spartans found a way pull out a workmanlike victory over a quality foe. The defense looks to be as good as I thought, and Le?Veon Bell may be the top running back in the Big Ten. But if this team is going to be as good as I think it can be, the passing game needs to develop. And, I think it will behind Andrew Maxwell now that he has a game under his belt.
Up next: at Central Michigan

2. Ohio State. After a slow start, the Buckeyes got rolling in a 56-10 triumph over Miami (Ohio). QB Braxton Miller remains a dynamic runner, setting a single-game rushing mark for a Buckeye quarterback with 161 yards. But his passing still has something to prove. However, it looks like this receiving corps has potential with guys like Philly Brown and Devin Smith. And the defense? Simply dominating.
Up next: Central Florida

3. Wisconsin. It wasn?t pretty, but the Badgers held on to knock off FCS Northern Iowa, 26-21. Better days surely are ahead for what has been the top program in the Big Ten the past two seasons. The offense has to get back to its 40-point-per-game performances of recent vintage. A problem: This team doesn?t figure to be challenged in the non-conference. Will it stay interested?
Up next: at Oregon State

4. Michigan. The 41-14 loss to Alabama was demoralizing. The Wolverines were overmatched the moment they came out of the tunnel vs. a Crimson Tide team that was deeper and more talented. Still, Michigan can use this is a building tool, knowing all of its goals are still within reach for a program that is on the rise. Better days are ahead.
Next: vs. Air Force

5. Nebraska. The Huskers tested themselves by playing a tough Southern Miss team and claiming a 49-20 victory. And, Nebraska responded. The defense showed flashes, but more big plays (sacks and tackles for loss) are needed. The offense looked strong, especially the passing of QB Taylor Martinez. RB Rex Burkhead is expected back healthy after leaving the game with injury. Great news.
Up next: at UCLA

6. Iowa. The Hawkeyes had to go down to the wire to dump a rugged Northern Illinois squad, 18-17, in Chicago?s Soldier Field. The offense didn?t score a touchdown until late in the fourth quarter; and it proved to be the game-winner. To rise up this list, Iowa must improve on offense; I?m looking at you, offensive line. At least it looks like the Hawkeyes have found a running back in Damon Bullock.
Up next: Iowa State

7. Northwestern. The Wildcats squandered a 35-13 third-quarter lead, falling behind Syracuse, 41-35, with under three minutes to play. But that?s when backup QB Trevor Siemian came in to save the day, engineering a game-winning touchdown drive after Kain Colter was banged up. RB Venric Mark looks like a star, becoming the first Wildcat to run back a punt for a score since 2005 in the 42-41 win. But the defense? It may have issues-again.
Up next: Vanderbilt

8. Illinois. By all accounts, it was a successful debut for Tim Beckman. The Fighting Illini beat Western Michigan, showing a strong brand of defense that figures to be the backbone of this year?s team and even scored an insurance touchdown late in the 24-7 triumph. The offense? Work needs to be done, especially along the line. The attack had little consistency and bogged down after QB Nathan Scheelhaase was banged up and left the game in the second half.
Up next: at Arizona State

9. Purdue. The Boilermakers turned in a dominating effort over FCS Eastern Kentucky with a 48-6 victory. The defense at time looks suffocating. That wasn?t a shock. But the performance of the offense was a surprise, especially QB Robert Marve. He hit 31-of-38 passes for 307 yards and three touchdowns starting for suspended Caleb TerBush.
Up next: at Notre Dame

10. Minnesota. A nice, gutsy opening win at UNLV, with the team showing moxie in toughing out a triple-overtime 30-27 victory. Yes, much work remains, but I love the direction of this program. And, don?t look now, but there?s a chance the Golden Gophers could be 4-0 when they head to Iowa for the Big Ten opener on Sept. 29. And this is a Hawkeye program Minnesota has beaten two years in a row.
Up next: New Hampshire

11. Penn State. The opener couldn?t have gone much worse in a 24-14 loss to Ohio. Things started well, with the Nittany Lions taking a 14-3 halftime lead. But the offense bogged down in the second half. And that put the defense on the field too long and too often, which played a big part in the unit?s inability to make key stops and get off the field. QB Matt McGloin had 178 yards passing in the first half. But the second half wasn?t as fruitful, as the offense totaled just 115 yards in the final 30 minutes. How will the team respond? And, how bad could this season get?
Up next: at Virginia

12. Indiana. The program already has matched last year?s win total. The Hoosier defense had to make a late stand to turn back a pesky Indiana State squad to notch a 24-17 win. That?s a nice sign. And QB Tre Roberson had his moments running the new offense, hitting 26-of-36 passes for 281 yards with a touchdown. But, more points are needed for Indiana to be as good as it want to be.
Up next: at UMass