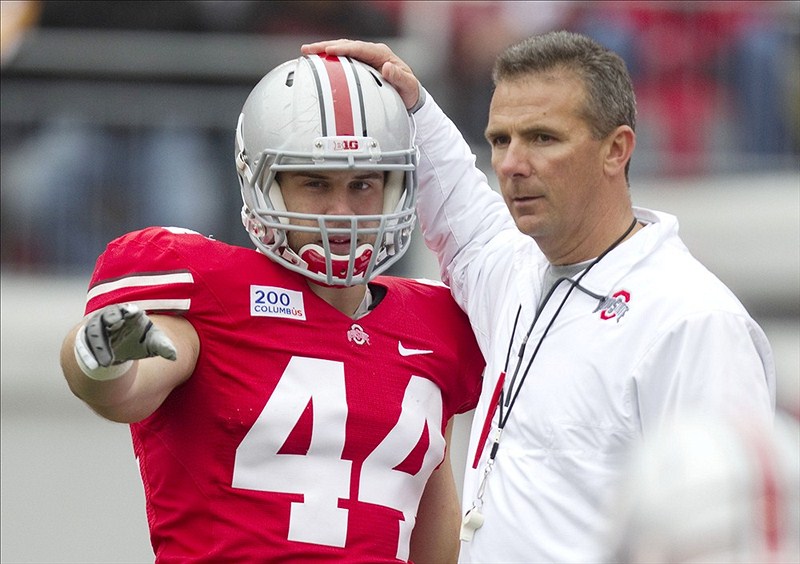 We've done it all spring and summer, but now that the first week of football is here, it gets even better. Every morning Monday through Friday BTN.com offers up a quick take on the headlines from around the Big Ten. You can find my Big Ten Daily Links them here in case you miss them, or get them via RSS over here.

Today: Is Urban Meyer more mellow? Will Fitz Toussaint play against Alabama? What's ahead for Penn State? How will the new faces at Iowa fare? Can Purdue take it to the next level? Plus, my take on the tweets that really matter. Read it all in the post below.

New deal: New Ohio State coach Urban Meyer claims to be a reformed man. Balance wasn?t a part of his life during his stint as Florida coach. He says it is now.

Time will tell. It?s easy to say all of the right things now. But, how will Meyer respond when the season gets cranked up? How will he deal with adversity when it hits? Oh, you can beat on it hitting. Will he bury himself into his job? We all hope not.

Will he or won't he? The world wonders and waits: Will Fitz Toussaint start at tailback for Michigan vs. Alabama on Saturday? Whatever happens, Wolverine offensive coordinator Al Borges? game plan will be different if Toussaint is in the mix-or if the offense has to use backup Thomas Rawls.

Toussaint and Rawls are different types of back, with Toussaint being a speedy, quick runners and Rawls more of a power back. Maybe the powerful Rawls will be a better choice vs. a speedy but not huge Bama defense. Maybe not.

Heads up: The season is finally here. What will Penn State look like? The Altoona Mirror offers the 10 biggest things to look for this season.

The biggest thing may be to win now, which would stabilize the program. It also may be enough to prevent players from transferring. Players can leave for another school at any time and still be eligible at their new school all the way up until August 2013. There are so many unknowns at Penn State. I honestly don?t know what to expect.

Maturity matters: A senior and father, Minnesota quarterback MarQueis Gray is all grown and presumably ready for a big senior season.

Gray looked good when I watched him in camp earlier this month. He is a mammoth man who looks poised and confident under center now that he is focused on playing quarterback after being a receiver earlier in his career. And I think he no doubt will benefit from playing in the same scheme for two seasons in a row.

New Iowa faces: Stability was a hallmark of Iowa under Kirk Ferentz since he took over as coach in 1999. But that all got turned upside down after 2011, when the staff was shaken up. Radically.

The program is just 15-11 overall (8-8 in the Big Ten) the past two seasons. I think the changes could help spark the program back on an upward ascent for a coach who has won two league titles. The biggest change is new offensive coordinator Greg Davis, who will juice up the passing game and bring a bit more sophistication to an offense that was growing stale.

Under the radar: Is there a more underrated player in the Big Ten than Wisconsin linebacker Mike Taylor? Of course not.

Taylor paced Wisconsin with 150 tackles last season-third-most in the nation-but you never would have known it. A big part of his success is competing with fellow linebacker Chris Borland. The two feed off each other, which is why they are one of the Big Ten?s top linebacking tandems.

This is a program that hasn?t won a conference title since 1999, when it was in the Big 12. The great Tom Shatel of the Omaha World-Herald thinks 2012 will be a banner year for the Huskers. How banner? He forecasts a 10-2 record with a Fiesta Bowl appearance.

Hmmmm. That may be a bit ambitious. Still, the Huskers may be a dark horse of sorts in the rugged Legends Divisions, which is paced by Michigan and Michigan State.

Under center: I don?t know about you, but I?m ready to see what new Michigan State quarterback Andrew Maxwell is all about.

The kid has looked good in camp. And he can make all of the throws. Plus, Maxwell isn?t a greenhorn, as he will be a fourth-year junior this season. Bottom line: I think Maxwell is gonna be good. Really good.

Next level: Could this be the year that Purdue gets over the proverbial hump under Danny Hope, who is in Year Four?

Perhaps. There is a lot to like about the defense, including a strong line and terrific set of cornerbacks. But the offense? That will be the key for the Boilermakers this fall. The passing game has to get better.

Brown's town: The great Loren Tate of the Champaign News-Gazette thinks Fighting Illini linebacker Jonathan Brown is one of a kind.

Just like running back Mikel Leshoure and end Whitney Mercilus seemingly came out of nowhere to star in recent years, Brown could be on a similar path. I agree, as Brown is coming off a breakout season. Speaking of Illinois, here is a fun look at how Illinois coaches did in their first season of action.

Did Tim Beckman read this?

Its not difficult to make the case for the Huskers winning 10 games. The problem is the case is easier for 3 or 4 losses.

My take: That is the conundrum with Nebraska. There is a lot to like, especially on a defense that teems with speed and talent across the front line. But questions loom, particularly on the offensive side of the ball. This will be an interesting season in Lincoln.

Boise coach Chris Petersen on MSU: "This will be one of the hardest openers we've had since I've been here, for sure."

My take:This is saying a lot, considering Boise State has opened vs. the likes of Georgia, Virginia Tech and Oregon in recent years-and beat them all. You?ve been warned, Michigan State.

Seems like Urban Meyer is on ESPN more now as the head coach for Ohio State than he was as an ESPN announcer.

My take: Hmmm. I was thinking the same thing.

My take: Right guard also is still being contested as the Boilermakers head toward the opener. In fact, keep an eye on the o-line. It is a HUGE key for an offense that has lots to prove.