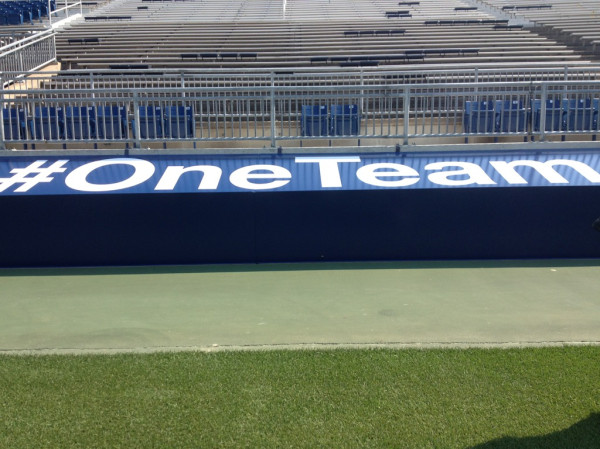 The changes keep coming at Penn State. The latest example is a new sign on the team's sideline, with the Twitter hash tag #OneTeam. Penn State opens the season Sept. 1 vs. Ohio, and this sign is hardly the only thing that will be different from last season. Earlier this week, Penn State also announced it will have new uniforms for the 2012 season. @KevinOnCFB tweeted a picture of the new sign Thursday morning, and you can see it and other Penn State media day coverage in this post.

With all the changes, it comes as no surprise University Park is a busy place today. The media is all over the place, as you can see in this tweet:

20 minutes before Bill O?Brian talks and this place is packed! http://t.co/8tTfNBO7

Because it's media day, we may get our first look at what the jerseys look like with the blue ribbon and names on the back. The players don't have their names on the jerseys they're wearing Thursday, per this tweet below:

No names on the Jersey yet. http://t.co/XrQqq8ck

But the jerseys do have the "B1G" patch:

Names not on jerseys just yet, but B1G logos are. #PSU