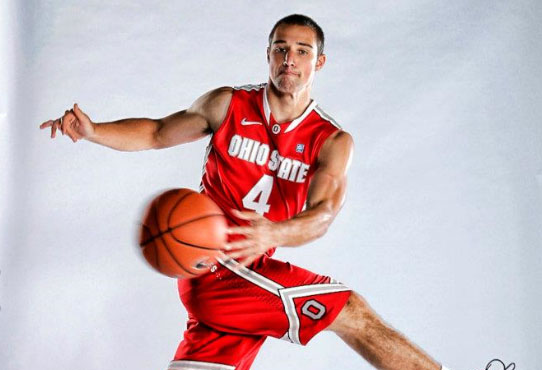 Jared Sullinger and William Buford are gone, but Thad Matta still has plenty of talent coming back for the 2012-13 season. In Aaron Craft and Deshaun Thomas, Ohio State figures to boast one of the Big Ten's elite duos. Throw in role player Lenzelle Smith and youngsters LaQuinton Ross and Sam Thompson, and the Buckeyes should be just fine. Athlon Sports believes in the Buckeyes, and that's why the publication was in Columbus recently for a photo shoot. See a picture in this post.

And it looks like Craft and Thomas won't just be featured in the magazine – they'll be cover boys, according to this tweet from the photographer:

It's easy to see why expectations are high again in Columbus, where the Buckeyes have won at least a share of the last three Big Ten crowns and are fresh off their second Final Four appearance in the last six seasons. ESPN's Andy Katz predicts the Buckeyes to remain a force, placing them No. 5 in his way-too-early top 25, and I'm thinking Thomas will have such a strong year that he'll be the Big Ten's No. 2 prospect in the 2013 NBA Draft.