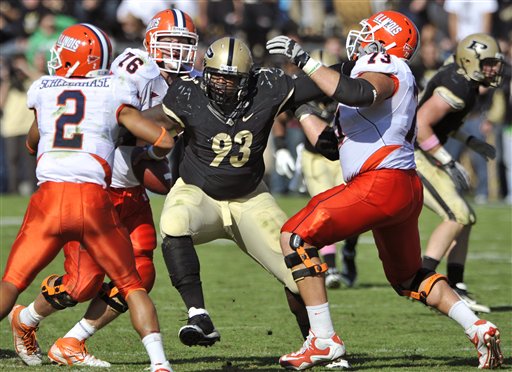 Big Ten media days kick off Thursday in Chicago, so I thought I'd release my preseason Big Ten player rankings. I'm going to do these a little different this year. In previous years, I'd rank the top 10 players, which often became a tough task with all the talent on both sides of the ball. To account for both sides, I'll rank the top six offensive and defensive players each week.

Why six? Well, because there are six teams in each division. So, consider offense the Legends Division and the defense the Leaders Division, or vice-versa.

OFFENSE
1. Montee Ball, RB, Wisconsin – The Heisman Trophy finalist must be a unanimous pick atop any and all Big Ten player rankings after his record-breaking season last year.
2. Denard Robinson, QB, Michigan – Year 1 under Al Borges was pretty solid (3,349 total yards, 20 pass TDs, 16 rush TDs), so Year 2 should only be better. Right?
3. Le'Veon Bell, RB, Michigan State – Take away Edwin Baker and factor in Michigan State is breaking in a new QB, and the opportunities are there for a big-time breakout.
4. Rex Burkhead, RB, Nebraska – If Taylor Martinez's footwork has improved, Burkhead is poised to have a very strong year — even if he garners fewer touches.
5. James Vandenberg, QB, Iowa – Supremely underrated entering his senior season, the Big Ten's top pro-style QB will be flinging the ball all over the field.
6. Ricky Wagner, OL, Wisconsin – Wagner plays the most important position on Wisconsin's perennially stout offensive line that figures to pave the way for another prolific offense. (Update: Penn State's Silas Redd was No. 5 in the first edition of this post, but his transfer to USC made way for a new player.)
Next in line: Braxton Miller, QB, Ohio State

DEFENSE
1. Kawann Short, DT, Purdue – The Boiler was right up there with Devon Still and Jerel Worthy a year ago, and now he's a year older and year more experienced.
2. William Gholston, DE, Michigan State – An absolute freak of an athlete, Gholston is capable of being the nation's most dominant/feared pass-rusher.
3. Chris Borland, LB, Wisconsin – Injuries can't stop the Big Ten's elite tackling machine who always seems to be a little underrated.
4. Denicos Allen, LB, Michigan State – Bet you didn't know Allen tallied 83 tackles, 18 of which came via the TFL variety, and 11 sacks last season.
5. John Simon, DE, Ohio State – A terrific talent on a defense loaded with starpower, Simon has the weapons around him to lead the Big Ten in sacks.
6. Michael Buchanan, DE, Illinois – Not saying he'll make a Whitney Mercilus-like leap, but he has the tools and enters the season as a bigger name than Mercilus did.
Next in line: Johnathan Hankins, Ohio State