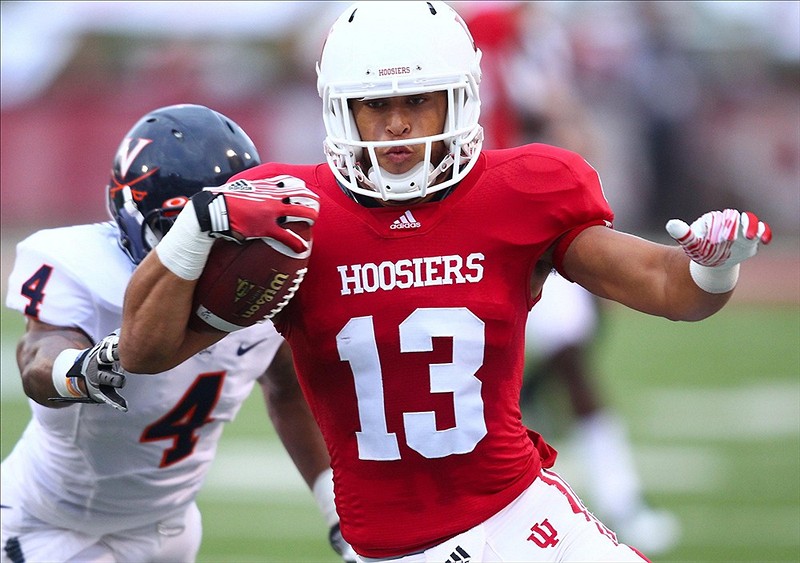 In my ongoing summertime look at our 12 Big Ten football teams (see my football schedule analysis here, my latest one-on-one interviews here, and all sorts of fun rankings here), I am presenting my ways to to fuel enthusiasm about football on each campus.  I served up 10 reasons why Illini fans should be excited about football in 2012 on Monday. Now it's time to get Hoosiers fans fired up.

Yes, Indiana has been to just one bowl since 1993 and is coming off a 1-11 season (0-8 Big Ten), but second-year coach Kevin Wilson remains undaunted as he tries to reverse the fortunes of the Hoosier program. With that, I offer my 10 reasons for Indiana fans to be excited about 2012.

1. Players know what to expect. Just talk to Kevin Wilson. He?ll tell you. Upon arrival in 2011, not everyone was ?buying in? to what Wilson was selling. The result: player defections. But the ones who stayed are committed to the program and believe in what Wilson is preaching. The players know the coaches; the coaches know the players. This is becoming a cohesive unit that?s on the same page as it moves forward.

2. Defensive line. The makings of any good defense begin up front. That?s a good sign for Indiana, which has a veteran front led by three senior starters in Larry Black, Adam Replogle and Nicholas Sliger. If the front can do a better job of controlling the line, keeping blockers off the linebackers and making a few plays, it will go a long way in helping improve a defense that ranked last in the Big Ten in total defense in 2011 (458.7 ypg).

3. Tre Roberson. He flashed potential last season, when he became the first true freshman ever to start at quarterback for the Hoosiers. But he needs to improve after tossing six picks and just three touchdown passes. Coach Kevin Wilson wants his signal-caller to complete 67 percent of his passes; Roberson hit just 57 percent. The arrival of Cameron Coffman from a junior college will make quarterback a competitive position. Whoever is under center must look often for Kofi Hughes, who paced the squad with 35 catches for 536 yards and three scores in 2011.

4. Junior-college defensive newcomers. The numbers don?t lie-the Hoosier defense needs help. In 2011, Indiana ranked last vs. the run (243.7 ypg); eighth vs. the pass (215.0 ypg); last in points allowed (37.3 ppg). And Indiana also generated just 16 turnovers, the second fewest in the Big Ten (Minnesota had only nine). To help stop the bleeding, Kevin Wilson hit the JC ranks and reeled in linebackers Jacarri Alexander and David Cooper; end Justin Riverside; safeties Tregg Waters and Ryan Thompson. Look for Alexander and Cooper to have the most profound immediate impact after flashing ability in spring drills. The duo will help inject some needed attitude and swagger into a sagging unit.

5. Improved maturity. The Hoosiers took their lumps during a 1-11 season by playing 32 true and redshirt freshmen. And 11 true freshmen and six redshirt freshmen started at least one game in 2011. Those players presumably have benefitted from that baptism by fire. At least that?s the hope for a team that was outscored by 195 points in Big Ten play.

6. Stephen Houston. He arrived from a junior college last season and provided instant punch to the rushing attack. The 6-0, 222-pound Houston is a physical runner who paced the team with 802 yards rushing and ran for over 100 yards three times while fumbling just once. The junior can be a workhorse for the offense while the passing game rounds into form.

7. Seth Littrell. He arrives from Arizona with an extensive knowledge of the passing game. And that?s why he?s in Bloomington as the new offensive coordinator, as Kevin Wilson wants to amp up the Hoosier aerial attack. Indiana?s passing game ranked fifth in the Big Ten in 2011 (199.4 ypg); it can be better. And Wilson wants it to be better, as he knows a big key to the Hoosiers winning more games will be to score more points. And passing better will be a means to that end after the Hoosiers ranked 10th in the Big Ten in scoring last season (21.4 ppg).

8. Secondary. If experience matters, the secondary could be good with three starters back. Keep an eye on the cornerback tandem of Greg Heban and Lawrence Barnett. And strong safety Mark Murphy also is back. Barnett is the best of the bunch. But remember: The Hoosiers allowed 14.3 yards per catch in 2011. Plus, IU yielded 26 touchdown passes with just five picks. The vets need to improve-like every other aspect of this defense.

9. Getting its kicks. Mitch Ewald is one of the Big Ten?s best kickers. So, if the Hoosiers are in any close games, they should have an edge. Ewald has connected on 82.9 percent of his career field-goal attempts, tops in school annals, and has range to almost 50 yards. The junior, who nailed 13-of-16 field-goal attempts last season, also has hit all 63 of his extra-point attempts. On a team with few sure few things, Ewald is a welcomed sight.

10. An anchor inside. That?s what center Will Matte is for a team that lost its last nine games of 2011 and failed to lead in the second half of any of those games. The senior has 32 career starts and will be a leader up front for a line that?s breaking in three new starters.