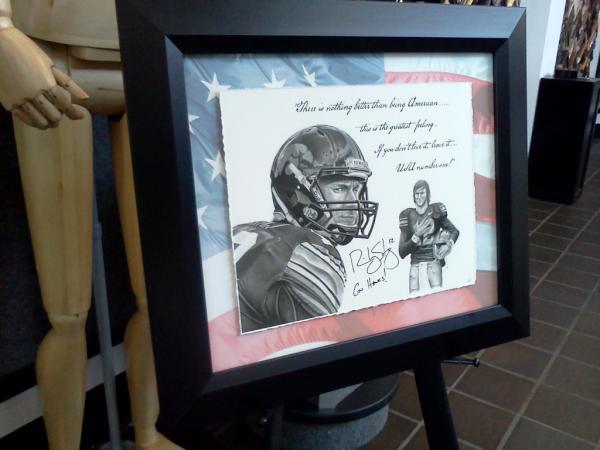 It's been a few years since Ricky Stanzi became a cult hero. If you don't remember the exact moment, it happened when the former Iowa QB gave Fox's Chris Meyers this quote following the 2010 Orange Bowl: "There is nothing better than being American. This is the greatest feeling. If you don't love it, leave it. USA, No. 1." The quote reads great, but it's even better when you hear it.

Anyway, no excuse is needed to reference this interview. There is one here, though, as Kirk Ferentz and his wife evidently came up with the winning bid for a framed, autographed print of "Stanzi" — which includes Stanzi's memorable quote, not to mention an American flag background and his autograph — at a charity auction benefiting the University of Iowa Children's Hospital.

Seriously, how many Hawkeye fans want this? I bet there isn't a single one who doesn't envision it hanging somewhere in his/her house. The only thing that could make this better is if it had a button you could push that plays his quote. Priceless.

So it looks like the Ferentz family is gonna be the winning bidder on the "Stanzi" pic.twitter.com/6ICrlobB