A Day at BTN: Spartan coaches do our jobs 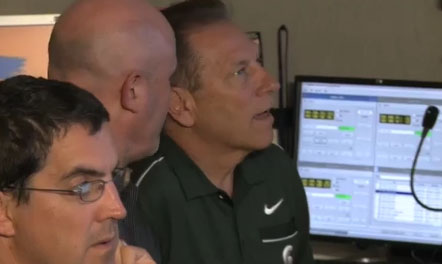 Perhaps you heard BTN entertained Michigan State coaches Wednesday in our Chicago studios. Mark Dantonio, Tom Izzo and the rest of the coaches were in town as part of the athletic program's Michigan State coaches tour. What better way to spend the day at BTN than give the coaches a chance to do what we do on a daily basis, we thought? Yep, we had the coaches put on a live show. From production to graphics to makeup artists to analysts, everyone had a role. Watch MSUSpartans.com's behind-the scenes video of the experience now.

"I would say that was as much pressure as they've faced, maybe short of a championship game," Pizzo said.

These coaches are used to pressure, though. This was just a different form of it.

"It's a pressure situation, just like being a coach or student-athlete," women's golf coach Stacy Slobodnik-Stoll said.

It wasn't as easy as the coaches made it look. They only had 25 minutes or so to prepare for their first show, which is a lot less time than our professionals often receive.

But they got it done. And they left our studios with a much better understanding of what BTN and other networks go through every day to showcase their teams and student-athletes.

"I tell you what, there's an awful lot that goes into it," baseball coach Jake Boss Jr. said. "It's amazing how it goes off so smoothly."

"I have a new feel, a new appreciation for what these guys do," Dantonio said.