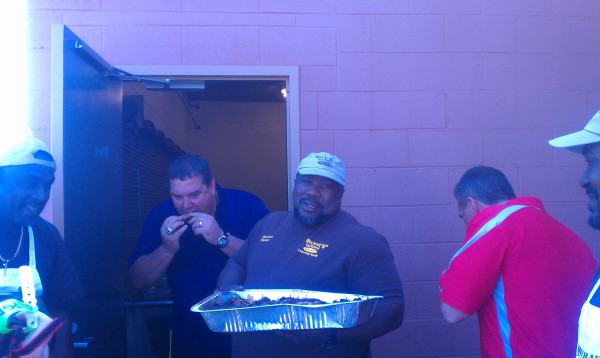 Wednesday was an interesting day in the revitalized Michigan-Ohio State rivalry. First, there was an action shot, courtesy of @MikeRothstein, showing Michigan's Brady Hoke and Ohio State's Urban Meyer eating ribs together at the Sound Mind, Sound Body camp near Detroit. Then, there was news that Hoke referred to Ohio State — which he always calls "Ohio" — as Ohio State. See the photo of Hoke and Meyer in this post.

Isn't this a nice change of pace? The rivalry really has heated up over the last several months, what with Michigan's sudden turnaround season, Meyer's hiring and, most recently, the heated battle on the recruiting trail.

It's great to see the rival coaches together — even if it was for no longer than it took to snap a photo of it. The best part of the whole thing, though, has to be that the picture was tweeted at 9:26 a.m. ET. Nothing like ribs for breakfast!