Mailbag: Are Buckeyes worthy of all the praise? 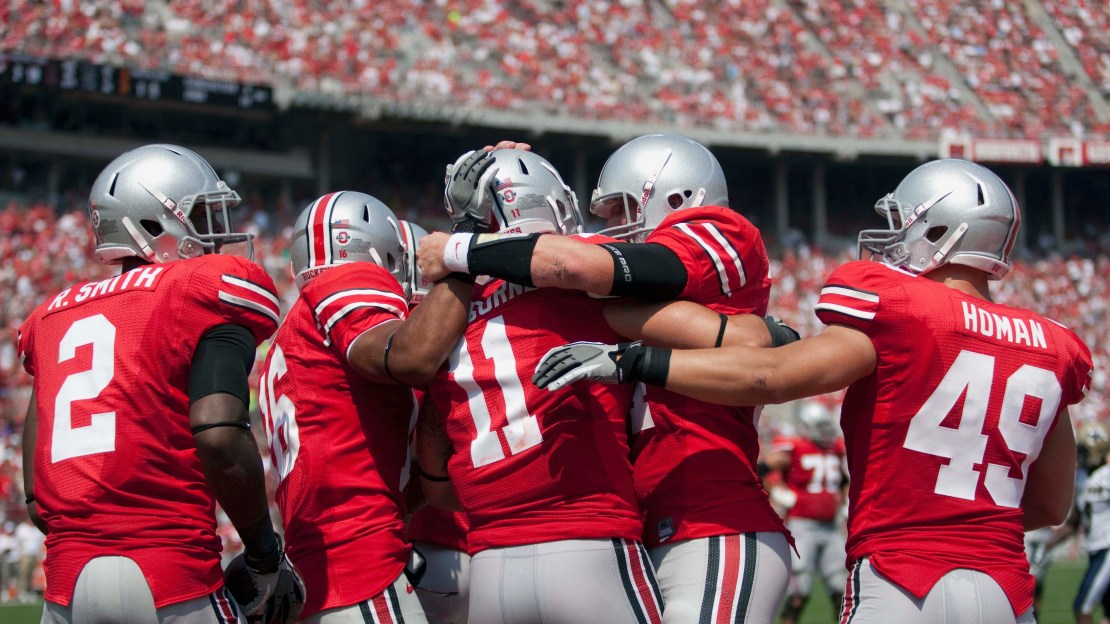 You have questions, and I have answers. With the calendar turning to June, the focus is on football, as you can see from the questions below. Answering these queries got me thinking: Are Michigan State and Ohio State the best teams in the Big Ten? Find out in this post. Also, have you checked out my 2012 weekly schedule analysis series, which just reached Week 13 yesterday, or my archive of Big Ten rankings?

I don?t think Ohio State and Michigan will ever be placed in the same division. But, I agree with you: They should be in the same division. And, as you noted, Auburn and Alabama are both in the SEC West-and that hasn?t diminished the rivalry or the SEC. So, there will come the day when Ohio State and Michigan meet on the final weekend of the regular season-and then meet the next week in the Big Ten title game. I think that?s what TV execs would love to have happen.

By the way: If Michigan and Ohio State were in the same division, I?d move Michigan to the Leaders and have Wisconsin take its place in the Legends.

The guy you call the best passing quarterback in the Big Ten is in eighth-best situation? What kind of logic is that? – Alan Brommel

I ranked quarterback units. Not individual. The backup situation at Iowa is filled by redshirt freshman Jake Rudock, who never has played. So, the totality of the quarterback situation in Iowa City isn?t that strong. Again, Vandenberg carries his end of the situation.

In fact, I rank him as the No. 2 quarterback in the Big Ten.

Do you think Michigan State?s defense can slow down Denard Robinson? I think that our D can contain the speed of D-Rob. What do you think? – Sameer Gadola

So, Michigan State has had good success bottling up Robinson. And many Spartan watchers think this year?s MSU?s defense may be Mark Dantonio?s best yet.

Michigan State defensive coordinator Pat Narduzzi is awesome. Any chance MSU tries to keep him by offering him a coach-in-waiting spot? I'm torn on whether it's smarter for great assistants to leave and run a mediocre program, as opposed to staying with the same program for years, much like Tom Izzo did in basketball. Personally, I favor consistency and love Narduzzi's defensive mind. I would love to keep him on the staff and lock him in as a head coach in five or 10 years from now, depending on how long Mark Dantonio wants to stay. – Matt

I think we may have seen the last of the ?head-coach-in-waiting? scenarios. While it sounds good in theory, it typically hasn?t panned out and is rife with potential issues. As much as you and the MSU Nation would love to keep Narduzzi, I think he?s bound to bolt very soon. He?s too good-and he isn?t getting any younger (46). In fact, I recently rated him as the Big Ten assistant who is most primed to be a head coach.

Will my Hoosiers make a bowl next year? – Ryan Eaton

I love my Indiana football questions! And I love what Kevin Wilson is doing in Bloomington. The offseason hiring of Seth Littrell as offensive coordinator should enhance the passing game and offense overall. But how about the defense? That?s the area that will determine Indiana?s fate.

So, Indiana probably won?t go bowling in 2012; too much work to do on defense. But I could see the Hoosiers in the postseason in 2013 with continued improvement.

How can you leave Ohio State?s Ryan Shazier off of this list of top 10 linebackers? – Kevin
You most definitely could make a case for Shazier to be on the list. He had a heck of a freshman season in 2011. But I just felt he hadn?t done enough to this point to merit inclusion. Shazier was sixth on the Ohio State in tackles with 57 and had just five tackles for loss and three sacks. His time will come. Be patient.

No mention of Penn State's Michael Mauti on your list of top Big Ten linebackers? Provided he's recovered from his knee injury, he's the best linebacker in the Big Ten. – Steve

That?s just it with Mauti: Will his health be OK? If I knew that for sure, he would have been on my list of Top 10 Big Ten linebackers.

For 2012, could you see Illinois going to the Rose Bowl? Or do I need to be more realistic about this season? Also, could Nathan Scheelhaase win a national award at quarterback this season? – Eric Watkins

Illinois? In the Rose Bowl? This season? As much as I like Tim Beckman and his new staff, I have a difficult time envisioning that transpiring. The offense must show it has playmakers at receiver and running back. And how do you replace the dynamic Whitney Mercilus on defense? But the Illini?s biggest obstacle figures to be Wisconsin in the Leaders Division. Give Beckman time. As for Scheelhaase, he?s a long shot to win any national awards. But, I guess it could happen, if Illinois ends up contending in the Leaders. But, as I said, I think that?s a long shot for 2012.

It isn't a surprise that Penn State's out of the top 25. What is a surprise is the collective praise Ohio State is getting from virtually everybody. – Eli

Why no love for the Buckeyes? I think they may be the most talented team in the conference. And I think there?s a good chance that Ohio State could post the best record in the Big Ten. The defense is going to be outstanding. The big key will be the new spread offense. Can quarterback Braxton Miller execute it? Will receivers step up? Is the retooled line OK? Bottom line: Fear the Buckeyes, who will be motivated to dominate in the regular season knowing they can?t win the Big Ten or go to a bowl.